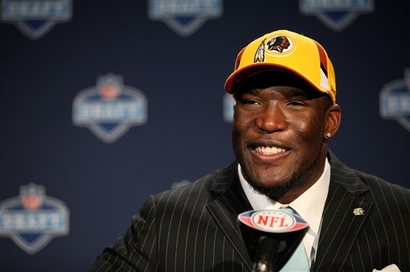 Forgive us, even though this is the day after the NFL draft, our minds and attention have been focused squarely on the Washington Capitals, who are fully engaged in a playoff battle with the New York Rangers. Tomorrow we’ll gladly dive in and get started on the newest Redskins players, but in the meantime, we’d like to encourage folks to take a look back at the series of interviews we did last week heading into the draft.

Here’s who shared their perspective and a small sample of their answers:

Who would be the riskiest pick at 13?

A trade into the top 10 that nets them USC quarterback Mark Sanchez. It would probably cost the Redskins their 2010 first-rounder and I always hate when a team deals a future first-rounder and the return isn’t a veteran player. And Sanchez has started for only one year. How long will it take for him to get ready? Can he be a franchise passer?

Who would be the safest pick at 13?