All posts in baseball

Washington Nationals starter and first-ballot Hall of Famer Max Scherzer did everything within his power to secure a victory over his former club, the Arizona Diamondbacks — striking out 10 while allowing no runs, two hits and two walks over seven innings.

In fact, his outing was so impressive that the 36-year-old actually surpassed the legendary Cy Young for the 22nd-most strikeouts (2,807) of all-time. And yet, Scherzer’s heroic effort was nearly wasted because of Washington’s inability to produce anything resembling a coherent offense.

While Scherzer is easily one of the most intense and competitive athletes in professional sports, he’s probably willing to live with a no-decision on this day. That’s because left fielder Kyle Schwarber picked a fine time for his first home run as a member of the Nationals, launching a towering solo shot to the ballpark’s second deck in the bottom of the ninth inning to end the game 1-0 in the most dramatic of fashion.

When Sixto Sanchez dreamed of winning his first home game, it’s safe to say this wasn’t how he envisioned it playing out. The highly-touted youngster won his major league debut in an empty ballpark nowhere near Miami to split a doubleheader against the Washington Nationals, 5-3.

Thanks to a COVID-19 outbreak that resulted in 17 Marlins players being sidelined, an early-season matchup between these two teams was called off. A month later, Major League Baseball rescheduled the game as a doubleheader in Washington, with the Marlins labeled the home team during the nightcap.

Home runs by catcher Yan Gomes and outfielder Victor Robles were not enough to keep Washington from falling to 10-14 on the season.

Pitcher Max Scherzer wasn’t at his best — allowing four fifth-inning runs — but the three-time Cy Young Award winner was good enough to earn his second victory of the season.

Once Scherzer’s day was done, Kyle Finnegan, Tanner Rainey and Daniel Hudson retired seven straight batters to halt Miami’s potential rally and secure a 5-4 victory in the first game of a doubleheader.

All seemed right in the universe as the Washington Nationals jumped out to an early lead and were cruising to an apparent victory against the rebuilding Baltimore Orioles.

That is, until relievers Sean Doolittle and Daniel Hudson imploded in horrific fashion during a cover-your-eyes collapse that turned a three-run lead into a 5-3 loss. Homers by Pat Valaika, Pedro Severino and Anthony Santander sparked the Orioles’ comeback and left Doolittle searching for answers.

“I should be able to get through an inning and it just hasn’t come together. I feel terrible. I’m letting the team down. I want to help. I want to be a part of that group,” said Doolittle, who now sports a 18.00 earned run average in four appearances this season. The loss drops the Nationals to 4-7 on this season, which is troublesome because they have yet to play a game away from Nats Park.

The Toronto Blue Jays hosted the defending World Series champions, the Washington Nationals, during an early-season matchup at Nationals Park. If that sentences baffles you, you’re not alone. Welcome to life during a pandemic.

Thanks to COVID-19, the Blue Jays are unable to play games at their Toronto stadium. While the long-term plan for the abbreviated 2020 season involves playing at a Triple-A ballpark in Buffalo, the Blue Jays had to settle for a few empty ballpark home games in D.C. in the interim.

Outfielder Michael A. Taylor’s second home run of the season and a two-run double by catcher Kurt Suzuki helped Washington pick up consecutive wins for the first time this season. Relief pitcher Ryne Harper got five outs in the 6-4 win and closer Daniel Hudson notched his first save. 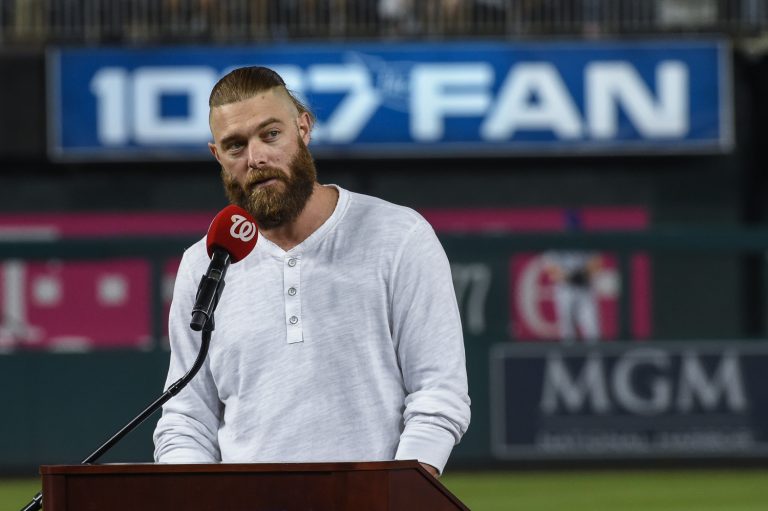 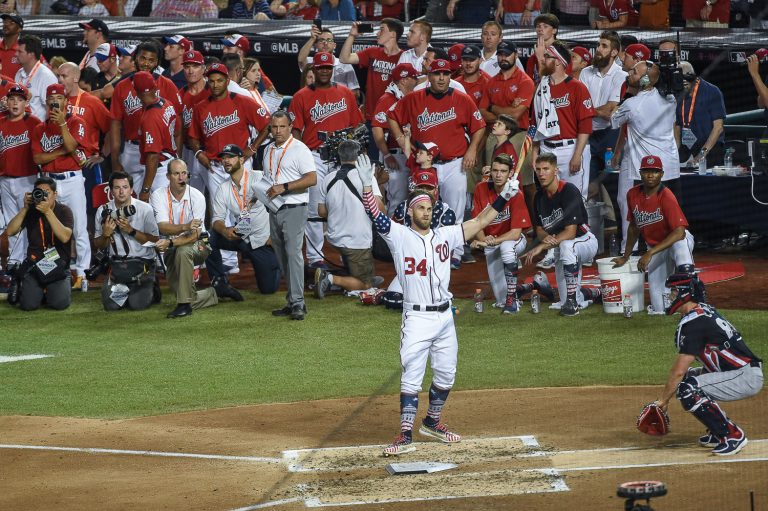 With all eyes on D.C. for All Star weekend, Washington Nationals slugger Bryce Harper delivered the goods — winning the 2018 Home Run Derby in dramatic fashion.

Harper started slowly in the final round, before heating up with nine homers in his final 50 seconds to edge out Chicago Cubs outfielder Kyle Schwarber with his final swing of the bat.