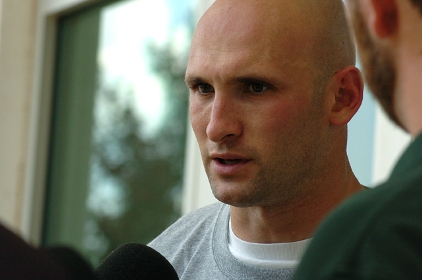 Like anyone else, fans of the Washington Redskins are cautiously optimistic that this weekend will be the next step in seeing their favorite team return to glory. To help prepare folks for this weekend’s festivities we asked some local experts to share their take on how things might possibly shake out when the Redskins are on the clock. So far we’ve heard from Matt Terl, Ryan O’Halloran, John Keim and Larry Michael. Our fifth and final interview is with Matt Bowen a former member of the Redskins who now writes for the National Football Post.

I think the offensive tackle position is what they should look at. Now, there’s four studs there and while the talk about [USC’s Mark] Sanchez, the quarterback, is nice and gets people excited, puts fans in the seats and sells jerseys, for them to win now I think they need to look at adding some young talent to the offensive line. They’re old on the offensive line and could use an upgrade there.

That could be considered a surprising take, coming from a guy who played safety?

I know how it is. If your team can’t get to their quarterback, then you’re a sitting duck out there in the secondary. And you don’t want that. On the other side, when a quarterback doesn’t have a lot of time, that’s when interceptions, sacks and fumbles come.

I think when Dan Snyder starts to really like a player, he’s going to do everything he can to get him. I also think that everything that comes out of Washington is pretty true. I think the Washington Post does a great job of covering that team and are usually pretty truthful in what they print. But yeah, I think the best-case scenario for that front office would be to get Mark Sanchez in a Redskins uniform … and to play him too.
I would not be shocked if you had to trade with the Rams to get him at two. I wouldn’t be shocked because the Rams really want to move down. They want a tackle and there’s four available, so they can still get one if they move down.

I don’t know if they can get one all the way down at 13 and I don’t know if the Redskins have the amount of picks to get up to number two or number three with Kansas City – they’ll probably have to give up their first rounder next year, but typically Dan Snyder doesn’t have any problem with that. He doesn’t build teams through the NFL draft. He builds teams through first-round talent and free agents.

So when it’s all said and done, who do you think the Redskins end up with after the first round is complete?

My guts says they’re going to get Sanchez because I know that organization. I think they’re going to do everything they can to get him. If they can’t get him, then they get Orakpo. Those are my top two choices for them.

Orakpo would be good under Greg Blache because he’s such a demanding coach and a great coach. He’s one of the best in the league, and he demands that his players play hard and produce. He’s just like Gregg Williams was there.

One bonus question for you – do you have fond memories of your time with the Washington Redskins?

Oh, of course I do. I have fond memories of every team I played on, but I spent the most time of my career playing football in D.C.

I had a great time and my wife and I loved living there. She taught high school science in Virginia. It’s a great area to live. They have some of the best fans I’ve ever been around. I mean, they’re diehard fans. You wouldn’t even know there’s a baseball, basketball or hockey team there – it’s all Redskins, and it’s a great place to play.

Plus you play in the NFC East and that’s the best football there is. It’s the biggest market. It’s the biggest city. They have the best fans and I really liked the coaching staff there. I still have a great relationship with Gregg Williams. He’s one of my all-time favorites, he really is. And I loved Steve Spurrier. I really did. I know he got a bad wrap during his time there, but the guy really cared about his football players and there’s something to be said for that in a day and age where it’s all business, all the time.