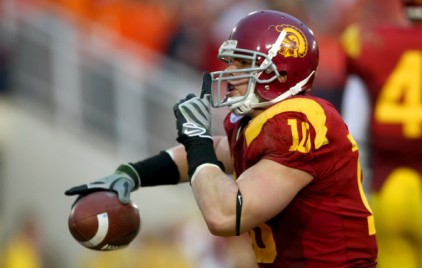 Like anyone else, fans of the Washington Redskins are cautiously optimistic that this weekend will be the next step in seeing their favorite team return to glory. To help prepare folks for this weekend’s festivities we asked some local experts to share their take on how things might possibly shake out when the Redskins are on the clock. Up first, Redskins official blogger Matt Terl.

I don’t think there’s a lot of debate here: youth at left defensive end, an every-down right tackle, and strong-side linebacker (unless the coaches know something about Robert Thomas and/or moving Chris Wilson that we don’t).

I don’t see a lot of risky picks falling to 13. At one point, I would’ve projected Andre Smith in that role here, but it certainly looks like he’ll be a risky pick in the top 10 instead. So let’s see …

Smart pick: tough to say, not knowing who’s gone. If any of the four big-name tackles lands here, I think that’s the smart pick. I’d be thrilled to come away with a Michael Oher.

Safe pick: Brian Cushing, I think. He fills a need, seems unlikely to be a bust, and will almost certainly be available.

Risky pick: After the endless rumor cycle of the last week, do you have to ask? Mark Sanchez. Even if he falls to here – which seems exceedingly unlikely – he doesn’t fill a need, will enrage a portion of the fanbase … but might pay huge dividends down the line. Seems like the definition of risky to me.

Well, the four top tackles plus the next few guys down the line – Britton, Phil Loadholt, maybe Beatty – if they can move back.

Aaron Maybin, if they believe he can play off the left side. Brian Cushing. Ray Maualuga.