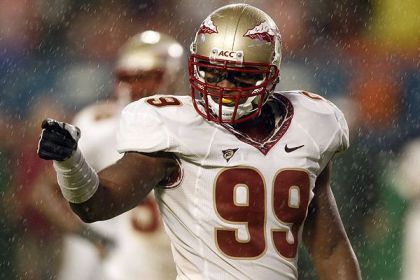 Like anyone else, fans of the Washington Redskins are cautiously optimistic that this weekend will be the next step in seeing their favorite team return to glory. To help prepare folks for this weekend’s festivities we asked some local experts to share their take on how things might possibly shake out when the Redskins are on the clock. We’ve heard from Redskins official blogger Matt Terl, up next – beat writer Ryan O’Halloran of the Washington Times.

Left defensive end. Phillip Daniels and Renaldo Wynn are great guys and everything but do the Redskins really want to head to the Meadowlands for Week 1 with a two-man rotation of over-30 ends? They shouldn’t. The Redskins need to boost their pass rush or it won’t matter how good DeAngelo Hall and Carlos Rogers are in coverage.

Offensive line. This rebuilding effort has to start sooner rather than later and the Redskins have to take it seriously. The “Todd Wade Left Guard Experiment” didn’t work in 2006 and Pete Kendall cost them two draft choices. The Chad Rinehart Project won’t pay a dividend this year, which forced the Redskins to bring back Derrick Dockery.

Smartest pick: A defensive end who is big enough to play in a 4-3 scheme yet as an ability to rush the passer. Candidates would include Penn State’s Aaron Maybin and Tennessee’s Robert Ayres. I don’t expect Texas’ Brian Orakpo to be around.

Safest pick: Probably USC linebacker Brian Cushing. He’s capable in coverage and appears to be physical enough to play the run right away. He didn’t rush the passer much in college so that part of his game would require development.

Riskiest pick: A trade into the top 10 that nets them USC quarterback Mark Sanchez. It would probably cost the Redskins their 2010 first-rounder and I always hate when a team deals a future first-rounder and the return isn’t a veteran player. And Sanchez has started for only one year. How long will it take for him to get ready? Can he be a franchise passer?

Now this is dangerous stuff, trying to get inside the minds of The Danny and The Vinny. If it’s up to them, they trade into the top 10 and grab Sanchez. More than likely, they stay put at No. 13 and draft a defensive end. But for all I know, they could be targeting a receiver … again.

Since I talked about Cushing already, I’ll mention Maybin. He has good height (6-3.5) and weighed in at 250 pounds during the Combine. But he was very productive as a senior (20 tackles for lost yardage, 12 sacks) and his athleticism would give Greg Blache some options and move him around.

Everette Brown from Florida State put up some huge numbers last year (14.5 sacks, 21.5 tackles for lost yardage). The Redskins could trade down in the low teens or high 20s to get him. At 6-2 and 256 he would pose match up problems for bigger offensive tackles.

I’m interested to see what kind of interest the Redskins have/had in Rey Maualuga. The Redskins are set at MLB but maybe they think Maualuga is smart enough to make the quick transition to outside linebacker.

As Vinny put it the other day, the scenarios are trade up, trade down or stay put. The most likely I think is trading down. The Redskins have only one of the first 79 picks and that’s not the ideal way to get younger. If they like Michael Oher from Mississippi and they see him slipping, expect a trade down.
Ultimately, I’ll predict they trade down and draft Florida State’s Everette Brown.