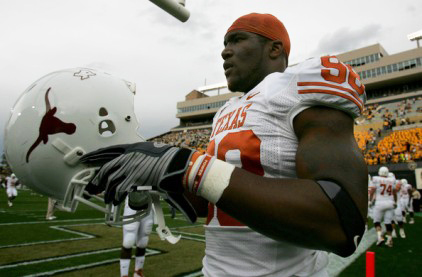 Like anyone else, fans of the Washington Redskins are cautiously optimistic that this weekend will be the next step in seeing their favorite team return to glory. To help prepare folks for this weekend’s festivities we asked some local experts to share their take on how things might possibly shake out when the Redskins are on the clock. So far we’ve heard from Matt Terl, Ryan O’Halloran and John Keim. Now it’s time for Larry Michael, the voice of the Washington Redskins.

I think most of the analysts over the last couple of months have pretty much got it on the nose. I mean, you’re looking for some help at linebacker – outside linebacker, strong-side linebacker. Also, if you could find a defensive end who could contribute or possibly a lineman. I don’t know if there’s another position that’s in desperate need of help, but you never know.

The “best player available” theory could come into play. We saw it last year and this year we’ll see the dividends of the guys who got picked last year. I think at 13 though, you’re looking for someone who is going to start for your team.

I’m beginning to sound like Vinny [Cerrato] here, but there’s no way of knowing until you know who gets picked ahead of time. My personal opinion is – with linebacker and defensive end – I don’t think you can go wrong with either one of those positions if you can get a starter. You’ve got some veterans on the defensive line and defensive end and you’ve got some guys who are kind of penciled in as the strong-side linebacker, but you could augment those two positions. Any one of the names you’ve heard mentioned, like the USC linebackers or Orakpo or Maybin if they were available at 13, who could potentially come in and start.

Riskiest? Well, I like Andre Smith because he’s fought through all this adversity. Now some of these wounds are self inflicted with what happened at Alabama and the combine. He certainly can play and is massive and I kind of like him. But at the same time, as far as the Redskins are concerned, I don’t know if they necessarily need to pick a tackle with the 13th overall pick. I think all the really great tackles are going to be picked earlier and I don’t know enough about some of the other guys.

I think Smith is someone who can play in the National Football League, but he might be gone by the time they pick. He’s the one guy in the top 15 who has some suffering about him, but I think he’s overcome it. I think that shows something about the kid.

I can’t speculate on what the Redskins will do, but I know what I’d like to see happen, personally. I’d like to see them get someone who is a starter, whether it’s a starting tackle, a defensive end and linebacker. This time of year, speculation runs rampant and it kind of feeds itself. You can’t believe everything you hear. Like last year, I don’t think many people were prepared to see the Redskins do what they did. It was somewhat surprising to see them trade down and take two wide receivers and a tight end bang, bang, bang. It was like, “What are we going to do with these guys?”

Well, this year you’re going to see why they took them last year. I think Devin Thomas is going to have a great year. Malcolm Kelly is going to be healthy and ready to contribute and Fred Davis is ready too. I think the Redskins will just have to react to how everything unfolds in front of them. I really believe things don’t get going until the draft starts because every person who gets picked before you impacts what you might do. I think that’s the fun of it.

I can’t give you one name, but I think if they stick with 13 they’d be happy to get someone like Orakpo. I know I’m copping out a little bit, but I think if they get to their pick and have a choice between two or three of those guys we’ve identified, they’d be happy. Orakpo would be outstanding. He could step in and help the team, same with any of those USC linebackers.