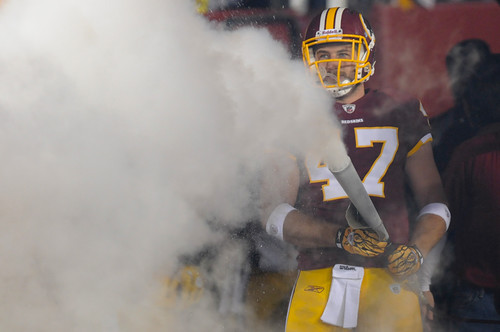 Last week, I headed over to Redskins Park one morning to talk with a few players during an open locker room session.

Unlike after a game, when most players are worn out and just want to get home as quickly as possible, the players are generally in a good mood during these media sessions and most guys are willing to sit around and bullshit with you for a while.

On this particular day, I was chatting with quarterback Kirk Cousins about rookie skits and his adjustment to life in the NFL. As we finished up, I thanked him for his time and headed around the corner to go see which other players were around.

Well, as I turned the corner I see Chris Cooley walking in the opposite direction. He sees me, gets a big goofy smile on his face and immediately throws up his right hand for an awkward white guy “high five.” Without missing a beat, I did the same. We slapped hands (awkwardly) and both of us kept walking without ever saying a word to each other.

As I mentioned last week, Cooley was one of two players remaining from 2005 — my first season covering the team. Over the years, I’ve had the pleasure of chatting with him countless times and always enjoyed my time around him.

As far as professional athletes go, Cooley is easily the most down-to-earth guy I’ve ever encountered. From the day he arrived in town until now, he hasn’t changed. He genuinely seems to enjoy what he does for a living and is always willing to take time out of his busy schedule for media members, fans and anyone else he stumbles upon.

If Cooley has an ego, he’s done a masterful job of hiding it. After all, he told me on more than one occasion over the years when Washington’s offense was built around getting the ball to Clinton Portis or Moss that he wouldn’t start Chris Cooley on his own fantasy football team.

He’s also the guy who once interrupted an interview between Fred Davis and I to tell me that he thought I could benefit from taking a pointer or two from his teammate’s fashion sense.

Upon seeing Davis’ wing-tipped shoes in such close proximity to my beat up Pumas, Cooley cut in to say, “You should dress more like Fred. I mean, the nerd look thing might work for you and all, but look at those shoes.”

All three of us cracked up and then Cooley was off — probably to find someone else to harass.

There was the time he managed to post a photo of both his playbook and his privates online or the time he switched to booty shorts to brighten up an otherwise mundane day of training camp. And the Captain Chaos coin toss. And the time he admitted to loving it when Tony Romo chokes. And the time he offended Cleveland Browns fans when he addressed trade rumors on his blog.

All of which adds up to easily the most entertaining player I’ve had the privilege of covering. In addition to being goofy and lighthearted, he’s always been brutally honest. And unlike some of his contemporaries in the world of professional sports, he truly cares about the city he plays for and the fans who help pay his salary.

Why else would the guy go to the trouble of helping out superfan Zema Williams when his tomahawk was stolen while he was signing autographs at a 2008 preseason game? None of his teammates went out of their way to lend Chief Zee a hand during his time of need. But Cooley was never really like everyone else, was he?

Which is why local fans found Cooley so easy to relate to. He never took himself too seriously and he never pretended what he was doing for a living was anything more than a game.

“Since I’ve been here, I’ve gotten used to winning ugly,” Cooley told me back in ’09. “We’re like Viagra – we always make it hard.”

And that’s why he’s been such a fan favorite. Forget clichés, Cooley always said what everyone else was thinking.

He was a man of the people. A loveable idiot. Someone fans could be proud to cheer for.

Just two years ago Cooley told me playing for the Redskins meant so much to him that he’d rather walk away from the game than play for another team.

“I’ve actually thought about that,” Cooley said. “Because the concept of me being traded is talked about on the radio and talked about in the media, my wife and I have talked about it. I have no intention of playing for anyone else. I only have a couple years left on my contract and I’d do another deal with the Redskins for sure, but if they traded me I’d try to find a way to not have to move and play somewhere else.”

Which brings us to yesterday’s news.

The longest-tenured Redskin was let go. After playing in 108 games for the burgundy and gold, Cooley was told his services are no longer needed. If the two-time Pro Bowler — who ranks fifth in franchise history for receptions (428), ninth in receiving yards (4,703) and ninth in touchdowns (33) — wants to continue his playing career, he’s going to have to do it somewhere else.

I understand football is a business and head coach Mike Shanahan had to do what he thought was best for his team, but that doesn’t mean I have to like it.

Cooley deserved to retire a Redskin. Not just because he’s the best tight end the franchise has ever had (which he is), but also because, like Cal Ripken Jr. or Darrell Green, Cooley was a pillar of his franchise who fans can’t imagine ever donning another uniform.

Personally, I don’t want Cooley’s career to end like this. While I agree it would be odd to see the 30-year-old play for another team, there is one scenario I’d be okay with.

Growing up, Cooley loved the Denver Broncos. As a 4-year-old, he used to wear his John Elway jersey while he played football by himself in his backyard. The team meant so much to him as a child that he actually cried when they lost.

If there’s any justice in this world, Elway will offer Cooley a one-year deal. He can be a reliable target for Peyton Manning and end his career playing for the team that meant the world to him growing up. It would be tough for ‘Skins fans to see him sign with another team, but at least they would know how much the Broncos have meant to him over the years.

For as much joy as he’s brought everyone else over the last eight years, Cooley deserves to be happy.