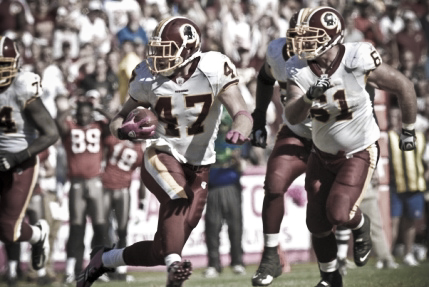 The Washington Redskins’ offense would be hard pressed to look worse than they did in the first half against the Tampa Bay Buccaneers.

In six possessions, the ‘Skins were truly offensive – punting three times and turning the ball over three times.

The hometown crowd quickly grew restless as they helplessly watched a sorry Bucs team that couldn’t even gain a first down until the third quarter one week earlier head into halftime with a 10-0 – despite the Bucs being on the road with a virtually unknown quarterback making his first career start.

But thankfully, the Redskins turned to tight end Chris Cooley early and often in the third quarter and order was restored. We caught up with the rockstar tight end after the game to, first and foremost, thank him for saving the team’s season.

We’re going to be completely honest – that first half was awful. But then this Pro Bowl tight end came along and caught a crucial touchdown pass early in the second half and showed this team that it’s okay to put points on the board. How big was that catch?

“I think it was big in a lot of ways because we really worked on a great drive to get the ball down the field, we had some good conversions and got over a huge hump as far as getting in the red zone and made a big play for a touchdown,” Cooley said. “So I think it was big for us.”

“That was an outstanding call,” he said. “Momentum was in our favor. We make a big play defensively. We come out and go play action on them and give it to our best playmaker. It was just such a good call and a greatly executed play.”

With points being so tough to come by, what do those two plays do for the confidence of this offense?

“It’s so frustrating when we come out and score zero points in the first half and have no yards,” Cooley said. “We all look around and it’s like, ‘Fuck. We practiced our asses off this week. What the hell is going on right now? We’re better than this.’ I think it was just a relief that we CAN score points. We are a good football team.”

Was the first half a result of the Redskins not getting it done or the Buccaneers doing something right?

“No, we weren’t executing,” he said. “We were throwing balls into coverage. We weren’t winning on routes. We were giving up too much pressure. We didn’t have a great running game. We were not executing and we were doing what we did in Detroit. It was the players. Put it on us.”

Well, if nothing else, this team is learning to win ugly, right?

“Since I’ve been here, I’ve gotten used to winning ugly,” Cooley said. “We’re like Viagra – we always make it hard.”

People can say whatever they want about Cooley, but there are two indisputable facts – he’s always entertaining and he truly cares. His brutal honesty about the offense failing on every level in the first half is truly appreciated – especially after hearing his coach try and tell fans the Redskins are improving moments after giving the Lions their first win in two seasons.

No one knows for sure how this season will play out, but if the Redskins are going to be successful on offense, it will be because they wisely opted to put the ball in Cooley’s hands as often as possible.