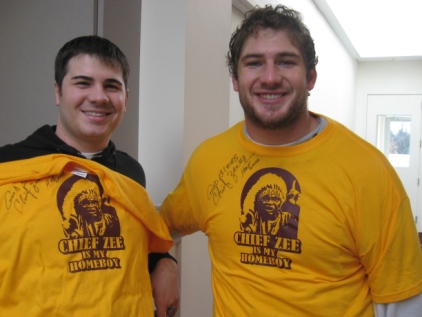 Let’s go back to better days. Back before the wheels officially came off on the 2008 Washington Redskins. Back when cautious optimism was the overwhelming feeling throughout D.C. Let’s go back to August.

Some fans may remember that ‘Skins superfan Zema Williams, who is better known as Chief Zee, had his tomahawk stolen while he was signing autographs before the preseason game against the Buffalo Bills.

“I had that thing for 25 years. Anytime you saw me, I had my little tomahawk,” Williams, told The Washington Post at the time. “I don’t see what they would do with it, but I’m sure whoever took it was playing a trick. I sat in the parking lot long after the game was over thinking someone would come out with it.”

“It was actually Christy,” Cooley said. “We were sitting in Starbucks and we were just reading the paper – and we don’t read the paper all that often, but we were sitting in Starbucks, having a coffee and reading the paper and she said, ‘Look at this. Someone stole the Chief’s tomahawk.’ She’s been a Redskins’ fan her whole life and knows all about the traditions and all that stuff. She said we should use the blog to get it back, so I called Tanner right away and we put something up.”

In an era when players commonly choose the biggest payday over team loyalty, Cooley bucked the trend by getting involved when he didn’t have to.

“With them putting that out to help get my tomahawk back, it just goes to show you,” Williams said. “I really didn’t think anyone would care. With someone like Cooley stepping up, that gives me more reason to go out and do my part and to spread the good word to fellow fans around the world. I really would like to thank the Cooleys for all their help.”

Instead of dwelling on all of the negatives surrounding the team these days, we figured we’d share one story that has a happier ending. Those interested can purchase the “Chief Zee is my Homeboy” t-shirts here.