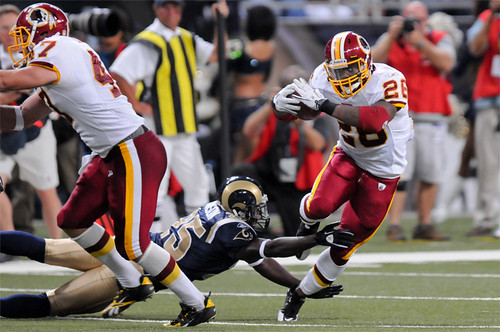 For eight seasons now, I’ve been fortunate enough to cover the Washington Redskins from the sidelines. Each and every Sunday, I do my best to capture compelling photos of all of the action (while not getting run over in the process).

Recently, I came to the harsh realization that only two players have been on the team during my entire time covering the Redskins — tight end Chris Cooley and receiver Santana Moss.

I briefly contemplated trying to figure out how many players have come and gone over the last eight years before quickly deciding some things are better left unknown.

For better or worse, the two most compelling players to don the burgundy and gold during my time covering the team are safety Sean Taylor and running back Clinton Portis.

Taylor’s disdain for the media only enhanced his “speak softly and carry a big stick” mindset. He wasn’t interested in talking about much of anything. As far as Taylor was concerned, his game did the talking for him.

And then there was Portis, who clearly never met a microphone he didn’t love.

During his seven seasons in Washington, Portis captivated ‘Skins fans both on and off the field.

From his very first rushing attempt with the Redskins (a 64-yard touchdown run against Tampa Bay) until his last (a three-yard gain against Tennessee), Portis owned this town.

With 6,824 rushing yards and 46 touchdowns, Portis walks away from the game trailing only John Riggins in the franchise’s record book. Forget the concussions and/or groin injuries that ultimately forced the University of Miami product out of action.

For the bulk of his time here, Portis was the face of the franchise.

He was the workhorse Joe Gibbs desired when he came back into our lives. He was the most dependable option on an offense that was never able to get consistent production from the quarterback position. And during his prime, he was willing and able to put the rest of the team on his back and take over ball games.

The second-round pick was never the biggest player on the football field, but that never stopped him from being physical. Rather than sitting around waiting for defenders to hit him, Portis went out of his way to initiate contact. His ability to blow up a blitzing defender while pass blocking is unrivaled.

The Redskins have made the playoffs just twice since 2000, and both of those instances came courtesy of Portis. His 1,516 rushing yards in 2005 set a franchise record. His five rushing touchdowns during the last month of the ’07 season made it possible for the team to sneak into the postseason on the final day of the season.

When things were going well in Washington, it usually was because of Portis. Likewise, when things got ugly locally, Portis was typically in the middle of it as well.

Whether he was creating alter egos or honoring his fallen teammate, whether he was throwing teammates under the bus or coming up with new and creative ways to get out of practicing, Clinton Portis WAS the Redskins.

“Clinton provided excitement from the very first time he touched the ball as a Redskin and we were lucky to witness every ounce of energy, effort and passion he has given ever since,” said owner Daniel Snyder. “We have been through a lot both on and off of the field and we would like to wish him and his family the very best. He will always be a Redskin and go down as one of the franchise’s all-time greats.”

He was far from perfect and completely capable of driving his coaches, teammates and fans nuts, but Portis made football fun.

All in all, it’s safe to say there will never be another player quite like Portis.

“I never cheated myself, and I gave everything that I had to this organization and to this Redskins nation, to this D.C. nation,” Portis said. “I love this area, and I will always feel a part of this community.”

Some might forget, but Portis won a national championship at Miami, earned rookie of the year honors in Denver and broke the Redskins’ single-season rushing record, all before he turned 25. For a few years, it appeared there was nothing the two-time Pro Bowler couldn’t do.

“I had him in Denver and drafted him,” said head coach Mike Shanahan. “I remember taking a look at him and I said, ‘This guy is probably the most physical back I’ve ever been around.’ The way he would pass protect, he was just so tough. It didn’t matter if it was a linebacker or a defensive lineman; he was going to stick his face in there. He never held back anything. He did such a great job running for us and had so many good plays. When I say ‘us,’ at that time I was in Denver. When he came here, even though it was the end of his career, he was still as tough as he always was. He was a natural leader. I really enjoyed being around him.”

While it’s highly doubtful Portis will one day be enshrined in Canton, he absolutely retires as one of the best to ever play for the Washington Redskins.

“I think if the measurement for the Hall of Fame, if they can add my biggest attribute, which was heart, I would definitely be there,” Portis said. “But for just the numbers, I’m not sure.”

Regardless of how the rest of the football-watching world chooses to remember Portis, he will always be a “core Redskin.” Flaws and all, there isn’t another running back ‘Skins fans would have rather had during those years and for that I can’t help but wish Portis the best of luck as he officially closes this chapter and moves on to whatever comes next.

[Editor’s note: Any Redskins fan who is feeling nostalgic should absolutely go back and read this 2007 interview. During the course of our conversation, Portis and I chatted for 18 minutes about everything from his disappointment on draft day to wearing a pro wrestling-style championship belt on the sidelines to playing for Joe Gibbs. It’s a must-read for anyone who enjoyed the Clinton Portis era in Washington.]