everything’s riding on the offensive line 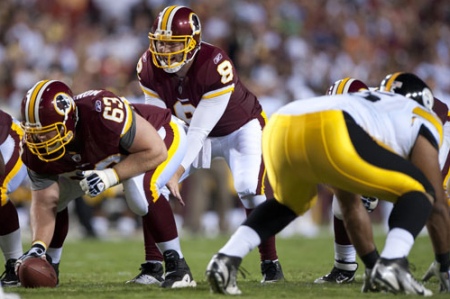 As the Washington Redskins head up the beltway to take on the Baltimore Ravens in the all-important third preseason game, it’s important to pause and reflect on the state of the franchise.

The Redskins, inexplicably, are tops in the NFL in offense and defense.

In all likelihood, that ends tonight when Washington takes on a highly-motivated Ravens team that cares a little too much* about preseason games.

*Seriously, I don’t care how you try to spin it – calling a timeout with roughly eight seconds remaining to run up the score in a blowout is bush league. The Kansas City Chiefs had every right to call Baltimore out on it and I can’t help but think that if the Redskins had pulled a stunt like that the world would have ended.

Talking heads would still be ranting and railing against the Redskins while columnists and talk radio hosts devoted an entire week to figuring out once and for all if head coach Mike Shanahan let Daniel Snyder call the play.

Make no mistake about it – Baltimore will provide a much-stiffer challenge than Pittsburgh or Indianapolis.

The Steelers were caught flat footed in the preseason opener, which is why coach Mike Tomlin put a foot in his team’s collective backside and, in related news, Pittsburgh routed Philadelphia the following week.

The Colts are a different story because, simply put, they don’t care about the preseason. With or without Peyton Manning in the lineup, Indianapolis is content to save their wins for the regular season. That’s why they’ve lost eight consecutive and 24 of their last 28 preseason games.

But for whatever reason, the Ravens really, really care about looking good during the exhibition season. It’s why head coach Jim Harbaugh kept his starters in the lineup into the third quarter last week and why Baltimore has even used trick plays during previous preseason games against Washington.

The Ravens basically feel like, “if they’re keeping score, we might as well try to win it.” So don’t think for a minute they won’t go for the kill if given the opportunity against the Redskins.

And you know what – that’s perfect. Bring it, I say.

If at all possible, I’d like to officially request that the Redskins play Baltimore in the third preseason game from now on because these players will get a lot more out of playing a highly-motivated opponent like this rather than lining up against a Colts team content to go through the motions.

There are so many new faces in the Redskins locker room that a game like this is a necessity. Head coach Mike Shanahan and his staff will learn more about the makeup of this roster in this game at Baltimore than at any other point this season.

Can John Beck really be Washington’s long-term solution at quarterback? Can he finally be the player who fills the void and ends the revolving door at football’s most important position?

Which of the running backs has what it takes to step up and claim the starting job? Will Tim Hightower continue to keep two hands on the football? Can Roy Helu, who currently ranks fourth in the league in rushing yards this preseason, continue to post solid numbers against a Ravens defense that routinely ranks among the NFL’s elite? Will Evan Royster be able to match his solid outing against the Steelers?

Which receivers will still be in town once the 53-man roster is set? Can Leonard Hankerson go one week without driving ‘Skins fans crazy after dropping routine catches? Is Brandon Banks too small to survive a full 16-game season?

And that’s just a few of the handful of questions facing the Redskins on one side of the ball. But for my money, the must-see matchup this week is Washington’s offensive line versus the Ravens’ always-aggressive defense.

Right now, everything looks pretty awesome in the land of burgundy and gold. Rex Grossman lines up with the starters in the opener and proceeds to systematically pick apart Pittsburgh’s defense.

One week later, the Redskins trot out Beck, who hadn’t thrown a meaningful pass since the 2010 preseason finale, and he has his way with the opposition.

Both quarterbacks finish their game with a QB rating over 100, and suddenly Redskins fans aren’t nearly as cynical about the team supposedly tanking the season for a shot at Andrew Luck.

If that’s not enough, the Washington ground game has been equally impressive. Heading into the Ravens game, the Redskins boast three running backs in the top 25 in rushing yards: Helu is fourth, Hightower is fifth and Royster is 25th.

You know what all of that says to me? That the offensive line is making strides.

Don’t look now, but a unit that has been Washington’s biggest weakness over the last decade continues to inch towards respectability.

If the Redskins are going to be successful in 2011, left tackle Trent Williams will likely be the biggest reason why. Everything on that line starts and stops with the second-year pro.

Williams still has flashes of inconsistency, but there’s a lot to like in his game. Watching him manhandle Colts standout Dwight Freeney on Hightower’s 58-yard run was honestly the highlight of my week.

There’s nothing like watching a player impose his will on one of the game’s elite performers. Sure, Freeney got him back by bull-rushing Williams a little while later, but I still have high hopes for the 23-year-old.

Right tackle Jammal Brown is another player I’m excited to see this season. He was a guy who was hampered by a hip injury for much of 2010 – so much so that he wondered if he’d ever be able to return to his Pro Bowl level of play.

But by the end of last season, Brown started to regain his confidence and it showed on the field. If Williams and Brown can handle to outside of the line, the Redskins offense will be in great shape.

Kory Lichtensteiger and Chris Chester are Washington’s starting guards, and while neither has the same name recognition as the tackles, they both appear to be playing well so far this preseason.

The best thing you can say about an offensive lineman is that you didn’t notice him, and neither of these two guys has drawn the ire of ‘Skins fans in the way that players such as Casey Rabach and Stephon Heyer notoriously did.

Finally, the man in the middle is Will Montgomery. He comes to the starting lineup without much fanfare or attention, but he could very well be the sleeping giant on this line.

The guy is strong as an ox. Other players love to stake their claim as the team’s strongest man, but my money would definitely be on Montgomery.

Running plays were hard to come by last year because, too often, Rabach would end up losing his individual battles at the heart of the offensive line.

Conversely, Montgomery looks completely at home playing center so far, matching up with a Pro Bowler like Casey Hampton and living to tell about it.

Now look, I’ll openly admit to be terrified of the lack of depth on the offensive line. If any of these five guys is injured for a substantial amount of time, it could get ugly in a hurry.

But if these guys can continue to play at this level and the offensive line gets a little lucky when it comes to remaining relatively healthy, then the Redskins might actually be able to put together those much-needed time consuming drives at the end of a game to run out the clock.

They might be able to give Beck enough time to finally look downfield for a target more than five yards away. They might once again be able to give Hightower, Helu or whoever enough space to “drive a truck through,” as Hightower said after his 58-yarder.

And if we really want to get crazy, if they continue to improve, there might even come a day when the Redskins offense actually scores more than 20 points in a game.

Okay, let’s not get ahead of ourselves here. For now, let’s just cross our fingers and see if the Redskins offensive line can do well enough to keep Ravens players from openly mocking them during the actual game.