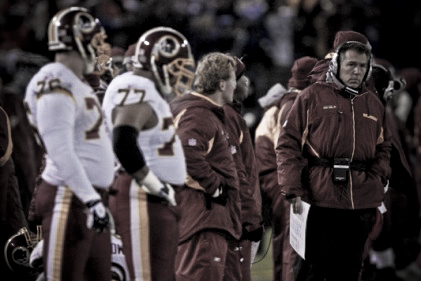 The ‘Skins second drive was more successful, if only because it didn’t end with a turnover. Instead the team went three and out and punted (which was a dandy 21-yarder by the pitiful Ryan Plackemeier).

The Redskins third drive? It ended after just one play – a fumble by running back Clinton Portis that ended with Reed scooping up the lose ball and taking it 22 yards for a touchdown that effectively ended the competitive portion of the evening. Five minutes into the game it was 14-0 and we wouldn’t have blamed anyone at home for throwing the remote control through the television set or, at a minimum, flipping the channel to something less depressing.

2. “Gone Til November” by Wyclef Jean

Cornerback DeAngelo Hall compared the team to Oscar De La Hoya, who suffered a humbling loss 24 hours earlier. Guard Randy Thomas talked about having his pride hurt. Tackle Chris Samuels wondered if his season was over after suffering a sprained bicep. There were no moral victories or room for sugar coating the situation after the Redskins loss to the Ravens, 24-10.

Any shot this team had at the playoffs ended Sunday night. Sure, the Redskins are still mathematically alive, but realistically this team – the same one that jumped out the gate with an impressive 6-2 start the first half of the season – is done, dropping to 7-6 after losing four out of their last five games.

3. “Everybody Hurts” by REM

Its common knowledge that every player on every team is banged up to some degree 12 games into the season, but this is past the point of absurdity. You simply can’t have this many important players either sidelined or hobbled by injuries and expect to remain competitive. The guys are professionals and are going to give it their all each and every week, but it’s almost like the ‘Skins start each game with no room for error.

It’s so bad that even the opposition feels obligated to weigh in. After blowing past offensive lineman Justin Geisinger, who was in the game after Samuels’ injury, Ravens defensive end Terrell Suggs crushed Campbell for a 12-yard loss and then turned to the Redskins sideline with some words for the coaching staff.

“I actually pointed at Jim Zorn and said, ‘You can’t do this, you’re going to get your quarterback hurt,’” Suggs told Jason la Canfora of the Washington Post after the game. “I was like, ‘I don’t think this guy is supposed to be here. You’ve got a mistake.’”

The worst part is Suggs is right. Nothing against Geisinger, but if he’s in the game, it’s not good for the burgundy and gold.

The offense is officially inept. This team has had trouble scoring points all season long, but at least they used to be able to drive up and down the field and rack up yardage. Now, staying on the field for more than a three and out is a choir. Take, for example, the sequence of events in the second quarter, when the team was backed in their own end and facing a third and one. Three penalties later (two false starts and a holding call) it’s suddenly third and 15 with the ‘Skins standing on their own five-yard line. And yet, Campbell completed a 27-yard pass to wide out Santana Moss to keep the drive alive. Apparently they didn’t have a one-yard play for that situation, so they backed up until they had room to run the 15-yard play. At this point it’s just maddening for ‘Skins fans.

The defense played well for much of the night but they couldn’t make the big stop when they needed to. The Ravens went for it on fourth down and easily converted, keeping the drive alive that gave them the 17-0 lead. And even after the ‘Skins battled back to make it 17-10 in the fourth quarter, the defense got humbled by a statement drive – a 12-play, seven-minute game clincher that ensured the Redskins went home empty handed once again. It’s great to see the defense finally getting turnovers, but when they needed to get the opposing team off the field – much like against the Dallas Cowboys a few weeks ago – they simply can’t seal the deal.

And don’t even get us started on the “special” teams. Shaun Suisham used to be a solid kicker, but now he’s a liability. He’s got more misses (nine in 31 attempts) than any other kicker in the league and no one can say with any confidence that he’s capable of making a field goal any time he steps on the field (as evident by his 71 percent accuracy on the season). But at least he’s better than punter Ryan Plackemeier. Seriously, this guy makes us long for rookie punter. Can someone tell the front office Derrick Frost is available? He wasn’t much, but he was better than this.

Here’s the thing – this team might not win another game this year. We’re not suggesting anyone has quit on head coach Jim Zorn, but it wouldn’t surprise us if between the injuries and everything else this team continues to spiral out of control the final three games of the season. Our advice? Stock the beer fridge. It’s going to be a long and unpleasant ride. Alcohol is great for numbing the pain and is cheaper than therapy.