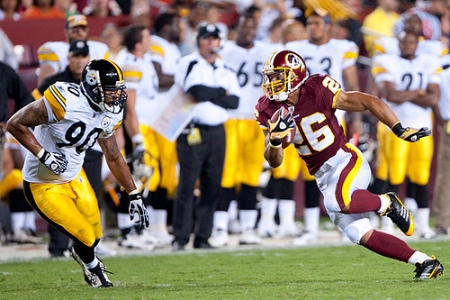 The more I think about it, the more I’m blown away by the radical overhaul head coach Mike Shanahan has given to the Washington Redskins.

Even though he’s only been in town for less than two full seasons, Shanahan has transformed the roster from one of the oldest in the NFL to a much younger, more competitive version.

Sure, there’s plenty of work left to be done – something even Shanahan would be quick to admit – but the Redskins are already in much better shape than when he arrived.

With established veterans such as Clinton Portis and Ladell Betts injured, these three unheralded backs did little to stake their claim to a starting job.*

*Ganther, Mason and Cartwright combined for 58 yards on 19 carries against San Diego’s back-ups in the 2009 season finale. The Chargers had already locked up a playoff spot and were content to mail in the game, and yet, these three could barely muster three yards a carry.

In Shanahan’s first season in Washington, the two-time Super Bowl winning coach was confident he could recreate the potent ground game that defined his 18 seasons in Denver.

Well, ‘Skins fans know what happened next. Johnson and Parker looked so bad, they both failed to make the 53-man roster and Portis, once again, finished the season on injured reserve.

(Editor’s note: Parker was cut before the season, but Johnson wasn’t. Clearly I overlooked his five carries for two yards in the regular season. My bad.)

Torain, who essentially won the starting job by default, looked good when healthy, and finished the season with 742 yards and four touchdowns.

Unfortunately for everyone involved, Torain was the only player in the backfield to put up any sort of numbers and the Redskins’ rushing game finished the season ranked 30th in the league.

That point can’t be over emphasized – a Mike Shanahan rushing attack finished 30th* in the NFL.

*Suck it, Seattle and Arizona.

Put it this way: in 24 seasons of coaching, Shanahan’s ground game has ranked in the top 10 a mind-numbing 17 times.

Before coming to Washington, Shanahan’s worst rushing attack came in 1986 – when a 34-year-old Shanahan was the offensive coordinator of a Broncos team featuring the one-two punch of Sammy Winder and Gerald Willhite.

And yet, even though you’ve never heard of either of those gentlemen, the Broncos still managed to rank 20th in the NFL in rushing yards that year.

So yeah, there was plenty of room for improvement heading into 2011.

This is where the story gets good for ‘Skins fans. Rather than repeating last year’s mistake and chasing name players with little left in the tank, Shanahan and friends targeted younger, hungrier players with something to prove.

Add in Torain and suddenly the Redskins have a stable of four backs all 25 or younger.

Let’s pause here for a minute because I seriously cannot get over the fact that the Redskins actually fleeced someone in a trade.

The Redskins never get the better end of a trade (multiple draft picks for Brandon Lloyd, anyone?), and yet, they acquired a potential starting running back in exchange for a 35-year-old defensive lineman who wasn’t going to make the team anyway and a 2012 sixth-round pick.

Well done, Cardinals. This is why no one takes you seriously. I bet the Arizona front office would love a mulligan on this deal already – especially considering their second-round pick, former Virginia Tech standout Ryan Williams, suffered a season-ending injury on his first carry of the preseason.

But enough about Arizona. This is all about Washington’s new-and-improved backfield.

Through two preseason games, the Redskins have racked up 354 rushing yards. Only San Francisco, with 375 rushing yards, has done better.

For all that he excelled at, Portis managed to rush for more than 50 yards in a single carry just once from 2005-2010. Hightower and Helu accomplished the feat in the same game.

Don’t let anyone tell you that Hightower’s 58-yarder and Helu’s 51-yarder came against a listless Colts team in a meaningless preseason game. Those two plays represent what the future just may hold in Washington.

They illustrate what Shanahan’s ground game looks like with everything clicking. They showcase just how much potential these running backs have.

Simply put – regardless of which running back gets the bulk of the carries, these four guys might be the most enjoyable aspect of the 2011 Redskins.

Hightower scored 23 touchdowns in his first three seasons. Torain is a guy who Shanahan openly compares to Terrell Davis. Helu had seven different runs of 50 yards or more his senior year at Nebraska. Royster left Penn State as the school’s all-time leading rusher.

Doesn’t that sound a lot better than trying to talk yourself into rooting for Tiki Barber or another injury-plagued season for Portis?

Yeah, I thought so.

Now, because I’m a lifelong Redskins fan, I’m conditioned to prepare myself for the worst-case scenario. So before I go overboard gushing about these four backs, I feel obligated to point out how this could all go wrong.

For starters, Torain is rarely healthy. The 25-year-old is currently out of action thanks to a fractured wrist, but there’s always something wrong with Torain.

The third-year pro has never played a full 16-game season and it’s difficult to imagine him getting healthier with the amount of wear and tear running backs face in this league.

Hightower might look great now, but he’s also a guy with nine fumbles over the last two seasons. With so many turnovers in his game, the combination of Hightower and quarterback Rex Grossman could be explosive for the Redskins … or the opposition.

Helu and Royster have both managed to shine in college and the preseason, but ‘Skins fans would be wise to manage their expectations with the rookies as they deal with the highs and the lows of their first season in the NFL.

That being said, I’m more inclined to believe these four are capable of putting together some nice numbers this season.

There might not be one breakout star in 2011, but it’s tough to think that these guys won’t be more productive than what Redskins fans have been forced to suffer through recently. And if that’s the case, then that’s one less position for Shanahan and friends to worry about moving forward.