getting to know jason arnott 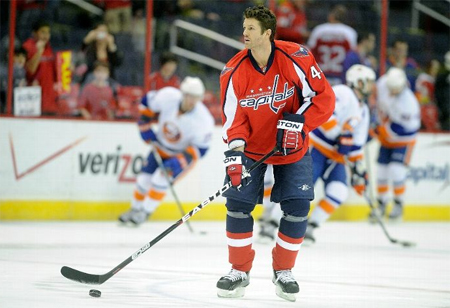 With more than 1,100 regular season games and more than 100 playoff games worth of experience under his belt, it’s safe to say that veteran center Jason Arnott brings something to the table that the Washington Capitals were previously lacking.

After 17 NHL seasons, Arnott can honestly say he’s seen it all. That’s vitally important because he can provide the kind of steadying presence a young and talented locker room needs if the Caps are ever going to make an extended postseason run.

Nothing against Dave Steckel, who was a solid and dependable player during his time in Washington, but getting Arnott for the fourth-line forward and a second round draft pick was an absolute bargain.

You want to know how to fairly and accurately judge a player acquisition like this? Listen to what your rivals have to say about it.

For example, just minutes after news broke that the Capitals had pulled the trigger at the last possible minute before the trade deadline, a long-time friend of mine sent the following note:

Every Cup the Pens won they picked up a guy like that in March: Ron Francis. Rick Tocchet. Billy Guerin. GMGM’s best trade deadline move ever.

That’s coming from a diehard Penguins fan. And yes, a Pittsburgh fan setting down his Terrible Towel long enough to learn how to type is impressive, but that’s beyond the point.

Arnott is a meat and potatoes forward who has no issue crashing the net. He’s a guy who can speak up when needed, but more importantly, he can show a finesse team like the Capitals that it’s okay to roll up your sleeves and get a little dirty.

That’s what it takes to win something at hockey’s highest level.

I had the chance to chat with Arnott the day after he made his Washington debut and I’m going to be completely honest – after just five minutes, I walked away thinking “I’d love to play hockey alongside a guy like that.”

His demeanor and his mentality on the ice and in the locker room really are what you want to see from a top-six forward. Keep reading and I have a feeling you’ll see what I mean.

Okay, you’re a 36-year-old who has been in the league a long, long time. That being said, you’re in a brand new locker room trying to soak in all these new faces and a completely different mindset. Does it feel like the first day of school?

“Yeah, actually, it does,” Arnott said. “That’s a good analogy. It’s obviously a little different and yesterday happened so fast. We got our physicals in the morning and then ‘boom,’ we’re on the ice for a pregame skate. And then ‘boom,’ we’re playing in the game with different guys. It’s an adjustment, but the guys here are fantastic. They opened up the room to us and made us feel right at home. That helps out a lot. It doesn’t take long for you to make friends, fit in and have fun.”

I remember talking with Jason Chimera when he first arrived in D.C. and the culture shock of coming from a defensive-minded system in Columbus to a much-more aggressive scheme here with the Caps. I’ve got to imagine that’s even more pronounced with you, coming from New Jersey. What’s going through your mind as you’re trying to take it all in?

“Oh yeah, it’s definitely an adjustment,” he said. “A lot of things [Devils coach] Jacques [Lemaire] did were fantastic. It’s a defensive style of game that waits for turnovers and little things like that. Here, it’s a little more open. There’s a lot more offense and a lot of offensive defensemen here. You can’t hold them back and not let them go on the offensive. You’ve got to let them create things when they want to. Every team is different and every team has to have a different system that works for them.”

You didn’t have to do this. You didn’t have to waive your no-trade clause and relocate to a brand-new city – especially with the Devils having been on such an amazing tear of late. What ultimately swayed you to let this deal happen?

“Well, for one, I didn’t think we were close enough to make the playoffs in New Jersey,” Arnott said. “We were nine points back and that’s tough with 20 games left. I just couldn’t gamble on it. You know, if I would have had another year left on my contract then I probably would have stayed and played it out. But I wanted to play in the playoffs this year and try to win another Cup. The Capitals seemed really interested and I really liked the make-up of their team. I thought they had a great shot at winning, so that helped me make the final decision. It was tough though. It was definitely hard.”

As someone who has been in the league a while, you’ve obviously played against the Capitals a time or two. As an outsider, how did you view this team?

“They’re a very talented team,” he said. “If these guys crack down on defensive play and take care of their own zone, there’s no stopping them. The offensive ability in this dressing room is crazy. I saw a lot of it last night [against the New York Islanders]. You’re always going to make mistakes and stuff, but if we crack down and limit the three-on-two’s and two-on-one’s, we’ll play even better. Guys need to come back in our zone hard and take care of that. If they do, there’s no stopping them.”

With goal scoring being down this season and the powerplay seemingly in a season-long slump, there’s an awful lot of handwringing around town. You don’t sound overly concerned though. Is that stuff correctable?

“Yeah, sometimes teams go through that,” Arnott said. “And there’s such an offensive whirlwind here that people are just wondering why they’re not scoring more and doing little things on the powerplay to be more successful. But that’s other teams adjusting to them as well. And honestly, sometimes the puck just doesn’t go in the net. Sometimes, it just doesn’t go in, but they’ve been winning hockey games and that’s the bottom line.”

As a veteran coming into a brand-new organization, how do you figure out exactly how involved to get – whether it’s stepping up on the ice or speaking up in the locker room?

“It’s hard because you don’t want to sit here and rant and rave – especially as the new guy,” he said. “So you have to pick your spots and speak up when you think things need to be corrected or when things need to be assessed and adjusted. It’s a fine line. I’m not a ranter or a raver as it is. I’m a pretty quiet guy in the room, but if I see something that needs to be addressed, I’ll say it. I’m not a young guy anymore and hopefully they’ll take what I have to say with a grain of salt.”

You’ve got 20 regular season games left. What do you hope to achieve between now and the start of the postseason?

“We’ve got to strive to get home ice and get as high in the standings as possible,” Arnott said. “We need to play well down the stretch because, going into the playoffs, you want to be playing at your highest level. It’s tough now-a-days to turn on a switch once you get into the playoffs. You never know what’s going to happen in the playoffs and there’s no real favorite, so we want to go into it playing at our best.”

Since his arrival, Arnott has repeatedly been compared to Sergei Fedorov – the veteran forward Caps general manager George McPhee acquired for a playoff run during the 2007-08 season.

If Arnott can have similar success down the stretch and into the playoffs, there’s little doubt that I won’t be the only Caps fan to develop a bit of a mancrush on him.