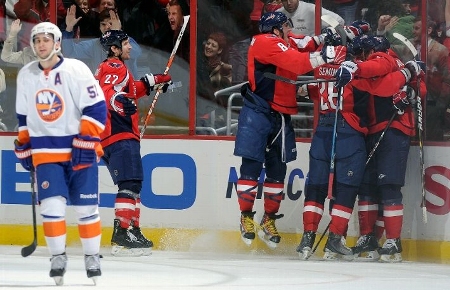 It seems like only yesterday I was comparing the Washington Capitals to the best show in the history of television. But that was yesterday.

Today, after watching the Capitals put on one of the most mystifying performances in recent sports history (*), I’m fully prepared with a brand-new analogy.

(*) Namely jumping out the gate with a fantastic seven-minute effort (been there before), only to fall asleep at the wheel for the next 52 minutes of playing time before scoring an improbable goal in the final minute of regulation and then stealing victory in the most dramatic way imaginable.

Watching the Caps is like being in a long-term relationship. How so, you ask? Let me explain.

Anyone who has been in a committed relationship for an extended amount of time knows that there are times when you simply can’t get enough of your significant other. And then there are other times when you want nothing more than to choke the nonsense out of them.

Of course, you don’t follow through and actually put your hands on them (kind of like Alexander Semin “contemplating” going after a loose puck in the corners or crashing the net), but that’s not the point.

The point is, being in a long-term relationship takes a ton of work and you learn to accept the good with the bad. It’s never easy, but you make it work.

And watching the Capitals somehow outlast the New York Islanders 2-1 in overtime on a night when damn near everyone other than goalie Michal Neuvirth looked as if they were playing hockey while utterly stoned … well … the entire ordeal enabled me to experience the full range of emotions. Just like a relationship.

From the very first shift, the newly acquired trio of center Jason Arnott, defenseman Dennis Wideman and left wing Marco Sturm looked to be exactly what the doctor ordered for a Capitals franchise in need of a kick in the pants.

Arnott’s passes were a thing of beauty — even if his teammates couldn’t do anything with them. Wideman bailed out  defenseman John Erskine on an odd-man rush after the “Dumb and Dumber” stand-in turned over the puck. And Sturm almost had a goal on his very first shift in Washington — nearly stuffing home the puck on a beautiful breakaway chance.

After just seven minutes, the Caps already had nine shots on net and there was a sense that if just one Washington player could find the back of the net, the game could quickly turn into a blowout. But alas, it’s never that simple when dealing with this franchise (or women, for that matter).

The bipolar Capitals failed to solve Islanders goalie Nathan Lawson (*) and then spent the next 52 minutes playing some of the most uninspired hockey fans have ever paid to see.

Sure, for the game the Caps outshot New York 42 to 29, but once again Washington forwards were content to fire long-range/low-percentage shots from the blueline that even a mediocre no name goalie had no problem stopping.

This is the part where your wife/girlfriend/imaginary friend does something inexplicable stupid, even though she knows better, just to ensure get to spend at least an hour or so banging your head on a desk. Good times.

And then, just when you’ve had enough and you’re ready to hit the road, she … I mean … the Caps do something at the very last minute that sucks you back in.

In this case it was kill off two boneheaded penalties by center Nicklas Backstrom and then scoring the game-tying goal with 48 seconds left in regulation. After happily settling for hockey’s equivalent of a three-point shot for much of the evening, a Capitals forward finally remembered it was still legal to crash the net. Forward Brooks Laich went to the net, Arnott passed him the puck and the Caps finally on the board.

The goal came out of nowhere. So much so that the Islanders, who dictated play for much of the evening, were suddenly reeling. And before they could recover, captain Alex Ovechkin came to the rescue — scoring the game-winning tally on a coast-to-coast play that is what dreams are made of.

Of course, the fact that the Capitals played solid hockey for roughly 10 minutes the entire game should be troublesome. It should be enough to keep coach Bruce Boudreau awake at nights trying to figure out why it happens so frequently and how the hell he can put a stop to it.

But for at least one night, folks are just happy to see the home team sneak away with two more points in the standings.

Sure, the marriage seemed on the rock for much of the evening and you swore you wouldn’t let this happen to you again, but in the end, you just can’t call it quits. This relationship is terrible for your sanity, but you’re not going anywhere.

Even on her worst night, you’re still with one of the hottest chicks out there and who are you kidding — you’re not about to let her get away.