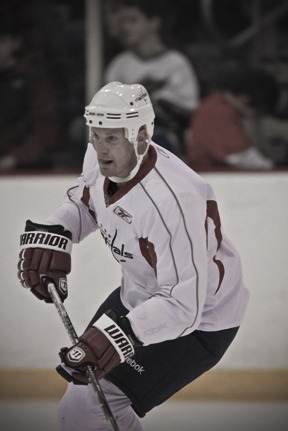 Let’s be honest, not much was known about Jason Chimera prior to his arrival in town.

Before this season, casual fans had little reason to know of him and really, the only reason his name might sound familiar this year is because of a dust up he had with Alex Ovechkin when the Columbus Blue Jackets came to town back in November.

Who could have guessed that a few short months later Capitals general manager George McPhee would trade for the 30-year-old forward in a deal that sent former captain Chris Clark and defenseman Milan Jurcina to Columbus?

We tracked down the newest member of the Capitals to find out first hand how D.C. has been treating him.

Okay, so how’s the transition going as you adjust to playing in a new city for a new team?

“It’s been good so far,” Chimera said. “It’s one of those things that takes a while to get everyone shipped over and settled in. It’s going to take some time to get used to it, but I think it’s coming along. I’m starting to feel better on the ice, and that helps a bit too when you’re contributing. It’s a hard move, when you’re coming in mid-season and you don’t know any of the guys and you’re learning a new system, but fortunately it’s coming along faster than I thought.”

What’s your early impression of your new locker room?

“Hockey players in general are good guys,” he said. “It’s easy to get along with most of them. Sure, you might get along with some guys more than others, but in general hockey guys are pretty open and honest. They welcomed me right away here, so that’s been good.”

We’d be hard pressed to find two offenses more different than Bruce Boudreau’s philosophy and that of Ken Hitchcock. How tough has it been to transition from one end of the hockey spectrum to the other?

“It’s different, that’s for sure,” Chimera said. “The first couple games I was thinking more than I should have when I should have just been playing. It’s one of those things that once you get used to the new style of play you can just go out there and play now. But those first four or five games I was like a little kid or Bambi out there. I didn’t know where to go or what I should be doing, but it’s coming along and I’m feeling better.

“We’ve also stuck with the same lines for a couple games now and that’s helped too,” he said. “Having the same guys out there so you get used them a little bit helps too.”

Our advice? Don’t get used to it. Boudreau loves to switch lines around whenever the mood strikes him.

“Yeah, I’ve already heard that,” Chimera said. “But it is nice when you keep a line together for a little while and it shows you’re playing well and things are going good. So far he’s keeping us together, so that’s a good thing.”

You’re a tough dude to figure out. You’ve got speed enough to keep up with the finesse players in the league, but you’re also not afraid to be physical and work in the corners. How would you describe your game to those who might not be familiar with you?

“I think I just use my speed to create opportunities,” he said. “I get in there on the forecheck quite a bit and try to finish my checks. I think I can score goals in this league pretty good too. It’s just one of those things – I can use my speed and go wide to get to the net or I can use my size to go up the middle. I’ve always liked the physical part of the game and I think it gets me in the game a lot more when I go out there and start hitting people. It’s fun when you play that style, and those types of games are my favorites.”

You’ve barely settled in here, so we’re not foolish enough to ask you to make long-term plans, but is this a situation you could envision being a part of for a while?

“Yeah, no one wants to move around all the time,” Chimera said. “When this summer comes around I don’t want to be traded again or anything like that. I want to be here for good and hopefully end my career here. I plan to stay here until they try to kick me out. Hopefully this is just the start of a long relationship.

“I’m a proud guy when it comes to who I play for and I always respect the sweater I play for,” said Chimera. “With such a history, this is a sweater you want to play for. You see the home crowds and you just want to be here. This is one of those hockey markets where the team is going to be good for a long time because we’ve got so many good, young players. It’s just exciting to be a part of and I hope to be here for a long, long time.”

Everyone knows about the big names like Ovechkin, Backstrom, Semin and Green. We’re interested to hear your take on some of the other guys on this roster who stood out to you when you played against the Capitals?

“All these guys can skate and most of these guys have the size too,” Chimera said. “I came in here at 6-2 and I feel like a shrimp. It’s just a big team with a lot of skill that’s a lot of fun to play with.”

In the 16 games since his arrival, Chimera has three goals and six assists for nine points while averaging roughly 12 minutes of ice time a night.

For comparision’s sake, Chimera had eight goals and nine assists for 17 points while averaging just under 15 minutes a game in 39 games for Columbus this year. It should also be noted that Chimera had a plus/minus of -7 with the Blue Jackets, and is currently a plus four for the Caps.

And, oh by the way, the Capitals have gone 13-3 since his arrival, while the Blue Jackets have gone just 7-10 without him. We’re not saying that Chimera is the reason the Caps are riding a 10-game winning streak or why Columbus is under .500, we’re simple presenting the numbers and letting you do with it what you may.

As Chimera said, he’s beginning to develop a comfort skating on the third line with center Brendan Morrison and winger Eric Fehr. None of the three would qualify as flashy, but clearly Boudreau is happy with them. Otherwise he’d have changed his lines half a dozen times by now.

Folks might not have thought it was possible after the lockout and during the rebuilding years when crowds were sparse at best, but Washington is now one of the premiere destinations in the NHL. Chimera knows the hockey gods have smiled upon him allowing him to leave Hitchcock’s snoozefest for Boudreau’s run-and-gun style of play.

And best of all, Chimera is on the books until after the 2011-12 season. So he’s not going anywhere unless management has a change of heart and moves him. It’s clear he feels fortunate to have landed here and is more than happy to do whatever he can to help the Capitals continue their winning ways.

He’s not a marquee player like Dion Phaneuf, but chances are Chimera will be a regular contributor on a legitimate Stanley Cup contender this year. What more could he or Caps fans ask for?