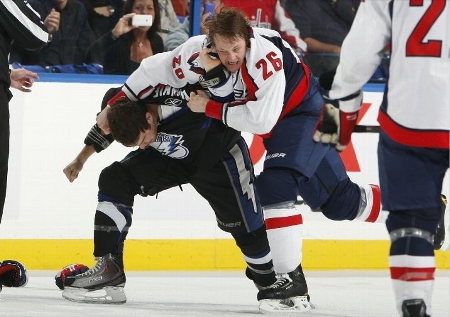 When the Washington Redskins make headlines away from the game these days, it involves road rage, inappropriate fondling and late-night knife fights that result in trips to the emergency room.

Thankfully, that’s not the case with the Washington Capitals.

The Caps are in the news today and it’s for good reason – as the team announced that forward Matt Hendricks signed a two-year extension worth a reported $1.6 million.

While his offensive numbers aren’t all that eye catching (seven goals and 12 assists for 19 points in 57 games this season), Hendricks has managed to stand out for other reasons.

Like the immortal Ron Burgundy with “Jack Johnson” and “Tom O’Leary,” Hendricks has made a name for himself thanks to his willingness to drop the gloves. He’s got 12 fights under his belt already this season and he’s even sought advice from teammate D.J. King on how to be a better fighter. You know … just in case.

While it’s always enjoyable to see someone step up and defend a friend or teammate, it still nothing short of amazing to see how D.C. has completely embraced such a devoted blue-collar worker.

Respecting someone’s hard work is one thing, but on a team loaded with elite players such as Alex Ovechkin, Nicklas Backstrom and Mike Green, how has Hendricks risen to the title of “fan favorite” seemingly overnight?

(Laughs). “I don’t really know,” Hendricks said. “I guess I just work hard and maybe people haven’t always seen that in sports. But you’re right – they’re definitely embracing me and it feels good.

“I’ve noticed a change,” he continued. “I’ve gotten a lot more face-to-face time with fans through appearances and things like that, and it’s been really nice to feel so at home here in Washington. It’s always nice to meet Caps fans and to play at the Verizon Center, where you’ve got 20,000 fans or whatever behind you.”

This isn’t Hendrick’s first NHL stop. He was drafted by Nashville back in 2000 and spent two seasons in Colorado before coming to Washington on essentially a tryout basis without any kind of contract during the Capitals’ training camp.

The 29-year-old played well enough to earn a one-year deal with the Caps though and has rapidly risen from obscurity thanks in large part to hockey’s first-ever reality show. But we’ll get to that in a little bit.

I was curious to know if Hendricks had been so warmly received in his other stops along the way during his career.

Eric Fehr once said that he could come to Kettler with his family and participate in a public skating session without really being recognized. While Hendricks was most definitely able to relate when he first arrived to town, those days appear to be numbered.

“It’s getting harder,” Hendricks admitted. “HBO definitely had a lot to do with it. They did a great job of showing what we’re all about as hockey players and really portrayed the organization in a great way. I think that’s been a highlight for me, being a part of that entire experience.”

When HBO announced plans to do a four-episode show spotlighting the Winter Classic, local fans were excited to see which players would become breakout stars after the series was over.

Well, coach Bruce Boudreau’s language aside, here we are months later and there are still countless Caps fans who can close their eyes right this very moment and picture Hendricks’ ridiculously gruesome black eye made famous by HBO’s “24/7 Capitals/Penguins: Road to the Winter Classic” show.

“I definitely think that had something to do with it,” he said with a smile. “That blue-collar mentality or whatever you want to call it is part of my job. And I’m willing to do whatever it takes to help this team win games.”

Anyone doubting the sincerity of Hendricks needs to look no further than his childhood favorite NHL player – Dino Ciccarelli, who made a name for himself for nearly two decades thanks to heaping helpings of heart, determination and a healthy dose of scrappiness.

The Caps honored Ciccarelli’s Hall of Fame career earlier this season and Hendricks took the opportunity to let the 19-year veteran know how much of an impact he had.

“I talked to him and let him know he was my favorite,” he said. “I told him I’m from Minnesota, where he played for a long time, so he was happy to hear that. He was a very nice and a very kind guy. I was really happy to be a part of his ceremony.”

That’s not something you see every day – a professional athlete turning into a fanboy. Hendricks, who leads the Capitals with 84 penalty minutes this season, wasn’t too worried about letting his guard down though.

“I’m sure he hears that stuff all the time,” Hendricks said of Ciccarelli. “He was a great player and he did great things for the game and for smaller players. He’s not the biggest guy, but he’s got the biggest heart.”

In Ciccarelli’s second NHL season, he racked up 55 goals and 106 points. If Hendricks models his game after Dino, then it’s fair to expect similar production out of him in the near future, right?

“Oh jeesh … I don’t know about that,” he said with a laugh. “I gotta keep working on my game if I’m gonna get there. He just didn’t care and he was so tenacious. I’ve got to work on trying to get his scoring touch, I guess.”

And that’s what makes Hendricks so easy to root for. Even as he’s carving out a nice little role for himself in Washington, he’s still a guy who has no problem kicking himself when the moment calls for it.

If Hendricks has an ego, he does a masterful job of hiding it. Spend just five minutes around the guy and you’re convinced he’s absolutely the kind of guy who’d be more than happy to sit down on the barstool next to you and throw back a few cold ones.

If you’re a Caps fan looking to purchase a jersey of someone other than Ovechkin, Backstrom and Green, then why wouldn’t you at least consider Hendricks? He’s always had his teammates’ backs, so it’s about time someone returned the favor.