capitals fail to turn back the clock 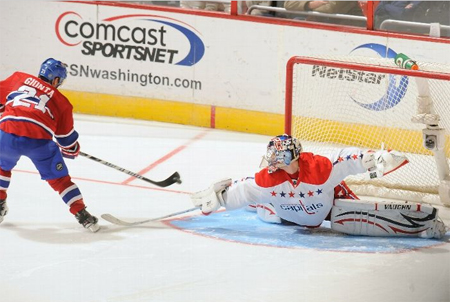 While it was a great idea to dedicate a night in honor of Hall of Famer Dino Ciccarelli, the pregame festivities were fairly pointless.

Talking with fans beforehand, the overwhelming opinion was folks hoping for a heartfelt pregame ceremony with video tributes for the former Capital, but everything before the puck was dropped seemed rushed and clunky.

Why even have him out on the ice if he’s only going to be a part of a 10-second dog-and-pony show? The video tributes throughout the game were much better, but by that point Ciccarelli was tucked away in the owner’s suit or some other luxury box and the fans were robbed of seeing his reaction to the kind words shared by his friends and former teammates.

The way it was handled this time around, fans were robbed of the opportunity to share a heartfelt moment with a former great. Here’s hoping next time the Caps start the festivities a little earlier to give Caps fans more than a few seconds with one of their favorite former players.

Speaking of brief moments of joy followed by disappointment – how you liking that Capitals offense these days?

They get off to their best start in more than a month, only to fall asleep at the wheel for the final two periods. By the time regulation ended, there couldn’t have been a single Caps fan, player or coach in the Verizon Center who had a good feeling about how the story would end on this night.

Of course, true to form this season, the Capitals fell apart in a game that required overtime and lost to the Canadiens 3-2 via shootout.

The Caps might have referred to last night as “Turn Back the Clock Night,” but the results were very much more of the same uninspired hockey that’s been the calling card of Bruce Boudreau’s guys far too frequently this season.

Earlier this week, I made my argument that the Capitals are a team suffering from an identity crisis. And my stance on the new-look Caps paved the way to a healthy debate (and a disturbing visual of farm animals wearing lipstick).

Since this topic continues to engulf the Capitals these days and the opposing team last night happened to be the same squad that started all of this drama in the first place, I wanted to dig a little deeper into the subject.

Revisionist history now suggests that Washington was bounced by the Canadiens in the first round of the playoffs last year because their run-and-gun style of play can’t work in the postseason.

In the days after the Caps season came to an unexpected screeching halt, armchair quarterbacks using the benefit of hindsight happily piled on by claiming the Caps were doomed until they conform to conventional thinking and tighten up on the defensive side of the rink.

Hockey purists are convinced an all-out aggressive mentality cannot bring home the Stanley Cup, so the Capitals might as well pretend to be something they’re not, right?

But here’s the thing – at least in this case, those critics are using flawed logic. The Capitals didn’t get eliminated in the opening round of the playoffs last year because of the defense. They lost because of the following:

How any of that translates to the team needing a defensive makeover make-over is beyond me. People forget this, but the Capitals actually outscored Montreal 22 to 20 in that first-round series.

The Caps got off to a better start than Montreal, but the Canadiens did a better job of making adjustments as the series went on. But once again, that shouldn’t be an indictment on the defense.

Last year, the Caps averaged 3.8 goals for per game and 2.8 goals against during the regular season.

Once they got to the postseason though, the Caps averaged 3.1 goals for per game and 2.8 goals against versus Montreal.

The defense remained the same. But the offense stalled and the NHL’s best regular season team was eliminated in humbling fashion.

So, to recap, the offense went cold and the answer suddenly became “we need to become more defensive minded.”

There’s just one problem – that’s doesn’t actually confront the issue at hand. It just changes the conversation while ignoring the elephant in the room.

Let me put it another way – it’s roughly akin to if my wife and I were having marital problems, I tried to solve the problems by finding a new best friend. Sure, Mama McFanboy and I are still on the rocks (in this hypothetical scenario), but at least I’ve got a new drinking buddy in my life.

You’re not fixing the actual problem. You’re simply turning your attention to something else.

This season – thanks to injuries, slumping forwards and a new defensive mindset – the Caps are now averaging 2.7 goals for per game and 2.4 goals against.

Maybe now narrow-minded hockey purists can now convince themselves that Washington has a better chance at postseason success because “they’re playing hockey the right way,” but I’m not buying it.

The Capitals’ offense still has no flow or consistency. There are still too many players coasting out there, either unwilling or unable to do the dirty work necessary to score goals in tightly-contested games. And there are still too many players who settle for long-range shots rather than crashing the net, so the opposing goalie only has to make one save and the puck is going in the other direction.

And that’s before I mention players taking mind-numbing penalties (see: Laich, Brooks) or being overly cute with the puck (see: Carlson, John). So yeah, there’s plenty to be concerned about these days. Which means, unless the defense improves to historical levels, all of these little issues are going to kill any realistic hopes of meeting this team’s goals and expectations.

So if I seem a little crankier than usual these days, please forgive me. I’ve just come to grips with the fact that the only team in town worth the price of admission no longer plays to its strengths and is now on pace to die a mediocre death come playoff time. And that’s a tough pill to swallow.