caps suffering from an identity crisis 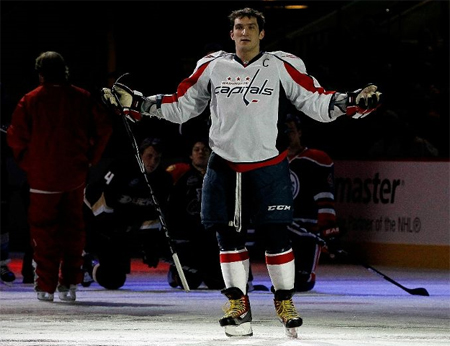 Now that the all-star festivities have come and gone, it’s time to turn our attention to the second half of the NHL season.

More specifically, it’s “go time” for the Washington Capitals – who continue to frustrate their fanbase despite the fact that they’re on pace to finish the regular season with more than 100 points and are a lock to qualify for the playoffs for the fourth-consecutive season.

While there is plenty to be content with when it comes to hockey in our nation’s capital, the truth is the Capitals are a flawed team currently suffering from an identity crisis. And unless the players, coaches and talent evaluators can resolve the situation sooner rather than later, I fear another disappointing finish is on the horizon.

The Capitals currently stand in fifth place in the Eastern Conference with a record of 27-15-9. Now, that sounds fairly impressive until you remember that the last two categories are both the same thing – games Washington lost.

So while the team gets a point in the standings for overtime and shootout losses, the Caps are actually 27-24 this year. Doesn’t sound nearly as imposing, does it?

It took me a little while to figure this Caps team out, but I think I’ve finally gotten there. Pretty much since the day Bruce Boudreau took over the coaching duties in Washington, the Capitals have had one of the most dynamic offenses in hockey.

The defense had good days and bad days, but the high-powered, run-and-gun offense was always good enough to carry the load and keep the Caps in games. Now though, the offense isn’t nearly as imposing and that scares the hell out of everyone involved.

The team’s identity crisis comes into play because goals are no longer automatic, so by necessity, the Caps have become more defensive minded. Instead of trying to return to form and outscore opponents, it’s as if Boudreau and friends are trying to be something they’re not.

They’ve given up. They’ve resigned themselves that the good old days of “fire wagon hockey” have come and gone and now they need to try and morph into the 90’s New Jersey Devils or something.

But that’s not who this team is. That’s not what these players with this specific set of skills are best equipped to do. So what you’re seeing now is guys trying to be something they’re not. Instead of letting the game come to them and reacting naturally, they’re over-thinking things and second guessing themselves.

Far too often now, games are clunky and entire periods of play are unwatchable. Even at their worst – when Caps skill players looked as if they were figure skating out there and being too cutesy with the puck – at least they were putting on a show.

Now the Capitals are no different from the stale brand of hockey on display in Nashville, Florida or Phoenix. They’re hoping to limit their mistakes and lull the opposition into giving them one or two quality scoring chances a period.

And that’s unacceptable. A team with skill players such as Alex Ovechkin, Nicklas Backstrom, Alexander Semin and Mike Green isn’t built to play a defensive trap or left-wing lock. It’s meant to be the Phoenix Suns.

They need someone to step up and say, “We’re not going to let off the gas until the final whistle blows because we know there isn’t another team out there who can trade scores with us.”

Let Steve Nash run the show and the first team to 100 wins. Some nights the offense might be off, but more times than not the sheer talent and the aggressive mindset will carry the home team to victory.

And honestly, the Suns aren’t even the best comparison out there. The most obvious match is the Indianapolis Colts.

Since 1998, Indianapolis has lived and died with an offensive mentality, but you know what? They’re always relevant. Manning might only have one Super Bowl ring to his name, but they’ve made the playoffs 11 times and are always considered among the league’s elite.

Three head coaches – Jim Mora, Tony Dungy and Jim Caldwell – have called the shots during Manning’s career, but each of them realized there’s only one way to be successful with those players on that roster. So instead of fighting it, they each embraced it.

It’s why a recent NHL player’s poll listed the Capitals as the league’s most overrated team. They became relevant by outgunning their opponents into submission. But now, they’re content to try and bland teams to death. No one fears this Caps team anymore. If nothing else, it’s time to regain their swagger and show the rest of the NHL that this offense is back in business.

Let me put it another way – would you rather be great at one thing or pretty good in a few different areas? Nobody remembers the mediocre kid who skates through life getting C’s on everything. No, people only remember those who set themselves apart from the pack.

So stop fighting it. Stop pretending you’re something you’re not. Embrace that these players are best suited to run and gun and get back to when hockey was fun for those playing it and those watching it. That philosophy got you this far, so stick with it.

Are Caps fans spoiled? Has the bar been raised to unreasonable heights? Shouldn’t we just be happy one team in this town is capable of putting on a show worth the price of admission? Absolutely. I don’t think I can really argue against any of these points.

But one could argue that these days the Caps aren’t putting on a show worth the price of admission. They’re routinely getting shut out by mediocre teams with mediocre goalies. They’re going through the motions hoping to stretch the fight out a full 12 rounds so they can win by decision, but they’re not even good at that (as evident by the nine losses in the last 10 games that have required overtime).

Nothing against Matt Hendricks, who is a quality grinder who absolutely deserves to be a third-line player on an above-average team, but when he’s providing your scoring punch something is wrong.

Consider this my plea to Boudreau and friends that once the Caps take the ice Tuesday night, they revert back to the style of play that made them nationally relevant. The first half of this season was an interesting, little experiment, but it’s time to embrace who you are – warts and all.

Your fans know it. Your peers know it. Now it’s time for the Capitals to accept it.