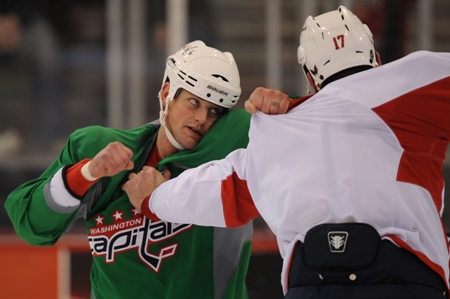 Thanks to HBO’s amazing “24/7 Capitals/Penguins: Road to the Winter Classic” show, fans were not only treated to an unfiltered peak at one of the best rivalries in all of sports, but Caps fans also got a rare glimpse behind the scenes of their favorite players.

Whether it was Capitals captain Alex Ovechkin suggesting an opponent had “sensitive skin” or coach Bruce Boudreau sharing a few choices words with his players during a timeout, local fans were suddenly afforded a level of access that most sports fans never dreamed possible.

Now that the show is over, it’s tough to go back to the way things were. Even when the Capitals are doing well on the ice, you find yourself saying things like, “I wish HBO cameras were still in the building so we could hear what’s being said in the locker room after that play.”

Alas, that shipped has sailed and those award-winning cameras ain’t walking through those doors.

Well, I can’t help but think the Capitals players, whether subconsciously or not, feel our pain and are trying to do something about it. That’s the only reasonable explanation for what transpired at the end of practice Monday morning, when forwards Matt Hendricks and D.J. King allowed Caps fans one more peak behind the curtain.

During a break in the action right before the end of practice, Hendricks and King met up at center ice and dropped the gloves. Now, it’s not terribly uncommon for things to get heated between teammates and for those moments to occasionally result in a few punches thrown.

But this was different. Hendricks and King weren’t pretending to be Gilbert Arenas and Javaris Crittenton. Or Etan Thomas and Brendan Haywood. Or Jon Jansen and Kedric Golston.

They were completely calm and engaged in a healthy dialog because, as it turned out, Hendricks was asking King for advice on the art of hockey fighting.

What happened next was amazing – King grabbed Hendricks as if the two were about to throw down, and then gave him some pointers while the two occasionally traded would-be punches.

They weren’t actually trying to land haymakers on each other, but King would begin to throw a slow-motion punch and then explain to Hendricks what to do if the actual situation was real.

Caps fans might not have HBO around anymore, but they got a first-hand look into a real-life Fight Club – and it was pretty damned cool, if I do say so myself.

Even though I’ve spent most of my life playing and watching hockey, I had never seen anything like this before. So I asked defenseman John Erskine, no stranger to fisticuffs himself, if the Hendricks-King fighter’s summit was commonplace in the NHL.

“That’s the first time I’ve seen that,” Erskine said. “But sometimes guys get together and trade secrets, I guess.”

If Hendricks asked you for advice, what would you tell him?

“My strategy is top secret. I don’t let that out,” he said with a laugh. “No, fighting definitely involves strategy and stuff. Sometimes it helps to get out there and do a little sparring.”

At that point, King entered the locker room. And now seems like a good time to point out that Erskine refers to King as the “undisputed champion” of the Capitals. If ever I was going to get to the bottom of this, he seemed like the best person to talk to.

“Oh, we were just grappling,” he said. “When he gets caught with the guy holding his arm over his head, he just kind of wanted to know what to do. So we were just sharing ideas out there, but when it comes down to it, you fight your own fight. I just told him you don’t get impatient and open yourself up. Always fight your fight.”

Is this normal though? Is this something you guys do on a regular basis?

“It all depends,” he said. “We look at the other line-up, see the way other people fight and then, get used to their style.”

In related news, the Philadelphia Flyers are your next opponent. You think you guys might get a chance to use some of this stuff?

And what does King think of Hendricks the fighter?

“He’s a battler who will take on anyone,” he said. “Obviously he’s giving up a few inches and a couple pounds, that’s for sure, but he’s a competitor.”

Hendricks made a name for himself on HBO with one of the nastiest black eyes humanly possible. Was the purpose of today’s meeting to help him prevent a repeat of that?

“It’s going to happen,” King said. “You never know. You’re going to get hit eventually, especially a guy like Hendy because he’s been in a lot of tilts this year. You’re going to take your share of hits, that’s for sure. You just try and limit them, and that’s what we were doing out there.”

Finally, Hendricks made his way into the locker room and all eyes were on him as media types hoped to hear first-hand, about the 29-year-old’s sparring session.

“Just getting a few pointers from Kinger there,” he said, downplaying the mock boxing match. “There’s not a better guy to get it from. He’s been in a lot of battles throughout his career. I like to listen to what he has to say, once in a while.”

What was he talking to you about?

“Technique and stuff, so I don’t get popped in the face as many times,” Hendricks said. “I’ve taken some bumps and bruises. But it’s all part of the game and I’m sure it’s not the last time it’s going to happen.”

If King is the undisputed heavyweight, then what does that make you?

“A middleweight,” he said. “Just somebody who doesn’t fight those guys.”

When you drop the gloves, are you trying to get your shots in quickly and be done with it? Would you rather it go on a while and outlast someone? What’s your gameplan?

“It depends on who you’re going against,” Hendricks said. “All in all, you’re just doing it for the team. It’s situational, but you’re trying to light a spark or defend a teammate.”

At this point, I’ll remind you that Capitals take on the Flyers in Philadelphia Tuesday night. The two teams have combined for 50 fights (27 for Washington and 23 for Philly), so it’s not a stretch to think that opportunity may present itself for either Hendricks or King to drop the gloves.

So how eager is Hendricks to use his newfound tips in live action?

Oh, I almost forgot. The first rule of Fight Club …