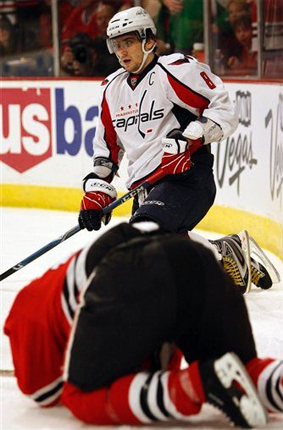 If you’ve been paying attention over the last few seasons, then you honestly weren’t surprised at the final results when the Washington Capitals rallied back to beat the Chicago Blackhawks 4-3 in overtime Sunday.

At this point, the Capitals, who boast the league’s best record, have developed a few tendancies that regular fans are fully aware of.

For starters, they hate early start times. Guys like Alex Ovechkin and Mike Green confessed a while ago that they value their sleep and hate matinee matchups because it throws off their routine.

Next up, there’s the fact that this team is rarely out of a game. Even when they were down 3-0 to Chicago, a legitimate Stanley Cup contender in their own right, you knew that once the Caps woke up they could flip a switch and make things interesting.

Sure enough, forward Alexander Semin drew a double-minor penalty for high sticking early in the third period and forward Brooks Laich struck first for Washington. Then, the Caps failed to score on a full two-minute five-on-three advantage and you’re thinking, “They blew it …” until center Nicklas Backstrom scored three seconds later.

Just 13 seconds after that, forward Eric Fehr beat Blackhawks goalie Antti Niemi and suddenly it’s 3-3. This Capitals squad leads the league in scoring by a crazy margin, but three goals in two minutes and 16 seconds is impressive, even for them.

By the end of regulation, the Capitals had come to life. They completely outhustled, outworked and outshot Chicago in the third period and the Blackhawks were lucky to get out of regulation with a point, which is funny when you remember they were up 3-0 heading into the final period.

But this was the third time this season the Capitals rallied back from a three-goal deficit to win a game, and the last time they did so was against the Pittsburgh Penguins (the 5-4 thriller in overtime) the last time they played a Sunday matinee game, which only reinforces that whole “We don’t like waking up early” thing.

Also, the Capitals are known for playing to the level of their opponent. They’re far less likely to get blown out by an elite team like Chicago than they are to suffer a humbling defeat to Tampa Bay or someone else further down the standings. When they’re playing in a “game of the week” against a truly talented team like the Blackhawks, it’s safe to assume they’re going to put on a show.

Sure, they sucked for the first two periods, but this Capitals team is loaded with talent and is able, from time to time, to get by without a full 60-minute effort. It might give coach Bruce Boudreau ulcers, but it’s definitely more exciting than watching the Wizards or Redskins self destruct.

Sadly, the final aspect of the Blackhawks game that is also familiar to Caps fans is controversy surrounding the physical aspect of Ovechkin’s play. As you know by now, Ovechkin was ejected from the game in the first period for boarding Chicago defenseman Brian Campbell.

Regardless of whether you feel Ovechkin hit Campbell from the side or from behind, there’s one thing all Caps fans should agree on – you hate to see the best player in the NHL put himself in this position. As soon as Campbell hit the boards, you knew it was ugly. The impact when Campbell slammed into the boards was vicious. The Chicago defenseman was in obvious pain while he was down on the ice for a while and even Ovechkin looked affected by the play – lingering behind the goal watching to see just how serious the situation was.

Now, rumors suggest Campbell is done for the season with a broken rib, broken collarbone and a second-degree concussion. Some will suggest Ovechkin has a history of cheap shots or that he has a reputation for this. We’ll gladly stay away from that debate. What we will say is that Ovechkin is vital to this team’s long-term success and we’d be much happier if he managed to keep himself out of controversial situations such as this.

After the Campbell hit, Ovechkin received a five-minute penalty for boarding and a game misconduct penalty (which is hockey speak for “He got kicked out of the game.”) This is the third game misconduct of the season for Ovechkin, and his second for boarding, which means he could be in line for a one-game suspension.

(We say “could” simply because there’s no real way to read the NHL when it comes down to suspensions. New York Rangers forward/pest Sean Avery got a six-game punishment for saying a fellow hockey player was dating his “sloppy seconds,” while Pittsburgh Penguins forward Matt Cooke got nothing for a headshot to an unsuspecting opponent. There’s no rhyme, reason or logic involved with these people.)

So now we’re left waiting to see what, if any, punishment will be handed down to Ovechkin. And that’s the problem. Look, we don’t want Ovechkin to change the way he plays. Honestly, it’s refreshing to see a superstar who isn’t afraid of contact. We would just like to see him use better judgment and avoid this kind of controversy.

The Capitals have shown they can win without Ovechkin in the lineup, but honestly, why handicap yourself if you can avoid it? He’s the best player on the NHL’s best team. All of the regular season accomplishments are great, but we all agree this team is capable of so much more.

Whether or not they reach their bigger goals will fall largely on the shoulders of the Caps’ captain. All we ask is that he’s in the lineup and on the ice as the Capitals continue this memorable season. If that means letting up every once and a while, then so be it.

(Update: Puck Daddy has an exclusive photo of the Ovechkin suspension hearing.)