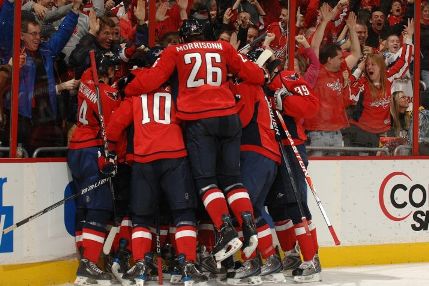 It always feels like a special occasion when the Pittsburgh Penguins and the Washington Capitals do battle.

You’ve got last year’s Stanley Cup winner taking on the top team in the NHL this season. You’ve got Sidney Crosby versus Alex Ovechkin. You’ve got two franchises (and two fanbases) with an intense history between them. Simply put – it’s hard to imagine a regular season game more fitting for Super Bowl Sunday than the Penguins and Capitals squaring off.

And yet, this one somehow managed to rise to another level. Because of a nasty snow storm dubbed “Snovechkin,” the D.C. area was crushed with over two feet of snow in the days leading up to this epic encounter.

The Penguins had to bus in from New Jersey and didn’t arrive until 2:30 the night before. And a quarter of the Verizon Center was empty when the game started simply because most of the area was still buried under snow.

“I think that was a pretty intense game,” Crosby said. “It felt like a playoff atmosphere to me. It’s intense every time we play them.”

For the eighth time in the last 14 games, the Capitals allowed their opponent to strike first. In fact, the Penguins were up 2-0 after the first period thanks to a pair of goals by Crosby. Capitals coach Bruce Boudreau was interviewed during the intermission and basically said the Caps were playing so poorly that they were lucky to only be trailing by two goals.

Nine minutes into the second period, the Capitals showed their first sign of life. Defenseman Jeff Schultz connected with Ovechkin on a perfect breakout pass and Ovi did the rest, beating Marc-Andre Fleury with a wicked wrister glove side to cut the lead to 2-1.

And yet, Washington failed to capitalize on the momentum. Two goals in a 90 second span by Jordan Staal pushed the Penguins lead to 4-1 and the Caps were suddenly in danger of being blown out in this marquee matchup. Fortunately, that didn’t happen.

Two key moments occurred in the last couple of minutes in the second period to breathe some life into this game for the Capitals.

First, forward Eric Fehr scored on a beautiful individual effort, making the score 4-2. But more importantly, the Caps penalty killers stepped up when they were needed most and gave the rest of the team the push they sorely needed.

Down two goals with Nicklas Backstrom and Tom Poti in the box, the Capitals would have buried themselves if they allowed the Penguins to score on the extended five-on-three powerplay. This moment, more than any other, was when the game officially shifted and momentum swung in the home team’s favor.

Front and center in this comeback was the captain, Alex Ovechkin. He struck twice in the third period, giving him 42 goals on the year and the team’s first hat trick of the season. After rallying to erase a three-goal deficit, the Caps had now tied the game and overtime would be needed to decide a winner.

Enter Mike Knuble. Ovechkin fired a shot from the point that rang off of the post behind Fleury. Before the Penguins goalie had a chance to corral in the puck though, Knuble poked in the rebound and the Capitals were victorious in a game they were completely overmatched in for long stretches.

“We didn’t even talk about the streak in the dressing room,” Fehr said. “We just talked about going out and having a good third period. The streak never came up and now it’s still alive. So it’s a great feeling.”

As Fehr said, the win enabled the Caps to continue their winning ways:

– This marked the team’s 14th win in a row overall, which is a franchise record and the third longest streak in NHL history.

– This was the team’s 11th win in a row at home, which is also a franchise best.

– Caps goalie Jose Theodore has won 10 games in a row, which is a personal best and ties the franchise record set by Pat Riggin back in 1983-84.

– The Caps are an astounding 17-1 since Alex Ovechkin was named the captain. We defy you to find a better start for a captain.

– Speaking of the captain, Ovechkin has scored a goal in each of his last five contests and has 16 points in his last seven games.

Add all of that up, and you’ve got a win that folks around town will be talking about for quite a while. And as if this rivalry needed any more fuel for the fire, the Caps send the Pens back to Pittsburgh searching for answers on how they blew a three-goal lead.

“Both teams want to beat each other pretty badly,” Boudreau said.

Which is why their matchups are easily the best thing going in the NHL these days.

“I am pretty excited and I am really excited for hockey that that game was put on TV today,” said Boudreau. “That’s what people pay to see; when superstars shine and there’s tension and excitement and there’s physical play, you can see the passion on both sides. That’s what hockey’s all about.”

No one knows how much longer the Capitals can continue this amazing streak or how much further this journey will go, but one thing is for sure – in a town where wins are hard to come by, the Capitals are a feel-good story everyone can get behind.