If you didn’t seen this monster hit by Alex Ovechkin yet, don’t worry – neither did Jaromir Jagr.

Team Russia defeated the Czech Republic 4-2 while advancing to the quarterfinals during Olympic play, but there’s only one moment that folks are talking about.

All you need to know is the old-school face of the Washington Capitals met the new guy in charge today and the results were memorable, to say the least.

Jagr had the puck at center ice and in a momentary lapse of judgment, lowered his head and forgot that Ovechkin was nearby. Ovi, the man they call the Russian Machine for good reason, obliterated Jagr with a devastating open-ice hit and Team Russia scored the game-winning goal seven seconds later. For anyone who ever doubted how much of a game-changer Ovechkin truly is, this was a massive reminder of the impact The Great 8 has every time he takes the ice – even without the puck.

“Guys, before you ask me the question, I know I make a mistake,” said Jagr after the game. “It was a big mistake. The hit, I don’t really care. But the mistake was the turnover I made, they scored a goal. that hurt me the most.

“I don’t care how I feel. If something hurt, it’s always healed. But the mistake is not that easy to heal,” Jagr said.

Ovechkin, as to be expected, downplayed the hit.

“It’s just a moment,” Ovechkin said. “If I have a chance to hit somebody, it doesn’t matter who it is.”

But while Ovechkin had already moved on, Jagr might not be able to do the same as quickly.

“I wish I had a concussion,” he said. “That way I would forget Ovechkin quicker.”

If we could have been anywhere when “The Hit Heard ‘Round The World” happened, it would have been seated next to Capitals owner Ted Leonsis.

We’d love nothing more than to see his reaction when the two biggest names he’s ever had on his payroll collided. We’d never put words in Leonsis’ mouth, but we’d venture to guess he couldn’t help but smile seeing Ovechkin come out on top. 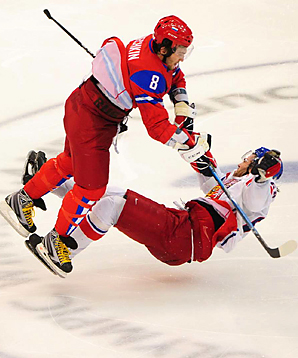