redskins should say goodbye to gray 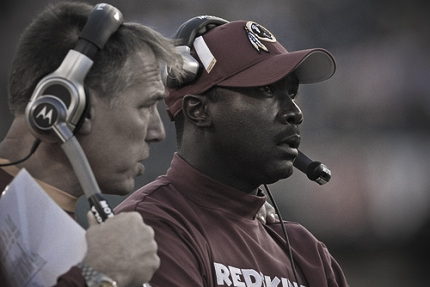 After a grueling regular season that ended with a disappointing 4-12 record and resulted in a major organizational overhaul, things have (thankfully) quieted down for the Washington Redskins.

Other than players doing exit interviews and, in the case of guys like defensive end Andre Carter, getting surgery after another season worth of bumps and bruises, the only other real news these days involves new head coach Mike Shanahan rounding out the rest of his coaching staff.

Names like Jim Haslett, Kyle Shanahan and Bobby Turner have been added, while coaches like Sherman Smith, Stump Mitchell and Greg Blache will move on to the next chapter in their respective lives.

While Shanahan (the elder) still has a few more decisions to make while finishing his coaching staff here in Washington, one name who appears to be on the outside looking in is Jerry Gray, who has served as the team’s secondary coach since 2006.

After interviewing for the head coaching position and the defensive coordinator gig, Gray landed neither. Now, it is being reported that Gray’s time in D.C. may be coming to an end – with Gray being given permission to interview for a possible job with Pete Carroll, who just took over the Seattle Seahawks.

Let us be perfectly clear – this isn’t a bad thing.

We don’t have anything personal against Gray, but over the last few months he’s become a bit of a lightning rod for controversy. And in all honestly, that’s something the Redskins can do without.

As previously noted, Gray interviewed for the head coaching job of the Redskins. Criticism, from inside and outside of football, mounted when it was learned that he did so while Jim Zorn was still holding the job. Some wondered how a coach could be so disrespectful and, in their words, stab Zorn in the back by not even having the professional courtesy to wait for the job to officially become vacant. Conspiracy theorists concocted a scenario in which Gray knew he wasn’t a viable candidate for the job, but he interviewed as a personal favor to management to help them satisfy the Rooney Rule, which mandates that at least one minority candidate be interviewed.

“You scratch my back and I’ll scratch yours.”

Of course, that was never the case. As we’ve previously written, Gray interviewed for the job for one simple reason – he wants to continue to climb up the coaching ladder. Having already interviewed for the head coaching job at the University of Memphis earlier in the year, Gray jumped at the chance at a possible promotion within his own organization.

Once Blache walked away from his media obligations during the season due to medical reasons, Gray stepped up and assumed those responsibilities. When the Redskins needed him to step up, he did so without a second thought. In his eyes, that showed what kind of team player he is. He had to be thinking: what’s the big deal if I jumped the gun by a couple days and interviewed for a position that everyone knew was going to eventually be available? Does it honestly change anything whether I interview for the job now or three weeks later?

We’re not going to crucify Gray for the timing of the interview. We can completely understand someone who doesn’t plan on working in the same job for the rest of their life, so why hold it against Gray if he was simply trying to advance his career?

Now, that being said, there are two reasons we’d be okay if Gray moved on to another organization.

First of all, one of the top priorities of Shanahan and general manager Bruce Allen should be to remove any and all controversy surrounding this franchise. This new regime represents the perfect opportunity for a fresh start. And let’s be honest – when it gets to a point where young players are openly mocking the situation by referring to the area as Drama City, you know you’ve got problems. If turning the franchise around means moving on without Gray, running back Clinton Portis or anyone else, then we’re all for it. The Redskins have had more than enough dysfunction recently.

Our second reason is simple – Gray failed at his job. Think about it; was there a more disappointing unit on the Redskins last season than the secondary? Sure, the offensive line was a joke, but that’s because the front office neglected it. Joe Bugel still did a masterful job of coaching up the substandard group he was handed.

Meanwhile, Gray was given a stack of former first rounders – LaRon Landry, Carlos Rogers, DeAngelo Hall – along with established names like Fred Smoot, Chris Horton and Reed Doughty, and yet, the team was incapable of stopping anyone.

Out of those six names, maybe only Doughty has seen he’s stock rise from a year ago to now. Landry apparently gave up on trying to play safety. Instead he runs around attempting to “hit stick” anybody nearby. Landry and Rogers were so pitiful against any receiver who did a double move, that we openly joked if they trapped us in a dark alley, we know how to get out of there untouched.

Prior to his season-ending toe injury, Horton played well, but he was also benched in the first month of the season for reasons that are unclear. Hall is one of the only players in that secondary who is capable of creating turnovers, but he also gets burnt from time to time and isn’t exactly the best tackler in the league. Both Smoot and Rogers also dealt with limited playing time at various points in the season as the coaching staff attempted to deliver a wakeup call to them for their uneven performances.

When the team added defensive tackle Albert Haynesworth and rookie linebacker Brian Orakpo, they made it clear the plan was to disrupt offenses in hopes of getting more sacks and turnovers. Even with Haynesworth in and out of the lineup, the defensive line did a masterful job of creating pressure, as the ‘Skins finished with 40 sacks a year (up from 28 the season prior).

In 2008, the Redskins were tied for 17th in the NFL with 13 interceptions. This season, even with a vastly improved defensive front, the Redskins secondary actually regressed – tying for 27th with 11 picks.

To recap: they got torched for big plays all year long, couldn’t make a stop when the game was on the line, half of the secondary was benched at some point during the season due to ineffectiveness and statistically speaking, they’re moving in the wrong direction. Which part of that comes across as a ringing endorsement for Gray?

So yeah, forgive us for being okay if the team and Gray part ways. We don’t think he’s a bad person and don’t buy into the notion that he acted shady and underhanded. We just don’t think he did a good enough job to warrant any sort of promotion here. If some other team wants to make him their defensive coordinator, it really might be best for everyone involved.