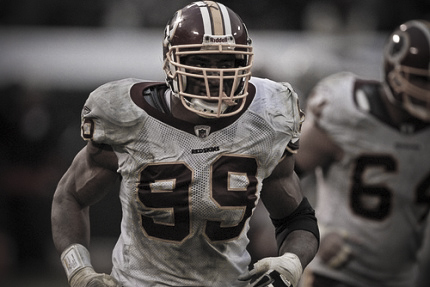 When Washington Redskins owner Daniel Snyder made the decision to move in a different direction and Vinny Cerrato agreed to resign from his role as the team’s executive vice president of football operations, it caught most everyone by surprise.

Although many disgruntled ‘Skins fans dreamed of a day without Cerrato, few actually believed the move would happen any time soon. Turns out, the move wasn’t just stunning to the fanbase. Very few folks at Redskins Park knew the change was coming – especially before the season even ended.

“This morning my reaction was shock, because it was the first time I heard anything with Vinny,” said head coach Jim Zorn. “Then later on I had a chance to hear about Bruce and we had a chance to sit down this afternoon before practice.”

Shortly after the Allen press conference ended, practice concluded and Redskins players began heading back into the building. We caught up with a couple players to gauge their reactions to the sudden resignation.

“It was a shock to me,” said defensive end Andre Carter. “But at the same time, this is the NFL and on any given day, anything can happen. That’s how you kind of have to prepare each day. You’ve got to anticipate the unexpected.”

Didn’t Cerrato play a part in you coming to Washington back in 2006?

“Yeah, and I do appreciate him,” said Carter, of Cerrato. “When it came to free agency, he was the first guy to call, along with Joe Gibbs, so I appreciate him doing the job and giving me an opportunity to come here. It’s been a blessing.

“Every now and then I’d exchange a few words with him, but that’s it,” Carter said. “It’s a tough business in the NFL. You don’t know what to expect. Vinny resigned and we’ve got a new GM. I don’t know who the new man in charge is going to be …”

While you were on the practice field they already named Bruce Allen the new GM. He previously worked in Tampa Bay …

Over the last decade, his teams have won their respective divisions five times.

“Yeah, it seems like he’s got a great track record,” he said. “But I think winning is a process. You can’t win overnight. You bring in the right guy, the right type of talent and develop the right level of camaraderie and execute, and you’ll be successful. It’ll be interesting to see what changes he makes. I’m sure being the new man in charge, he’ll evaluate us and, at the end of the day, we’ll see what happens.”

Let me ask you, as someone who has played against those Buccaneer teams, what is your impression of a Bruce Allen football team?

“I remember during their Super Bowl run, they had a great year,” Carter said. “They were very successful, obviously. They were a close-knit group, but that happened over an accumulation of time. I think it took two or three years for them to get there. But that’s what it usually takes to develop into a championship-type team. It takes time. We’ve got the talent. We just need to develop that level on consistency as players. There’s a fine line between where does it start up top and where does it stop on the bottom.”

While reports are slowly surfacing that Cerrato wasn’t necessarily the most popular figure to those inside the locker room, not everyone was lining up to bash him.

“It’s going to be different, not having Vinny around,” said receiver Devin Thomas. “He’s obviously one of the guys responsible for bringing me in, but he’s also someone I talked to pretty much every day. He’d always give me tips or tidbits on what I need to get better on or commending me on the things I’ve been doing well. It’s kind of rough, knowing he’s gone, but I’m sure I’ll keep in contact with him and I wish him the best.”

We’ve talked about that in the past, that you have a solid relationship with Cerrato. We’ve been there when you’ve talked with him after games and heard him give you feedback. Obviously you young guys have taken a lot of heat over the last two years by people rushing to judge you. Do you think you’ve been close with Vinny because he also was targeted by those same critics?

“Yeah,” Thomas said. “I mean, I can’t really speak on any past decisions he’s made, but as far as bringing us in, I feel like he’s made good moves by trying to build a promising future for us. He’s tried to add some explosiveness with the picks that he’s made. It’s tough. It’s a tough game and a tougher business.”

The organization moved quickly to name Cerrato’s replacement, tasking Allen with turning around this once-proud franchise. He had success in Tampa and Oakland. It was obviously before you were in the league, but you’re a fan of the game. What stood out to you about those teams?

“I remember in Tampa Bay, that great defense,” he said. “And he was in Oakland too, and they met up in the Super Bowl, so that says something. But that Tampa Bay defense had something going on, and they had Jon Gruden over there. You don’t ever know what he plans on doing, so we’ll just have to wait and see.”

Were you surprised at the move, or maybe the timing of it?

“Yeah, I mean, it kind of catches you off guard,” Thomas said. “The tragic story today was Chris Henry, obviously. That’s the saddest news of the day. But with Vinny gone, it’s kind of surprising that it happened at this time of the year.”

Have you heard anyone in the locker room talk about Cerrato’s departure?

“Nah, I don’t really think anyone has too much to say,” said Thomas. “Around here it’s just Drama City anyways, so something’s bound to come up. It just so happens that he’s not going to be here anymore. Just another dramatic situation out here.”