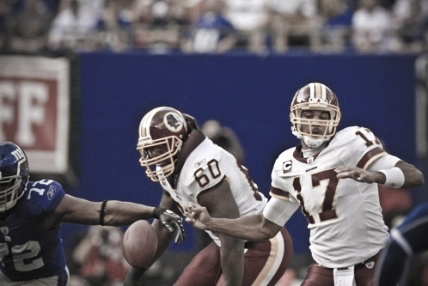 Jason Taylor in Washington was a complete failure. This is not even debatable. Sure, he’s been a Hall of Fame caliber player the other 12 years of his career, but his one season as a Redskin was downright embarrassing.

And why is that? Because the coaching staff developed a gameplan heading into the 2008 season that was built towards the strengths of Phillip Daniels, not Taylor. Once Daniels, a 305 lb. defensive end, was injured on the first day of training camp, the front office moved quickly to acquire Taylor. And even though Mr. Dancin’ with the Stars weighs 50 pounds less than the guy he was tasked to replace, the team never altered the gameplan.

They took a perennial Pro Bowler who made a career out of speed rushing on the edge, and asked him to be like Daniels, a solid, but unspectacular power-based end. It’s that whole “square peg, round hole” kind of deal. It’s also why we don’t blame Taylor for failing in D.C.

Great teams look at their roster and build their gameplan around the strengths of their players. Unfortunately, recent history shows the Redskins don’t.

So why are we bringing up Taylor? Why can’t we do like the rest of folks around town and pretend his time in burgundy and gold never happened? Well, because we can’t help but see a parallel between Taylor’s situation a year ago and the ongoing struggles of quarterback Jason Campbell and Jim Zorn’s West Coast Offense.

It’s pretty much universally agreed upon that Campbell is not your prototypical timing-based, precision passer this offense requires. He’s much more comfortable throwing intermediate to long passes than what he’s currently being asked to do by Zorn. Campbell is also much more comfortable playing out of the shotgun (which likely stems from playing behind a mediocre offensive line in Washington) than lining up directly behind the center. Even Zorn knows this.

“I think he plays well in the ‘gun,” Zorn said of Campbell to the Washington Post earlier this week. “He’s a tall guy. It’s immediate pass protection right at the snap.”

The topic of Campbell and the shotgun came up during our interview with Doug Farrar, who authored the Washington Redskins chapter of the Football Outsiders Almanac 2009. Here’s what he had to say:

“The one thing I’d like to see more of from Campbell and the Redskins offense is him in the shotgun. Last year, Campbell had a DVOA [defense-adjusted value over average] of 9.1 under center and a 35.6 in shotgun,” Farrar said. “And we’re not talking about a small sample size. There were over a hundred shotgun attempts. The Patriots, Chiefs and Cardinals all ran over 50 percent of their offense from the shotgun last year and it would help Campbell a lot. He seems to be able to progress in his reads better when things aren’t so much in his face and he can get a sense of what’s going on down the field.”

Campbell threw 506 pass attempts in 2008, and according to Farrar, a hundred or so came out of the shotgun. That’s roughly 20 percent of the time. So if you’re a Redskins fan who is tired of the inconsistent play for Campbell, just know his head coach only saw fit to play to his strengths once every five passes, statistically speaking.

Here’s how things played out in the season opener for Campbell when he threw out of the shotgun versus when he lined up directly behind the center.

In the shotgun, Campbell completed 15 of 17 passes for 161 yards and a touchdown (9.5 yards per attempt) against the Giants. Behind center, Campbell was just four of nine for 50 yards (5.5 yards per attempt). And, oh by the way, he also threw an interception and was sacked three times. Those numbers make the case far better than we could.

We already brought up Zorn’s predictable playcalling in regards to the running game earlier this week, but this is the other area that concerns us the most. Zorn went on record repeatedly this summer saying emphatically that Campbell is his guy, while his own front office attempted to acquire several other high-profile quarterbacks.

If that’s the case, then why not actually put Campbell in a position to succeed? Why go out of your way to lobby for management to keep him, if you’re just going to continue to try and force that square peg into the round hole? Either use him the way he’s best suited to help your team win football games or move on to a quarterback who better fits your vision. By continuing this charade, you’re only bringing down everyone involved and ensuring that no one wins – both metaphorically, and in the standings.