playcalling still a work in progress 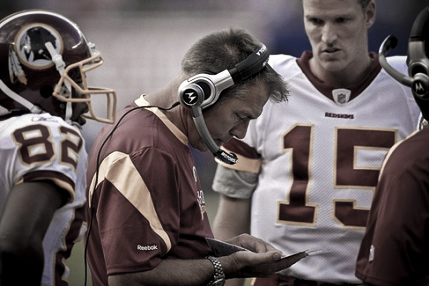 On the first offensive play of the Washington Redskins’ 2009 season, running back Clinton Portis rushed for 34 yards. Unfortunately, things went downhill from there.

While standing on the sidelines of Giants Stadium, we couldn’t help but dwell on what we thought was lackluster playcalling by head coach Jim Zorn – especially on first downs.

With that in mind, we went back and logged every play the Redskins ran on first down. Here’s the breakdown:

To recap, that’s a total of 22 first downs for the Redskins on the day. The playcalling splits evenly between 11 running plays and 11 passing plays. But, as you’ll see, the production wasn’t nearly the same between the running and passing game.

After picking up 34 yards on the first run of the day, Portis was shut down the rest of the game – especially on first down. Nine times on first down the team handed Portis the ball and he picked up a total of 40 yards (which translates to a healthy 4.4 yards per carry). But don’t be fooled. Take away the big first carry and you’re looking at eight carries for just six yards. We repeat – eight carries for six yards. That’s not going to get it done, folks.

The ‘Skins were so predictable on first-down running plays that Portis ran to the left – behind tackle Chris Samuels and guard Derrick Dockery – eight out of nine times. Of course, the one time he tried to run behind right tackle Stephon Heyer, Portis was stuffed for a six-yard loss. So it’s not difficult to see why the team kept trying to run left, even when it wasn’t successful.

As for the passing game on first downs, Campbell completed eight out of 10 attempts for 109 yards and a touchdown. That’s 10.9 yards per completion, and translates to a robust 145.4 quarterback rating. So basically, when Campbell was allowed to throw the ball on first downs, he picked apart the Giants defense – especially down the middle of the field (as evident by the abundance of passes to Cooley and Randle El).

So where are we going with all of this? We realize that last season the bread and butter of the Washington offense was a potent rushing attack, led by Pro Bowler Clinton Portis. However, the Giants have a suffocating defense, which starts up front with their stout defensive line, that rarely gives up much in the way of rushing yards.

Clearly, Campbell fared well on first downs when he had time to throw the ball. Sticking with more of the short and intermediate passes would have forced the Giants defense to back off and helped open things up a little for Portis on the ground.

Instead, the ‘Skins seemed content to run Portis into a wall, take the two yards per attempt and run their offense three plays at a time. Unless you’re an avid fan of punter Hunter Smith, that’s not the kind of football you want to see your favorite team run.

But all is not lost. The Giants, just two years removed from a Super Bowl victory, remain among the league’s elite. And at times this past weekend, the Redskins were able to make plays and move the ball against New York’s aggressive defense.

Between now and Sunday, Zorn needs to take a critical look at his offense and, more importantly, his playcalling. Figure out what worked, and continue to develop ways to stick with what works. For the rest, see what adjustments need to be made, and if you can’t fix it, then scrap it.

A season cannot be won or lost in week one, but there are definitely lessons to be learned from this game. Here’s hoping Zorn and friends are willing to make an honest assessment of the situation and are willing to do what is needed to help get this offense to where it needs to be. Otherwise, it’s going to be a long year.