finishing up with the football outsiders 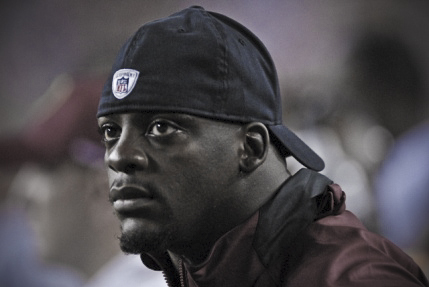 Last week we brought you part one of our conversation with Doug Farrar, who authored the Washington Redskins chapter of the Football Outsiders Almanac 2009. Most of our conversation in part one centered on Jason Campbell and the quarterback situation, but that wasn’t all we talked about. In part two, we focused more on the rest of the offense and what to expect in 2009.

One of the things that really stood out in this year’s Football Outsiders Almanac was just how high the Redskins receivers ranked in dropped passes. When you watch a guy like Braylon Edwards, you notice him dropping a ton of passes. But it was definitely surprising to us to see Santana Moss and Antwaan Randle El ranked so high on the list. Were they as bad as the numbers seemed to indicate?

“I think, when you’re talking about dropped passes, it really depends on the offense,” Farrar said. “We don’t want to say that Campbell would automatically be a Hall of Famer if he was in the perfect circumstances. There are things he needs to work on still. One of the things I saw when I watched film was a tendency to bail on a play and not stick with it until its logical ending. Meaning, basically, there are times when he makes a throw before he should. For example, one stat we tracked was he averaged 5.86 per attempt on third and eight or more. That’s obviously not going to get the job done.

“One of the things that separates the great quarterbacks is the ability to stay in the pocket for that extra second or that extra touch they can put on a pass so that the ball is in the perfect location when that receivers turns, with the ball right over his back shoulder,” he continued. “Campbell’s not there yet. I don’t blame him entirely, because this offense is all about time and rhythm and was new to everyone last season. A bulk of the dropped passes were the receivers’ fault, but some of them were Campbell’s fault as well.  Yeah, the amount of drops was a problem, but it doesn’t stand out as much as a guy like Edwards or Terrell Owens – where a team has one marquee guy who does it a lot.

“The one thing I’d like to see more of from Campbell and the Redskins offense is him in the shotgun. Last year, Campbell had a DVOA of 9.1 under center and a 35.6 in shotgun,” Farrar said. “And we’re not talking about a small sample size. There were over a hundred shotgun attempts. The Patriots, Chiefs and Cardinals all ran over 50 percent of their offense from the shotgun last year and it would help Campbell a lot. He seems to be able to progress in his reads better when things aren’t so much in his face and he can get a sense of what’s going on down the field.”

We talked about the passing game. Now let’s switch gears and focus on the running game. Do you guys still believe Clinton Portis is one of the league’s elite running backs?

“He is, in my mind, by far the best pass blocking back in the game,” he said. “It’s not even close. He can still catch. He can still run. He led the league in rushing yards through the first eight games last season. But now, because they can’t fix the offensive line, the team has said that Ladell Betts will be the third-down guy. Even though the numbers show Portis was more effective than Betts was on third down. But it’s easier to say you’re addressing the problem by making changes to one position instead of half the offense.

“As far as I’m concerned, Clinton Portis is one of the top 10 running backs in the entire NFL,” Farra said. “There were going to be possible overuse issues, had he stayed healthy. He was on pace for 374 carries, which is a bit much for anyone. And he’s going to be 28, which is when running backs begin to trend downward, for the most part. But to me, he has always been and continues to be, one of the best in the game.”

If you had to put money on just one of the three second-year pass catchers – Devin Thomas, Malcolm Kelly and Fred Davis – succeeding, who you got?

“I would think from a tools standpoint it would be Thomas,” he said. “But we really didn’t get to see a lot from all of them. The thing about this offense is that you don’t need that one elite receiver to make it go. That’s why I thought the Redskins might have overcompensated by drafting all of those guys. Brett Favre, when he ran this offense during his Super Bowl years, did not have Sterling Sharpe anymore. He had Antonio Freeman and a bunch of other guys who were good, but not great. When the Seahawks went to the Super Bowl in 2005, Matt Hasselbeck’s lead receiver was Bobby Engram. The receivers don’t need to be great. They just need to get the timing of the offense down and run the right routes.”

What can we reasonably expect from the 2009 Washington Redskins?

“That’s a tough one,” Farrar said. “That’s a real tough one. I’d feel a lot better about this offense if they’d addressed the issues on the offensive line. We added a new stat to the book this year, and we talk about it in the St. Louis Rams chapter, teams that draft offensive linemen – specifically tackles – totaling 1,200 on the draft value chart, whether it’s one lineman or two combined, have major upswings in offensive DVOA the next year. And it makes sense because you’re increasing your protection.

“Well, Vinny Cerrato has opted not to upgrade that offensive line through the draft, even though it’s cheaper and a more long-term solution,” he said. “You could say he originally drafted Derrick Dockery, and now he’s brought him back, but otherwise, I’d feel a lot better about their chances if they’d done more to add offensive line depth.

“As long as Moss, [tight end Chris] Cooley and Portis all stay healthy, they should be okay,” Farrar said. “I think they’re going to be wonderful defensively. They forced the most three-and-outs of any team in the league last year, and there’s no reason to think that won’t happen again this year. I think their front seven could be fairly dominant. If they’re going to get anywhere in that brutal division, it’s going to be because of that defense.”

There are some folks in town who are convinced we’ve seen the best we’re ever going to see from Campbell and that when he’s finally run out of town, he’ll never be a starter again. What say you?

“I don’t see that at all,” he said. “Campbell doesn’t have any real problems in his release, delivery or dropbacks. There are no mechanical issues that would keep teams away. His biggest problem has been that he hasn’t been able to stick in one system for any extended amount of time. I’ve always thought that quarterback is the one position people hold the least amount of patience, and it’s ironic, because it’s the position in all of sports that requires the most.

“If Campbell were to go to a team with a good offensive line and a couple of good receivers, he’d be fine,” Farrar said. “I mean, what happens if this is Kurt Warner’s last year and the Cardinals lose complete faith in Matt Leinart and they signed Jason Campbell? Do you really think Campbell is going to fail with Anquan Boldin, Larry Fitzgerald and Steve Breaston as his receivers? I don’t.”