redskins are nothing without samuels 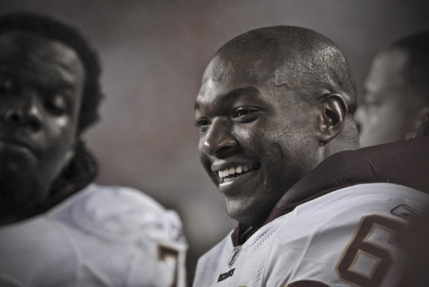 Over the last few weeks we ran a two–part interview with Doug Farrar, who authored the Washington Redskins chapter for the Football Outsiders Almanac 2009.

While several interested nuggets came out of that conversation, the most intriguing item was Farrar’s claim that the entire 2008 season unraveled because of the injury to Pro Bowl tackle Chris Samuels.

As a refresher, here’s a quick recap:

“They posted their three worst [defense-adjusted value over average] totals in week eight, when he was out with a knee [injury] and then the last few weeks of the season, once he was done for the year,” Farrar said. “One of our stats – adjusted line yards – tries to separate as best we can, an offensive line performance from a running back performance. Weeks one through seven, they had a 4.86. Weeks eight through 13, it was 4.20. That was with Samuels out one game. Weeks 14 through 17, it was 3.74, meaning it plummeted an entire yard.”

Armed with this information, we felt obligated to ensure Samuels knew just how vitally important he is to the team’s success.

Hey Chris, did you know the downfall of the entire 2008 season was your injury?

“I tell you what, we’ve got a great group of lineman up front,” Samuels said, attempting to go into ‘player-speak’ mode. “We’re solid up front, in my opinion. We lost some good players from last year, but we replaced them with good players like Derrick Dockery and now with Stephon Heyer starting. So I can’t just take credit for anything like that. Maybe in those particular games they were doing something different on the defensive side with their schemes against us.”

No, sir. When the stats show the Redskins offense basically shut down without you in there, you can’t downplay this …

“The defense had a great game that day,” he said with a laugh.

The Bengals? You’re going to play that card when we’re talking about losing to Cincinnati?

“Yeah, they played great,” Samuels said. “I watched the game on TV when I was injured, and they did a great job.”

We’ll give you a chance to brag about your offensive line because you’ve all looked good this preseason, but we need you to admit, this team is nothing without you.

(Laughs). “You know that you’re not going to get anything out of me of that nature,” he said. “I’m telling you, they must have had a good scheme on us.”
Fine, be that way. Go ahead and talk about your offensive line.

“So far, so good,” Samuels said of the offensive line’s performance thus far. “We’re doing some good things. But can we improve? Yeah, there’s a lot of things we can do to continue to improve our techniques. I think as this group continues to play alongside each other, we’re going to continue to head in the right direction. But, so far, so good.”

Samuels might not admit it, but everyone else knows that for all the talk of whether or not Jason Campbell is the long-term solution at quarterback, he’ll only go as far as his offensive line takes him. And that starts with Samuels, the six-time Pro Bowler.

If he stays healthy, then the Redskins offense should be poised for improvement in year two of the Jim Zorn era. If not, then brace yourself for more letdowns and meltdowns of Bengal proportions.