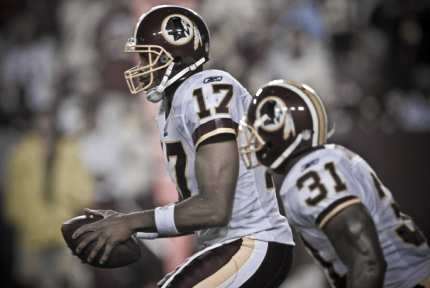 Last week, we caused a bit of a ruckus with our post dedicated to Washington Redskins quarterback Jason Campbell and the haters who love to blame him for all the world’s troubles.

Using some of the comprehensive research compiled in the Football Outsiders Almanac 2009, we attempted to show folks that a lot more than Campbell contributed to the Redskins’ second-half collapse.

We never claimed Campbell was without fault, but we attempted to remind the locals of other contributing factors – like the offensive line wearing down as the season went on and the receivers ranking surprisingly high in dropped passes – were as much to blame for the disappointing finish.

We admitted up front that we like Campbell and hope he’s given a fair chance to succeed. But in the interest of fairness, we opted for a second opinion on the matter. So we recently chatted with Doug Farrar, who wrote the Redskins chapter of the Football Outsiders Almanac 2009.

We might be homers, but Farrar lives in Seattle and has no allegiance to the Redskins. His take on the situation comes from hours upon hours of research and watching game tapes.

“Last year’s story was obviously the tale of two halves for Washington,” Farrar said. “Obviously they were marvelous in the first half. They were the first team in NFL history to go five games without a turnover. And then, in the second half, everything fell apart on offense.”

Okay, so from your vantage point, what went wrong?

“We can trace almost all of it back to Chris Samuels,” he said. “So, of course, the Redskins being the Redskins, did nothing to shore up their offensive line. Bringing back Derrick Dockery was an interesting move, but at the same time, they got rid of Jon Jansen and passed entirely on the two best back-to-back tackle classes in NFL draft history.”

Wait, did you just say the entire season was lost because of Samuels’ injury?

“They posted their three worst DVOA totals in week eight, when he was out with a knee [injury] and then the last few weeks of the season, once he was done for the year,” Farrar said. One of our stats – adjusted line yards – tries to separate as best we can, an offensive line performance from a running back performance. Weeks one through seven, they had a 4.86. Weeks eight through 13, it was 4.20. That was with Samuels out one game. Weeks 14 through 17, it was 3.74, meaning it plummeted an entire yard.”

For those not familiar, DVOA stands for defense-adjusted value over average. Without getting super technical, the stat measures the success of a given play and compares it to the league-average for that play given the situation at the time (score, time remaining, down and distance, field position, caliber of opponent, etc.). This is applied to every play during a season to provide DVOA rankings for individual players and teams as a whole.

“It’s not often that you can trace an offense’s demise to the loss of one player,” he said. “The Patriots, without Tom Brady, had the best offensive DVOA in the second half of last season. So even with the best quarterback in the game going down, it doesn’t always necessarily show in the stats. But because of the lack of depth they have on the offensive line, losing Samuels for any length of time simply killed them. And that was just as true for Campbell and the passing game as it was for Clinton Portis and the running game.”

You mentioned Campbell. There is a section of the local fanbase – we’ll call them the vocal minority – who would rather see Todd Collins, Colt Brennan, Jay Cutler or Mark Sanchez running the Redskins’ offense. You have no dog in this fight, so what say you?

“Let’s start by looking at the other options,” Farrar said. “Todd Collins had nice continuity with the Al Saunders offense, which was one of the things that Campbell had to overcome. Collins played well in a specific offense he’d run for years and suddenly it was ‘Oh my god, let’s lock Collins up for the next 10 years.’ Colt Brennan is still learning the game. He’s still learning under center, and the success rate for spread offense quarterbacks isn’t really great. That doesn’t mean that he can’t be good, but he’ll have a longer way to go than a guy like Campbell – especially in a west-coast offense.

“If you look at Jay Cutler, his specialty – what makes him exceptional and an above-average quarterback – is his feel for throwing the deep ball,” he continued. “The last time I checked, you need an offensive line to at least provide reasonable pass protection to get your receivers downfield so you can throw those beautiful passes deep down the field. The Denver offensive line is marvelous. But if you put Jay Cutler in Washington, he’ll be throwing seven-yard check downs all day or he’ll get killed. There’s no way, with that pass protection, he’ll be able to do what he did with the Broncos.”

“Mark Sanchez had just 16 starts in college,” Farrar said. “Now, he’s kind of a prodigy when it comes to picking up an offense. I interviewed him before the draft and was tremendously impressed. I love what I see from him on film, but for him to succeed, he’s going to have to be set up for success like Matt Ryan and Joe Flacco on a run-heavy, low-risk team. If you put Sanchez in Washington … I don’t even want to think about it. He’d have all those expectations and the people arguing against Campbell would be begging for him to come back in three months.”

So what about Campbell?

“I’m beginning to lose track, but he’s been in something like seven different offenses since he first got to Auburn,” he said. “I talked to Jim Zorn at the 2008 combine and asked if he planned to implement the entire Mike Holmgren west-coast offense. He said yes. He’s got Sherman Smith there and he wanted Clinton Portis to be Shaun Alexander, only with better pass-blocking abilities. He wanted Santana Moss to be a better Deion Branch. But there’s absolutely no way a quarterback, any quarterback, can pick that entire offense up in one year.

“Go back to Matt Hasselbeck’s first year,” Farrar continued. “He might not be a top-five quarterback, but it’s acknowledged that he’s above-average. He’s a Pro Bowler. If you watch him in his first year running Holmgren’s offense, it was embarrassing how bad he was. If you look at Brett Favre in his first few years in that system … I mean, the fights that Favre and Holmgren had were epic because that offense is based on timing, rhythm and tempo. It takes a while to get into a rhythm with your receivers. Now, if you add a system like that and add three rookie receivers to the mix, what do you think you’re going to get?”

“This is the part that I fail to understand,” he said. “This is not a simple offense. Zorn had to simplify it down the stretch because the pass blocking was so bad and the young receivers – Devin Thomas, Malcolm Kelly and Fred Davis – combined for just 20 catches for 163 yards and a 42 percent catch rate. I don’t care if you’re Tom Brady, you can’t win with that. I don’t know who you could have put in that situation that would have been able to succeed.

“I think Campbell can run this offense, but it takes two to three years for it to really begin to bloom,” Farrar continued. “Not just for him, but for everything else around him to click – starting with the offensive line, which is still a major problem for them. And the receivers, which is also a problem. I’m not really sure what people are expecting here.”

Needless to say, we had plenty more to talk about. More to come.