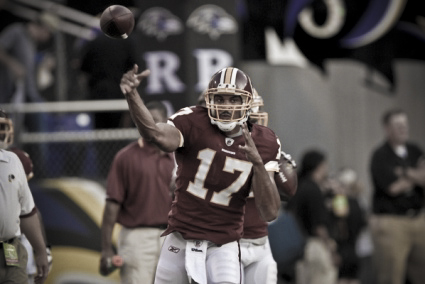 This isn’t breaking news or anything, but Washington Redskins fans love a quarterback controversy. Always have. Always will.

If you’ve been in the D.C. area for football season, you know this.

That being said, if you’re convinced that Jason Campbell was the only reason the Redskins fell apart last season, you’re a sad cliché.

We’ve always felt Campbell was a solid quarterback. In our eyes he’s good, but not great, and with the proper tools around him, is more than capable of getting the job done. But until this point, that was more of a gut feeling than anything else. We didn’t really have any legitimate proof to back up our stance.

That all changed recently when we picked up a copy of the Football Outsiders Almanac 2009. For those not familiar, this book is one of the most ridiculously thorough resources available to fans who really want to learn about football. These guys chart and research everything. If you can dream it up, it’s probably in the book.

We openly admit that we’re homers for Campbell. But the Football Outsiders crew has no such allegiance. If the numbers showed he couldn’t get the job done, they’d have no problem saying so. Even though we’re fans of Campbell, even we were surprised at what we learned.

Here’s what Redskins fans know about last season: Campbell completed 62.3 percent of his passes, threw for 3,245 yards with 13 touchdowns and six interceptions and had a QB rating of 84.3.

Now let us change gears for a minute.

In the first eight games of 2008, Portis rushed for a league-best 944 yards. He averaged five yards per carry and racked up seven touchdowns. In the second half of the season, Portis rushed for 543 yards at 3.5 yards per carry, and had just two touchdowns. Did Portis suddenly forget how to play the position? Were people calling for Ladell Betts or Rock Cartwright (the Colt Brennan of Redskins running backs) to supplant Portis as the feature back? Of course not.

Most fans understood that the offensive line was so bad down the stretch last season that, many times, Portis had to make magic happen just to get back to the line of scrimmage.

And let’s not forget, Jim Zorn told Sports Illustrated this offseason that he had to change his playing calling last year because he knew there were plays in his playbook that the offensive line simply couldn’t do their job long enough to set up.

People heard those comments and Portis got the benefit of the doubt. But because this town simply cannot help but obsess over a potential quarterback controversy, Campbell never got the same respect (even if he played behind the same putrid offensive line). Here’s how Campbell fared during the same stretch:

In the first eight games, Campbell completed 66 percent of his passes while throwing for 1,754 yards, with eight touchdowns and zero interceptions.

In the final eight games, Campbell completed 59 percent of his passes while throwing for 1,491, with five touchdowns and six interceptions.

What’s more, Campbell’s yards per pass attempt dropped from 7.6 yards the first half of the season to 5.4 yards per attempt down the stretch. That only reinforces our belief that Campbell simply didn’t have enough time to look downfield, so he routinely had to settle with check downs and dump-offs.

So, to recap, because of a substandard offensive line, Campbell faced as much pressure as any quarterback in the league. And yet, statistically speaking, he was one of the most accurate quarterbacks in the NFL. His throws were almost always on target, but Campbell’s receivers dropped more passes than anyone else.

His offensive line failed him. His receivers failed him. And at the end of the day, fans (and even his own front office) figured it was easier to blame Campbell than to admit there are much larger problems with Washington’s offense. It makes sense though. It’s easier (and cheaper) to replace one guy rather than half the offense – even if he’s not the problem.

Our only hope is that after this season, Campbell finds himself in a city where he’s truly appreciated and is surrounded with enough talent to show critics exactly what he’s capable of. Just know that when it happens, we’ll be here saying, “Told you so.”

We’ve said our piece, now let’s open it up to Campbell haters …