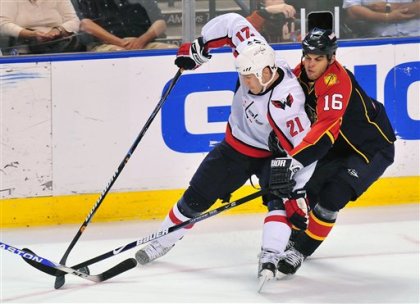 Five years ago the Washington Capitals acquired forward Brooks Laich in a trade for right wing Peter Bondra. While it was a bitter pill to swallow for Caps fans at the time, most folks ultimately understood that moves like this one were necessary in order to rebuild the franchise the proper way.

So far, we’ve talked to the general manager who orchestrated the rebuilding effort, the captain during those dark days and the future Hall of Famer who played against the Caps of yesterday. In the final installment of our look back at the Capitals’ rebuild, we sat down with Laich to talk about replacing a fan favorite, getting blown out and more.

Coming into town, what was your initial impression of the Washington Capitals franchise?

“When I first got here, I was called up and I shook George McPhee’s hand,” Laich said. “I had never met him before, but he shook my hand and said ‘Welcome to Washington. We look forward to having you here for a very, very long time.’ As a 20-year-old, you get traded to a new organization and your world kind of flips upside down. At one point you’re sad to leave a bunch of friends from one organization, but you’re also excited about the opportunity with another one.

“For me to come in as a young kid and our general manager to say that to me, it kind of hit home and made me feel very welcome. Right away everyone here seemed first class and I was excited to be here,” he said. “At the time, they might have taken a lot of heat over it because those were some very popular players they traded, but I think fans would have to agree that it was for the better for the organization.”

Through no fault of your own, you ended up coming into town while fan favorite Peter Bondra was being shown the door. Did anyone hold that against you when you first showed up?

“I hope not,” Laich said. “You know, I had no control over that. I’m not going to try and replace Peter and what he meant and what he’s done for this organization. I’ve been able to meet him and he’s a fantastic guy and we’ve had a little chat about it. He was Mister Washington Capital for years and holds many records. I’m just going to try and play my game and be a solid Capital. It’s kind of neat to be able to say I was traded for one of the all-time greats in the organization, but I hope that people aren’t going to think I’m going to try and score 55 goals a year. I’m just going to play my game and try to help us win. I think that’s more important.”

It’s easy now to gloss over everything and just say “there were some tough times,” but honestly, how bad was it?

(Laughs). “It was bad, but you know, we understood that,” he said. “We understand that we were young and had some good hockey players, but we weren’t at the level that we could be. We knew there was going to be growing pains and it was gonna take time. We knew it wasn’t going to be an over-night process. Like they say, Rome wasn’t built in a day. That was the feeling around here. But we knew that one day we were going to wake up and we were going to be a very good hockey team.

“We took some lumps,” Laich continued. “There were some 5-0, 6-0, 7-1 games – some long nights – but you have to learn from those and we did. We took our beatings and I think we’re a better hockey team now because we went through it. We learned how much we hated losing. No matter how much you lose, you never get used to it. You realize how hard you have to work to win and that’s something I think we’re figuring out even now.”

With that in mind, how rewarding is it now to see all of that hard work begin to pay off?

“It’s so nice, we’re really able to enjoy winning now because we’ve been through the thick and thin,” Laich said. “We’ve all been here when things weren’t as good, and what we were doing was setting the foundation for what was to be a good hockey team. Some of the guys who’ve been moved out, I feel bad for them because they were part of the plan too because they’re not around now to reap the rewards. Fortunately, I’ve been able to stick around and have a contract that should keep me around for a couple more years. I’m just really enjoying it all right now.

“I think we have some really fantastic hockey players and I really, really like our hockey team,” he said. “I think a lot of people are still underestimating our team. I think we’re a very dangerous team and I think we should be a team to watch down the stretch.”

How close is this team to putting it all together?

“That’s the thing,” Laich said. “You know, we’re still growing. I’m not going to say we’re the number-one contender or we’re the best. I’m not going to say that yet because there’s still areas we can improve. We’re still a young hockey team and we’re still learning. The main thing is the desire is there. Watch our star player – Alex Ovechkin – and see how badly he wants to win. That has a trickle-down effect on everybody else and we’re starting to get a taste of success now. We’re putting together some streaks and it’s a fun time to play right now. It only makes us hungrier because we’re curious to see how far we can go.”