the man with the plan 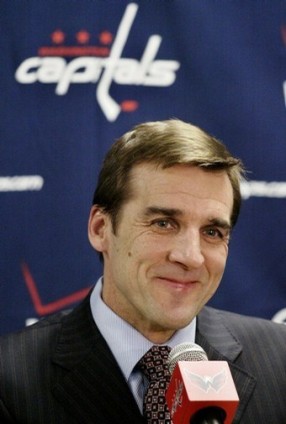 The bar has been set so low for the Redskins, Wizards and Nationals these days that local fans are happy if they finish a season with a .500 record. So naturally, with the Capitals playing some of their best hockey in franchise history, people have gravitated towards them. After all, everyone loves a winner.

While longtime Caps fans are glad to slide over and make room on the bandwagon, we thought it would be helpful for the newbies to get a quick refresher course on how the Capitals got here. You see, this didn’t happen by accident.

The dynamic duo of owner Ted Leonsis and general manager George McPhee got together a couple years ago and consciously made a decision to take a veteran Caps team that was good enough to make the playoffs, but not do anything once they got there, and blow it up. Simply achieving mediocrity wasn’t acceptable. (You hear that Redskins?) They didn’t drop confetti and throw a party just for making the playoffs and getting bounced in round one. (Wizards anyone?)

They had a plan and while everyone knew there would be growing pains, they rightly believed the payoff was worth it. This team, loaded with young talent like Alex Ovechkin, Nicklas Backstrom, Mike Green and Tomas Fleischmann never happens if Leonsis and McPhee don’t make the hard decision to get rid of older players like Jaromir Jagr, Robert Lang, Michael Nylander and Peter Bondra. Sure, Nylander is back, but old habits die hard. And more importantly, this team is built to compete for championships now.

We caught up with George McPhee after the Red Wings game this weekend to hear straight from the source what went into rebuilding the Capitals of yesterday so D.C. could “Rock the Red” today.

For starters, what goes into building a team? Are you someone who values the draft more than free agency or vice versa? How would you go about building a team from scratch?

“Well, you have to use every resource available,” said McPhee. “Ideally, you get your best players through the draft, so you always put the emphasis on that part of rebuilding. If you look at any successful team, they’ve drafted well.

“In addition to that you’ve got to make good trades and you have to sign the right free agents,” McPhee continued. “Whether it’s a top-end free agent or a guy that’s going to play a lesser role, they have to be the right people. When you’re doing it, the theme is ‘Let’s find talent, but they have to be good people, quality people as well.’ I think that’s what we’ve done well so far.”

You took a team that was good enough to make the playoffs, but wasn’t much of a threat to do anything once they got there and made the difficult decision to blow it up, take your lumps and rebuild this team in what you felt was the right way. How hard was it to come to that decision, whether it’s convincing ownership, the fanbase or whatever?

“There’s a lot of risk in that kind of move because if you don’t rebuild it you’re going to lose your fanbase forever,” McPhee said. “Nobody is going to come to the games. You have to be mindful that if this doesn’t work, it could really hurt the franchise and it’s self inflicted. So you worry about that, but we assumed that the lockout was coming and it’d be the right time to do this sort of thing and get rid of expensive veteran contracts and get down to where we’re in a new [collective bargaining agreement] that would require us to be more frugal. With that in mind we did it and fortunately it’s been working.”

Human nature says that selfish thoughts are going to sneak into your head and you might be inclined to worry about yourself and your job security because ownership might not stay committed to this long-term plan. Did you ever have any of those thoughts or were you and Ted Leonsis on the same page pretty much from day one?

“No, we all agreed to do it – Ted, [team president] Dick [Patrick] and I,” McPhee said. “It’s not my team. They own the team, it’s what they wanted to do and it’s my job to tell them how I think it would work – what are the benefits and what are the risks? – and sort of educate them on what I think the process would be so that when we are taking our lumps nobody panics. That was the process and there were going to be some tough nights. It’s not much fun walking into a building knowing you’re probably going to get thrashed. But you get through that and you make sure your team is gritty and competitive and the wins will come at some point.”

We’ve had complete faith in you guys because we see you’re able to turn Robert Lang into Tomas Fleschmann and a first-round draft pick that became Mike Green. Parting with Peter Bondra was tough for a lot of fans, but you get someone like Brooks Laich who is a big contributor on this team. It’s one thing to decide to rebuild, but it’s a whole other thing to know that the decision makers are going to get it right. You guys were able to trade seldom used Brian Sutherby for a second rounder and then turn that into Christobal Huet, who was huge down the stretch last year. So what’s your secret?

“I think you get better with experience,” he said. “Our amateur scouting staff was young when we first hired them and they were making their mistakes early on, but they’ve gotten to be really good. The same could be said about our pro scouting and management. Moves like we made this summer, when we traded [defenseman Steve] Eminger for a first-round pick and turned it into [defenseman John] Carlson, I think that’s going to be really big for this club. They’re not all going to work out, as I’ve explained to ownership, not all the trades or draft picks are going to work out, but if you keep doing the right things often enough, it’ll go the right way.”

We’re in the salary cap era now and experts say dynasties are gone and it’s nearly impossible to keep a good young team together. The Capitals aren’t even to that level yet and people are already saying you guys won’t have the cap space to be able to retain guys like Nicklas Backstrom and Alexander Semin once their deals are up. Are you going to be able to find a way to keep these young, core players?

“We’ll have the cap space,” McPhee said. “We’re not worried about that. In fact, we’re one of the clubs that, two years from now if this cap goes down, we’ll still be in pretty good shape. We have flexibility and optionality, and you’ve got to have options. That’s the way we’re going to operate. There will be a few players who we’ll lock up long term and everyone else will be on short-term deals.”

We know you’re not going to come out and give away any secrets, but between now and the trade deadline is it safe to say you’re going to be checking your options and seeing what deals you might be able to pull?

“Well, you have to do that,” he said. “Whether you make no moves or five moves, you have to do all the research and homework and decide what’s best for your club. We do that every day anyway.”

But is there a specific area where you’d like to add depth?

“We could add six players if it made us better,” McPhee said. “But we like what we have and we like the way this team is playing. The one area that we’re not happy with is the penalty kill and selfish penalties, and that’s a mental thing. If we don’t make any changes, I’m content that this team can do real well.”

And with that, we let the man known as GMGM off the hook and headed for the exits. We want to thank George McPhee for his time and candor and here’s hoping the decision makers running the Redskins, Wizards and Nationals stumble across this interview and something hits home with them.

While those teams have come to accept mediocrity, the Capitals have raised the bar by showing how a professional sports franchise should be built. It wasn’t always pretty, but now the team is built to be a legitimate contender for the foreseeable future. It sure would be nice to see some of the other local teams follow their lead.