the captain and the rebuild 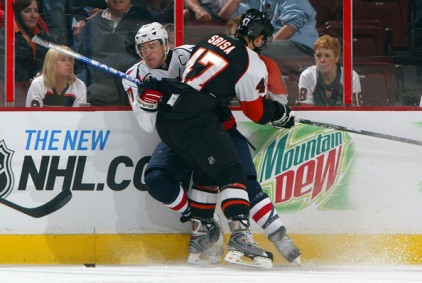 Last week we ran our one-on-one interview with Washington Capitals general manager George McPhee in which he spoke at length about the team’s rebuilding plan that has turned the Caps into a legitimate contender.

We wanted to follow that up with some reactions from others involved during the rebuilding phase, so consider this the second part of the story.

Before Chris Clark’s season ended last week due to a wrist injury, we caught up with the Capitals’ captain to get his take on the rebuild.

Hey Chris, as the captain during that timeframe, just how tough were those rebuilding years?

“It was really tough,” he said. “Especially because I had come from a team [the Calgary Flames] that had just rebuilt, got to that pinnacle and got to the Stanley Cup finals. It was hard in the beginning, but looking at the gameplan, it’s a credit to [the front office] sticking to it and it’s a credit to the guys who are still here from those times who’ve stuck with it as well. We had the draft picks and we had the great scouting staff that picked the right people and knew what it would be like in two or three years. I think we were a little bit ahead of schedule last year in making the playoffs and doing so well, but it was a great decision.”

From a selfish standpoint, it’s got to be tough for a player to arrive right when names like Peter Bondra, Jaromir Jagr and Robert Lang are all being shown the door, right?

“You know, I got the opportunity to get a little more ice time and kind of a second start in my career,” Clark said. “It helped me and it helped a lot of guys, especially the young guys coming up. If they were on another team, they wouldn’t have gotten these opportunities so early in their careers. We might have been losing a lot of games, but we never quit until the last second ticked off the clock. We knew we were fighting for our jobs, whether it be here or other places. We never gave up and always fought as hard as we could.”

There were definitely growing pains, but as you said, it’s paying off now. What do you see from this team now?

“A lot of maturity,” he said. “Just making the playoffs last year, whether it was on the last game of the season or what, helped this team. I think we grew a lot during the summer and the guys who had no playoff games now have seven under their belt. I just think its huge steps for us and, as young as we are, we’re only getting better with experience.”

How does this team take the next step to where you’re annually competing for the Stanley Cup?

“Maturity and knowing what it takes to get there,” Clark said. “Last year, we knew what it took because losing in the beginning of the year we knew how hard it was just to make the playoffs. This year we want to make it an 82 game schedule where we’re pushing the whole way, so it’s not as hard at the end of the year just to make the playoffs. We want to be fighting for a playoff position when it comes down to it, not just trying for eighth place. I think it’s just something we’re going to build up so that, at the end of the year, we’re hitting on all strides.”

While Clark will be sidelined as his teammates close out the season, there’s no doubting his words. This was a team that had to learn to crawl before it learned to walk and now it’s a team dangerously close to learning how to run.

Though losing in the playoffs to a team like the Philadelphia Flyers last year was a bitter pill to swallow, this team is much better prepared to handle a postseason atmosphere this time around.