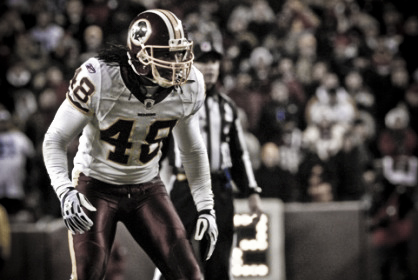 It’s common knowledge at this point that we here at Homer McFanboy have officially adopted Washington Redskins rookie safety Chris “The Predator” Horton.

So when we were wandering around the ‘Skins locker room searching for opinions on the sheer thought of quarterback Jason Campbell attempting to play hockey, we inevitably ended up checking in with Horton.

“I might have said Ashburn and my guy just wrote it wrong,” he said.

Do we need to get you a proof reader or something? We like the idea of you having a blog and think it could be a good way for folks to get to know you better …

“It really is,” Horton said. “I’m really sorry about that. I should have caught that.”

Now that we’ve gotten that out of the way – what kind of hockey player would Jason Campbell be?

“I don’t know,” he said laughing. “He is from Mississippi, and they don’t do too much hockey down there. They probably don’t even have a team that far down south. It’ll probably turn out pretty bad for him. Just make sure there are some trainers there.”

Let’s turn the tables, what other sports can you hold your own in?

“I like to say I’m alright in volleyball,” he said. “Beach volleyball.”

Would you wear the short shorts?

“I could come out there in Speedos, if you wanted me to,” said Horton. “That’s just my personality. I could do a little bit of slow-pitch softball. None of that fast stuff. I like to say I’m a pretty good swimmer. I had a lot of good friends on the swim team when I was in college. I can compete in the backstroke, freestyle, anything.”

We’re hearing a lot of fringe sports. Guess you’re not trying to score an invite out to try hockey with Jason, huh?

“I’m not a big hockey fan,” Horton admitted. “Although I did learn what a hat trick was recently, after the Saints game. Its three goals in a row. I just found out what that was from coach [Greg] Blache. He dropped that on me in the middle of the game. He came up to me and said ‘You’ve got two [turnovers], you need a hat trick.’”

Any other sports you wanna let folks know you’re good at?

“Yeah, but I’m too aggressive,” Horton said. “I’m too physical for basketball. It’s a soft sport. You get touched and it’s a foul. I like to play sports where there’s no penalties or where you can just blow people up. Oh, and I ran track.”

Did you know that both Santana Moss and Clinton Portis are accomplished track stars? Moss could have qualified for the Olympics, but opted to stick with football at the University of Miami and Portis was on a record-setting relay team in high school. Can you take either one of them?

And as we were getting ready to take off, Horton stopped us. He wanted to give us a message to pass on to our neighbor kid.

“Hey Kurt, I’d just like to say that I’ve been giving you props where they’re due for that nickname,” Horton said of “The Predator” label. “It’s become a big hit and I really appreciate it. I’m taking it and running with it.”