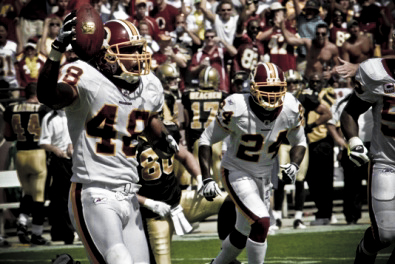 My next door neighbor is the kind of kid you couldn’t pay to watch football. He’s a high school junior who would much rather play his guitar in his basement than tune in to see who the Redskins are playing, which makes this next statement that much more improbable – this past week he came up to me to inform me that rookie safety Chris Horton is his favorite Redskin.

After getting yelled at by his parents, the kid was seeking refuge at my house, only to discover I was actually at FedEx Field covering the ‘Skins-Saints game. So he sat with my wife and watched the maroon and black defeat New Orleans, thanks in large part to Horton’s two interception, one fumble recovery effort.

“He looks like the Predator,” said neighbor kid. “That hair makes him look like a complete badass.”

And just like that, he actually cares about the Redskins.

For those who may not be familiar with Horton’s background, he’s a 6’1”, 216 lb. safety out of UCLA. The Redskins drafted him in the seventh round (249th pick overall) of the 2008 NFL Draft, meaning he was the tenth and final player Vinny Cerrato selected. You probably had stopped watching the draft long before he was chosen, but don’t feel bad – only three other players heard their names called after Horton was drafted.

So if Horton was able to go from the seventh round to NFC defensive player of the week honors while simultaneously converting new fans after just one start, he’s definitely a player everyone needs to get to know. Here’s a transcript of our conversation:

Congratulations on being named the NFC defensive player of the week. Aside from the joke Randy Thomas played on you about the $100,000, how good did it feel to earn the honors after your first career start?

“It felt great,” Horton said. “Just sitting there when I was by myself thinking about it, you know, there’s guys that have been in this league a long time that have never been the NFC defensive player of the week. I feel like it’s a great accomplishment.”

Okay, let’s get it out of the way. Go ahead and give me the party line and downplay your accomplishments last week and say, “My teammates made the plays and I was just in the right place at the right time.”

“Oh, that’s what happened,” Horton said with a laugh. “Obviously if those guys wouldn’t have made those plays and gotten their hands on the balls, then I never would have gotten those picks. I just feel like it was me running to the ball and being in the right spot at the right time with those guys making plays. That’s how I was able to get those picks.”

This is the part where I remind you that this defense set a modern-era record for fewest turnovers in a season. They would get their hands on the ball, and for whatever reason they wouldn’t come away with the turnover. Whether you want to downplay it or not, the fact that you’re converting those turnovers is a big deal.

“Any time you can get turnovers it’s a big deal because you get the ball back to your offense and you get more opportunities for them to score,” said Horton, who only had four interceptions during his collegiate career. “Or, as a defender, if you get your hands on the ball like ‘Los [Carlos Rogers] did today, he almost scored.”

So clearly after such a great debut you should have been the starter this week against Arizona, right?

“No, not at all,” Horton said. “Not at all. I know my role on this team. My role is, if anything happens or when we go into extra packages, then I’m in the game. That’s my role. I’m not really concerned with who starts and stuff like that. I’m just going to keep playing and get better every week. Reed [Doughty] does a great job when he’s out there. To me, he’s the starter.”

Redskins fans are just getting to know you. Can you tell them what kind of player you are and what skills you bring to the table?

“You know, I’m going to hit you,” Horton said. “I’m going to get out there and I’m going to cover tight ends, and I’m not going to allow tight ends to catch the ball in the open field. I’m just a physical football player. I put in a lot of time studying the game of football and try to have the least amount of mental mistakes as possible.”

How the heck did you fall to the seventh round of the NFL Draft?

“Hmmm … ask those guys who said I wasn’t good enough to play,” he said. “I don’t really know. I don’t really worry about it now. Those other teams – they’ve got to be concerned when they see number 48 on film because when I show up, I’m gonna make some plays.”

Other teams beware: the Predator is coming to a city near you. All this film is missing is Jesse Ventura saying, “I ain’t got time to bleed” or maybe we’ll settle for Horton picking off Tony Romo this weekend in Dallas. Either way, this has the makings of a classic.