campbell and the caps 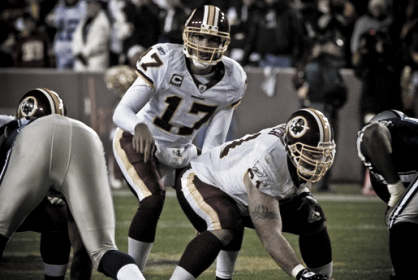 Last week we chatted with Washington Redskins quarterback Jason Campbell about his unlikely hockey fandom. A few days later, Washington Capitals owner Ted Leonsis followed our post up by inviting Campbell to come out and skate with the team. So we figured we should be the ones to let Campbell know about the owner’s gracious offer and see if he’d actually be willing to do it after his football season concluded.

“I might take that offer up,” he said. “They’d have to teach me how to skate though. I’ve never skated.”

They’ll take it easy on you your first time out there, right?

Can you hit them?

“If it’s the offseason, then I’m not supposed to be getting hit. I’m supposed to be recovering,” he said. “If I can’t stop and we just accidentally hit each other, then I’ll have to deal with it.”

From there, we figured we should ask a few of Campbell’s teammates what visions come to mind when picturing their franchise quarterback attempting to skate/play hockey for the first time in his life. Predictably, each player we talked to cracked up before actually attempting to answer the question.

“He’d be a goalie – because he probably can’t skate,” said tackle Jon Jansen, who knows a thing or two about cold weather sports having attended college at the University of Michigan. “I hope he does well. I hope he doesn’t hurt himself out there.”

Is he at least athletic enough to go out there and not embarrass himself?

We were greeted with more of the same confused looks and laughter as we headed to the other side of the locker room.

“Jason skating,” asked defensive tackle Anthony Montgomery with a laugh. “I can envision him falling a lot, man. If I had my way, I wouldn’t let him do it. That’s our starting quarterback and I don’t want to risk him getting injured.”

Let’s say we could get him out there and be guaranteed he’d get through it injury free. What kind of hockey player would Campbell be?

“Jason’s a real calm guy,” said Montgomery, who like Jansen, is familiar with cold weather sports thanks to his time at the University of Minnesota. “If he’s doing good or doing bad he’s got the same look on his face. I just don’t think he’d be aggressive enough [to play hockey]. Somebody smack him up against the glass or try to fight or something like that, I don’t think Jason would take part in that. I’m not saying he’s a coward or anything like that. Hockey’s just a real aggressive sport.”

Rounding out our informal poll of Redskins players, we figured we had to stop by the residential Canadian, kicker Shaun Suisham. On a hunch, we figured if anyone in the locker room knew hockey, it’d be Shazam. Turns out, we guessed right.

“I was at every home playoff game but one last season,” Suisham said. “I’ve really become a Capitals fan. I’ve only had the opportunity to get out to one game this year, but it’s a great game.”

What is it about the sport of hockey that appeals to you?

“I grew up playing hockey,” said Suisham, who manned the blueline as a defender back in the day. “I started skating at three. Football was kind of my ticket to school and all of that, but I played hockey all the way up until I left for football.”

Hypothetically speaking, what kind of hockey player would Jason Campbell be?

What advice would you give to Campbell if/when he gets out there?

“Hold onto the boards,” Suisham said.