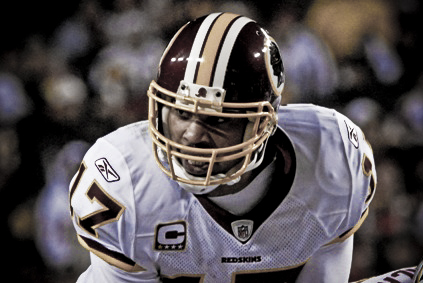 The Washington Capitals are good. And chances are, they’re going to be really good for a while. Their top four players – left wing Alex Ovechkin (23-years-old), left wing Alexander Semin (24), defenseman Mike Green (23) and center Nicklas Backstrom (20) – are young and seem poised to lead this team to heights D.C. has never seen.

After scoring an NHL-best 65 goals last season, Ovechkin won every conceivable award possible. He took home the Lester B. Pearson Award as the league’s most outstanding player (voted by the players), the Hart Memorial Trophy as the Most Valuable Player, the Art Ross Trophy and the Maurice “Rocket” Richard Trophy. Additionally, coach Bruce Boudreau took home the Jack Adams Award as the NHL’s top coach.

This season, Semin has managed to take his game to the next level – even managing to outplay fellow-Russian Ovechkin many nights early in the year. In just 16 games, Semin has scored 13 goals and 14 assists for 27 points. His wristshot is so nasty that it ranks among the best in all of professional hockey. Oh, and he became even more popular with locals when he decided to basically call Pittsburgh Penguins center Sidney “Cindy” Crosby overrated.

Pairing a motivated Semin with Oveckin, last season’s league MVP, as well as Green, the NHL’s top goal scoring defenseman and Backstrom, runner-up for rookie of the year, easily gives the Caps the most exciting offense in D.C. sports. And folks seem to be taking notice.

Maybe its due to the addition of the Red Rockers, but the Caps’ average attendance at the Verizon Center is over 17,700 (97 percent capacity) this season. (Quick sidenote on the Red Rockers link: can you say one of these things is not like the other?) And the team has rewarded those in attendance with the Caps undefeated (7-0-1) at home in regulation thus far this season. What’s more, even the other sports stars in town are “rocking the red” with the Caps this year.

Earlier this month, Redskins tight end Chris Cooley officially became a Caps fan after attending his first hockey game, a 3-1 Capitals victory over the New York Rangers. While Cooley is new to the hockey bandwagon, quarterback Jason Campbell is not.

The face of the franchise has been spotted at the Verizon Center enjoying Caps games for a couple seasons now, so we caught up with Campbell earlier this week to ask him how someone from Laurel, Mississippi becomes a hockey fan.

What is it about the Capitals and the game of hockey in general that appeals to you?

“I just like the intensity of it,” Campbell said. “It’s kind of like football, except its on skates. Guys are hitting each other and they’re playing hard and getting physical. It’s a tough game. You definitely respect the guys who play that game because it is so physical.”

Had you ever been to a hockey game before you came to D.C.?

What’s kind of cool for local fans is we’ve got guys like you going to Caps games and now we’ve got Ovechkin and some of his teammates showing up at FedEx Field. Have you had a chance to meet some of those guys and get to know them?

“Yeah, I know Ovechkin real well,” Campbell said. “I also know Ryan Zimmerman [of the Nationals] and a couple of the other guys in the area. I always know when they’re coming to our games and if I go to their games, I always see them before or after the game. We all try to get out and support each other. It’s definitely nice because we’re all in this city together. If we can all get on a winning track this city can really be live.”

What kind of hockey player would Jason Campbell be?

“I’d probably be a bad hockey player,” Campbell said with a laugh. “I’d probably have to be a goalie or something.”

Goalie is probably a bad place for you to start then. If someone like Ovie fires a 100 mile an hour shot at you, its probably not going to end well.

“I know, right,” he said. “I’ll probably just have to stick with football.”

Dear Ted Leonsis, if you’re as smart as we think you are, you’ll immediately invite Campbell out to Kettler IcePlex or the Verizon Center to skate with Ovechkin and friends. You don’t have to put him in net, but this is an opportunity too good to pass up.

[Update: Capitals owner Ted Leonsis has taken our advice and extended an offer to Campbell to come out to skate with his team. Here’s hoping Jason won’t be available to do so until after a deep playoff run.]