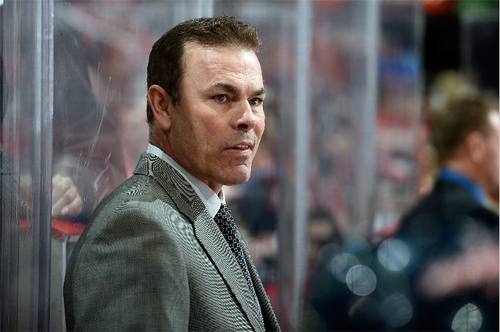 Some of you might remember, I was more than a bit skeptical when the Washington Capitals announced the hiring of Adam Oates as the franchise’s 16th coach.

Sure, he was a Hall of Fame player who spent a solid chunk of his career playing for the Caps, but that doesn’t guarantee he’ll be any good as a first-time coach taking on this perennial underachiever of a hockey team.

You might also recall, I was one of the first people out there to try and lower expectations for the 2013 season.

While many local diehards were just happy to have the sport back in their lives after a lengthy lockout, I saw a brand-new coach trying to implement a radically-different system overnight to a roster full of players who may or may not have been in playing shape and wasn’t really sure it could all come together quickly enough to be competitive during this abbreviated season.

And yet, I take absolutely no satisfaction in seeing the writing on the wall from day one. It goes without saying I’d much rather look like a fool for questioning the Oates hiring or going on record as saying I didn’t think this team was going to make the playoffs in 2013, but that doesn’t appear to be an option at the moment.

So right about now, I’m doing my best to try and keep folks from hurting themselves as they jump off the bandwagon as quickly as possible.

Look, I get it. As soon as the puck dropped and the season was officially underway, it was clear these Capitals were off. Regardless of why they weren’t playing well, it was readily apparent that this season was going to be, at best, a work in progress and, at worst, a complete clusterfuck.

With 10 games on the books, the Capitals have played 20 percent of their schedule. They have a league-low five points and look completely incapable of playing a full 60-minutes of hockey in a single night.

This Caps team has no identity. They have no calling card. They excel at nothing.

Whether you’re talking about the offense, defense or goaltending, these players underwhelm in every aspect of the game.

I firmly believe that teams take on the traits of their captains/best players, and it looks as though that’s the case in Washington this season.

Forward Alex Ovechkin was once the toast of the league. He was a dynamic player who was capable of the unthinkable seemingly every time he took to the ice. His in-your-face style of play was so breathtaking that even casual sports fans tuned in to watch him in action.

But those days are long gone and it’s foolish to think they’ll ever return. Sure, it’s within reason to think that the two-time league MVP is capable of playing at an all star level once again, but don’t assume for a minute that will definitely be the case.

That’s because, these days, both Ovechkin and the Capitals vanish for lengthy stretches during a game. He might be one of the league’s highest-paid players and one of the most easily-identifiable faces, but his level of play is much closer to the Washington Wizards-era Michael Jordan than the M.J. who made the Chicago Bulls a dynasty.

If you catch Ovechkin on a good night and the conditions are perfect, he’s still capable of getting the red-clad fans at the Verizon Center out of their seat. But more times than not, he’s content to try that same old, tired move — weaving in and out as he ambles down the left wing before either losing the puck as it bounces off his stick (which happens with alarming frequency this year) or firing a sad shot off the defenders shin guard.

The entire offense is built around Ovechkin, which wouldn’t be a problem if he was still Ovechkin. But the face of the franchise has just two goals and three assists through 10 games, which is why the Capitals have become a doormat at just 2-7-1.

As the captain goes, so too does the franchise.

For better or worse, the Caps are only as strong as their highest-paid link, which wouldn’t be such an issue if he hadn’t become the NHL’s biggest disappointment in hockey over the last couples seasons.

This team is getting decent production from several of the role players — with guys like Joel Ward, Matt Hendricks and Troy Brouwer giving their best effort night in and night out. But the only way the Capitals are going to be competitive on a nightly basis is if Ovechkin resembles their best player.

Right now, the Caps look like the Bruce Boudreau era defense coupled with the Dale Hunter era offense. Put another way, they’re pitiful on defense and inept on offense. That’s not something I put on Oates.

He may or may not be a good coach at the NHL level. It’s safe to say it’s going to take more than 10 games to come to that decision. But if Oates is going to have a fighting chance of succeeding in Washington, he’s going to need his best player to actually be his best player.