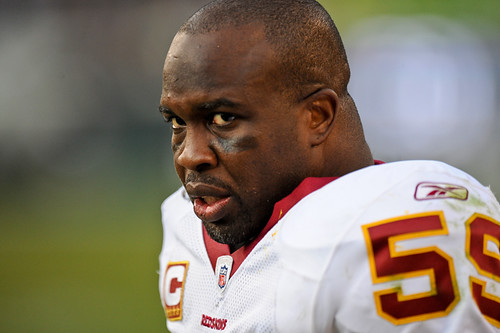 Washington Redskins middle linebacker London Fletcher has been unable to practice this week and suffering a hamstring injury during the team’s 27-23 loss to the New York Giants.

The injury was serious enough that the Pro Bowler watched a good chunk of the back-and-forth battle from the sidelines and now there’s talk that he might not be able to play when the Redskins travel to Pittsburgh to face the Steelers this weekend.

That, of course, is newsworthy considering Fletcher has played in 231 consecutive games. During a press conference yesterday, Redskins head coach Mike Shanahan informed the media that the 37-year-old team captain is not only dealing with the hamstring injury, but also a balance issue as well.

“He’s having some problems with his balance and so he is going to talk to Dr. [Anthony] Casolaro,” Shanahan said. “He did talk to him Monday evening when he came in later on that day or he said something to me that day. He was a little more specific come Tuesday, but I‘m hoping it is nothing very serious, but that is why he is talking to Dr. Casolaro and a neurologist to find out why he is having a little problem with his balance.”

Until they know if he’ll be able to play this weekend or not, Washington’s already suspect defense must now prepare for this weekend’s match-up without Fletcher.

“I don’t think London Fletcher is going to break his streak,” said Pittsburgh quarterback Ben Roethlisberger. “Doesn’t he have 270 [consecutive games played] or something going? Some kind of crazy number. I don’t foresee that –- him missing a game –- so I’m not even preparing without him.”

For 15 seasons now, Fletcher has been there each and every Sunday, quarterbacking his defense. That’s why it’s so tough to envision the Redskins playing a game without him.

“I’m not a betting man, but I think he’ll be out there,” said quarterback Robert Griffin III.

It’s understandable Griffin would feel that way. After all, the last time Fletcher missed a game, RGIII was just eight years old.

Fletcher wasn’t exactly in a talkative mood yesterday. But he is on record as saying it would take more than just a minor bump or bruise to see him sit a game out.

“If I feel I can go out and help the team win, then I’m gonna do my all to be out there and play,” Fletcher added.

So while it might not look good for Fletcher today, I’d still side with Griffin and Roethlisberger and guess that he’s in the lineup when the Redskins’ defense takes the field. If not, someone better have a hospital bed delivered to Redskins Park in a hurry.