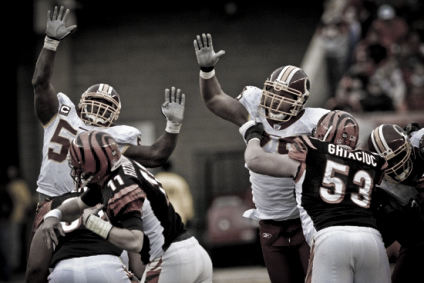 Raise your hand if you think London Fletcher should have made the Pro Bowl.

Of course, if we know Fletcher as well as we think we do, there’s no way he was wearing anything flashy. That’s simply not his style, which is probably why the 11-year veteran has never received a Pro Bowl nod.

While it’s true that the NFL’s version of an all-star game is completely irrelevant, it still would have been nice to see Fletcher finally get the recognition he deserves. Since the first moment he arrived in D.C., Fletcher has been the heart and soul of this defense (which, by the way, is routinely ranked in the top 10 in the league).

Even though he’s been dealing with a foot injury for some time now, there’s zero chance of Fletcher actually missing a game … or even a play. Don’t take our word for it, listen to Fletcher’s boss.

In the violent world of the NFL, where everybody is banged up to some extent during the season, Fletcher is always there. In fact, Fletcher has played in 133 consecutive games and you better believe he takes that streak seriously.

”If I feel I can go out and help the team win, then I’m gonna do my all to be out there and play,” Fletcher said.

Not to take anything away from the four Redskins players – running back Clinton Portis, fullback Mike Sellers, tight end Chris Cooley and tackle Chris Samuels – who were voted to the Pro Bowl, but if only one person from the burgundy and gold was sent to Hawaii, it should be Fletcher.

He’s currently got 118 tackles, which is fifth best in the NFL. But more importantly, he’s the one player on the entire Redskins roster they can’t afford to play without. Even during this recent losing streak, when more than a few people are wondering which Redskins players have given up on the season, Fletcher refuses to mail it in. While still dealing with a lingering foot issue, he’s managed to rack up 32 tackles in the last three games. If that doesn’t show the true type of player he is, then nothing will.

And besides, one of the guys who got the nod ahead of Fletcher, San Francisco linebacker Patrick Willis is listed as an outside linebacker on NFL.com. How is he getting voted to one of the inside/middle linebacker slots over London? And do we need to mention that four players from the anemic Redskins offense made the Pro Bowl, but not one player from the team’s perennial top-10 defense was chosen?

We don’t want to make personal attacks on Willis or anyone else that made the Pro Bowl roster. The purpose of this post is simply to say that if ever there was someone who truly deserved to be honored for his talented and dedication, it’s London. He’s much too classy to make a big deal out of the snub, which is why we felt compelled to speak on his behalf. Frankly, this entire ordeal is making us sick to our stomach.

Update: David Elfin of The Washington Times has some awesome quotes from London Fletcher in response to being snubbed by his peers. Here’s an sample:

“I don’t know if it was because I wasn’t a first-round draft pick, I don’t do some kind of dance when I make a 10-yard tackle, I don’t go out and get arrested. I believe in playing the game the way it’s supposed to be played,” Fletcher told Elfin.