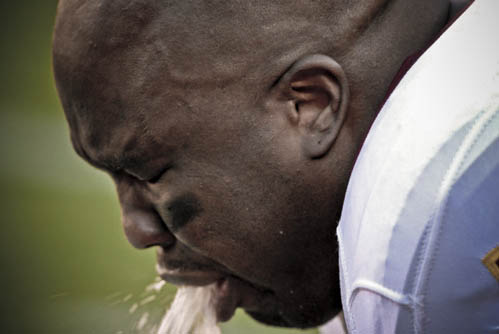 Apologies are due up front, with the lack of action on the blog this week. We’ve been sick all week long (which makes the above photo even more appropriate) and haven’t had much in the way of energy to dedicate to the blog. While Homer McFanboy has been home resting, Dan Steinberg has been getting it done, folks. This week he even managed to tackle a topic that we planned on pursuing this week — middle linebacker London Fletcher’s pre-game ritual of … um … losing his lunch.

Fletcher never puked before a game in college, but has been doing throughout his NFL career. He’s not sure what triggered it once he turned pro, but he attributes it to anxiety and nerves.

“By the time it’s game day,” he said, “my stomach’s just so queasy, so to speak, that I have to get out some things before the start of the game.”

Click here for Dan’s full article, if you have the stomach for it.