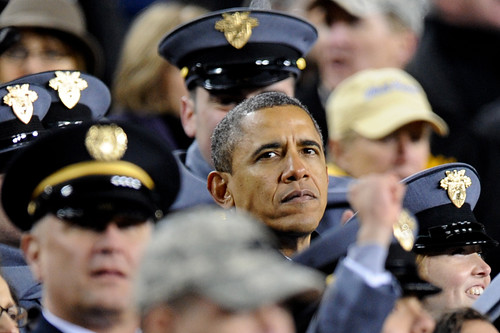 Sure, Barack Obama might have plenty on his plate these days — with a presidential election right around the corner and everything — but that doesn’t mean he can’t pause for a moment to admire greatness.

Obama is an avowed Bears and Chicago White Sox fan, but he has spent a lot of time over the summer praising the Washington Nationals and their young phenom Bryce Harper.

Now, longtime readers of this site might remember that last season, I boldly predicted that the president would be in attendance for Washington’s season opener against the New York Giants at FedEx Field, Sept. 11.

Something about Washington, D.C. and New York being represented on the 10th anniversary of 9/11 had me convinced Mr. President would at least make a cameo at the game, but alas, while former secretary of state Colin Powell was in attendance, Obama was not.

But maybe this year is different. Obama is a passionate Chicago sports fan, so maybe the thought of sitting through one more game that prominently involved Rex Grossman was too much for him to handle. Maybe he believed there were more appropriate places to pay his respects on that day.

Whatever the case, it’s safe to say that this year is different. For starters, it is an election year and the Redskins have been known to decide an election or two. Because the Redskins have corrected predicted 18 of the last 19 elections (that’s 94.7 percent accuracy, boys and girls), Obama would be wise to free up his schedule for the Redskins versus Carolina Panthers game, Nov. 4.

History shows a win for the burgundy and gold during their final home game before the election equals a win for whichever party holds the White House. So unless he feels like packing up his belongings and updating his resume, Obama would be wise to continue to support RGIII and friends.

[Editor’s note: The photo at the top of this post was captured during last year’s Army-Navy game at FedEx Field, so, if nothing else, the president at least knows the stadium exists.]