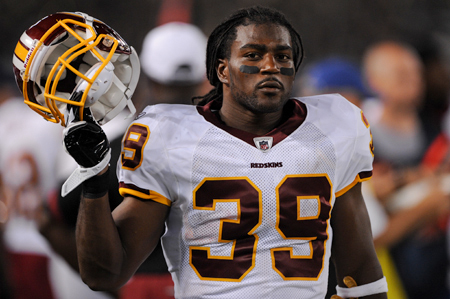 Before the start of each season, I like to put my money where my mouth is and do my best to forecast what’s in store for the Washington Redskins. Sometimes I look like a genius (Albert Haynesworth equals disappointment). Other times … not so much. (Carlos Rogers setting a career high in interceptions? Wow. Let’s move on.)

But the point of this exercise is to take a few swings for the fences. You know, go big or go home. Or something. With that in mind, I present to you my 10 (semi-) bold predictions for the 2011 season.

1. Rex Grossman has exactly four games to show what he’s got.

The Redskins first four games are against the New York Giants (decimated by injuries), Arizona Cardinals (rebuilding for the 24th straight year), at the Dallas Cowboys (no offensive line and a defense in transition) and at the St. Louis Rams (dangerous, but still unproven).

Grossman needs to have Washington at least 2-2 heading into the bye week or he might find himself riding the bench as if his name was Donovan McNabb. That’s because the Redskins come out of the bye week against Philadelphia (never a fun game) and then play four games in a row against beatable opponents — Carolina, Buffalo, San Francisco and Miami.

Because their December schedule is so brutal, the Redskins need to win early and often this season if there’s any chance of … well … never mind.

Let’s just say Grossman needs to come out of the gate fast and furious or John Beck will be back in our lives in no time.

2. The Tim Hightower trade makes it all better.

For years, it was automatically assumed that if the Redskins made a trade, they got the short end of the stick. Even when the acquired legitimate talent, like, for example, running back Clinton Portis from Denver, it came at the expense of Pro Bowl cornerback Champ Bailey and a second-round draft pick.

Other times, they gave up high draft picks for players like McNabb, Brandon Lloyd, T.J. Duckett (and so on) and got nothing but a swift kick in the beanbag in return. But this offseason has been different.

It started with a trade that brought receiver Jabar Gaffney to Washington from Denver for seldom used Jeremy Jarmon, who was later cut by the Broncos.*

Then the Redskins somehow convinced Arizona to trade away Hightower for 35-year-old Vonnie Holiday, who is a nice guy, but wasn’t going to make the 53-man roster. The trade was so lopsided that my initial reaction was that Capitals general manager George McPhee was somehow involved.

If Hightower is half as good in the regular season as he’s been in the preseason, the ‘Skins fans will be smiling about this acquisition for a long, long time.

3. The line is no longer offensive.

In other words, two tackles and three duds.

Mercifully, the three interior linemen are someone else’s problem now and Shanahan has turned to 26-year-old Kory Lichtensteiger, 28-year-old Will Montgomery and 28-year-old Chris Chester.

Lichtensteiger, a former fourth-round draft pick by the Broncos, started 14 games last season, while Montgomery, the strongest Redskin on the roster, started six games in 2010. Both showed flashes of promise and if Chester can prove to be an upgrade over Hicks, who never really worked in Washington, the offensive line could very well be the best in the NFC East.

Of course, there’s absolutely no depth if anyone gets injured, but that’s a topic for another day.

4. The ground game is back in business.

Shanahan has 24 years of experience coaching in the NFL. In 17 of those seasons, his team’s have finished in the top 10 in the league in rushing.

Statistically speaking, the Redskins are basically a lock to make huge strides after ranking 30th in 2010 just because Shanahan is still running the show.

Add in Hightower (not to mention rookie Roy Helu and last year’s workhorse Ryan Torain) and the revamped offensive line and I feel comfortable predicting big things for the rushing attack in 2011.

No, he’s not going to become a two-sport star by playing for the Kansas City Royals in the offseason. I see similarities between Jackson and Landry in a different way – and if I’m being honest, it’s not a good thing.

Jackson was so big and muscular, that there really was no such thing as a minor injury. And once he got nicked up, Jackson had trouble with nagging little injuries that prevented him from ever truly reaching his potential.

As often as Landry has been sidelined since he came to Washington … let’s just say I hope I’m wrong about this one.

6. Shayne Graham might be the team’s special team MVP.

Redskins kicker Graham Gano was the least accurate kicker in football in 2010. That’s what happens when you miss 11 of 35 attempts in a season.

In related news, the front office brought in Graham, the third most accurate kicker today, to push the 24-year-old this offseason. Well, it worked.

Gano converted all 10 of his attempts in the preseason and has everyone involved feeling much more confident. So even though Graham looked awful in his single outing in Washington, his signing could definitely have a lasting effect for the burgundy and gold.

7. Rocky McIntosh is the weak link on defense.

The stats would have you believe that McIntosh is a stud on the Redskins defense — with his 378 tackles over the last four seasons (which comes out to 94 tackles a season).

The problem is, games aren’t played on paper.

Too often, McIntosh rushes in for a would-be tackle, only to end up on his backside while the ball carrier picks up another five or 10 yards. The other Redskins defender opposing teams love to target was safety Kareem Moore, who was also known for sloppy form and taking bad angles.

Injuries and the addition of safety Oshiomogho Atogwe limits the damage Moore can do this season, so that leaves just McIntosh.

8. President Barack Obama will attend a Redskins game in 2011.

The Redskins already announced Colin Powell, the former secretary of state, will serve as an honorary captain for the season opener Sept. 11. Is it a stretch to believe that Obama, a notoriously diehard sports fan, will also make a cameo at FedEx Field Sunday?

Redskins owner Daniel Snyder has gotten everyone from Tom Cruise to LeBron James to take in a Redskins game, so I’m convinced he can find a way to somehow convince the leader of the free world to sneak away from his day job for a few hours to take in the burgundy and gold. Besides, the president can bypass the awful traffic gameday patrons suffer through simply by utilizing Andrews Air Force Base, which is right up the road from Raljon.

I mean, if The Danny can’t get Obama to attend a Redskins game on Sept. 11th in the name of patriotism, then there’s something wrong with this picture. I mean, the guy found time to take in a Mystics game. For that reason alone, I don’t think it should be a tough sell to get him to show up for the biggest ticket in town.

Okay, not really. But the fact that Cerrato has openly admitted he could have sent the third-round pick used on Barnes in 2009 to Kansas City for stud running back Jamaal Charles makes me incredibly sad. Even with the addition of Hightower, it’s tough for me to not hold it against Barnes that he’s here instead of a 24-year-old who rushed for more than 1,400 yards last year.

10. This year will be different. No really.

Each of the last two seasons the Redskins have had the oldest team in football. Thankfully, that’s not the case anymore. With an average age of 27, a youth movement has finally made its way to Redskins Park and ‘Skins fans finally have a reason for optimism.

Look at it this way — even if the Redskins go 6-10 for a second-straight season, they’ll do so with a much younger roster and with a roster comprised primarily of players Shanahan and friends specifically targeted for this system.

I would even argue that the Redskins have improved at every single position across the board over the last year. The only area even up for debate is quarterback, but McNabb was so pitiful last season that even a mediocre season by the Grossman/Beck combo would be an upgrade.

So sit back and enjoy the ride, ‘Skins fans. For the first time in recent history, the only storyline in Washington takes place on the field. That alone is enough to bring tears of joy to even the most pessimistic of fans.

And if all else fails, at least Ben’s Chili Bowl is now available at FedEx Field.