getting to know ryan grant 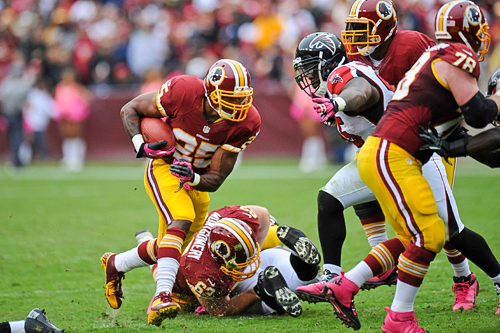 Earlier this week I wrote a feature story on Washington Redskins rookie running back Alfred Morris, who went from unheralded sixth-round pick to one of the most productive backs in football seemingly overnight.

While head coach Mike Shanahan is famous for rotating his running backs, Morris has done everything within his power to show the coaching staff he’s more than capable of shouldering the workload.

That being said, there is a new running back in town and his resume is fairly impressive.

Even though the Green Bay Packers offense is known for airing it out more than anything, veteran running back Ryan Grant ran for more than 4,000 yards and 25 touchdowns during his five seasons there.

“I’ve always been a fan of Ryan Grant,” Shanahan said. “I think he runs the zone scheme really well in the years that he had, especially earlier on when he was getting the ball a lot. He was very good at pressing it, stretching it, getting downhill and running hard and breaking arm tackles. I think he’s a violent runner who gets the ball downhill and moves the chains. He’s always been a good zone runner. That’s what Green Bay has pretty much majored in, similar to us. Everybody runs a zone. It’s a little bit different, so you can’t say it’s the exact same, but he’s familiar with what we’re doing. I think it suits his skills.”

With Roy Helu Jr. done for the year and Evan Royster fighting through injuries as well, the Redskins made the move to strengthen the backfield by signing Grant to a one-year deal.

“I think he fits with what we do,” said Shanahan. “He is big and fast and he has some experience. He is a very sharp kid who picks things up very quickly. At this time of the year, you need guys who have a little bit of experience. Mentally, they are pretty sharp. They have been around football organizations similar to ours relative to the running game. I think he is a guy in a couple weeks’ time probably could learn the system fairly quickly and help us.”

After being inactive for Washington’s game against the Tampa Bay Buccaneers, Grant was in the lineup this past weekend against the Atlanta Falcons. He carried the ball just once — a five-yard gain — but was still willing and able to help his new team out in any way possible.

“I’m a slasher, a downhill kind of runner,” Grant said. “I’m a big back that can break tackles, get north and south easily and break big plays off. I think I can also bring my veteran leadership. Alfred is doing an awesome job, so during the game I’m just trying to help him to pick up on little things here and there that younger guys, awareness wise, might not pick up on yet.”

After being the starting back in Green Bay for five seasons, I asked Grant how much of an adjustment it was to be searching for employment as the 2012 season began.

Interestingly enough, there were several teams vying for Grant’s services when he ultimately opted to sign with the Redskins.

“Yeah, when it all went down I was in Chicago and I was just in Detroit the week before,” Grant said. “Fortunately I had some options and I felt like Washington was the best place for me. It was a combination of things. I like what Coach Shanahan does as a coach. I like the organization and, of course, I like the offense that they run. I like RGIII is extremely talented along with the rest of the guys on this offense, I think they’ve got something good that I can help out with. I think this team could be something special.”

How long does it take a veteran like Grant to walk in the door with a new team and learn a new offense? Were the systems similar enough that it was mainly learning new terminology or was there much more involved?

“It was a little different, but I’ve been playing football for a long time,” he said. “Some things correlate, some things are the same and some things are completely different, but being a pro, I understand football. When you get the concepts it makes everything a lot easier. That’s the biggest thing — that they trust me and the players trust me out there. I think that I’ve shown I’m a professional in how I handle myself and I just try to take care of business.”

While there will always be a healthy competition between players as they compete for playing time, it’s clear from listening to Grant talk about Morris that he’s already a fan of the rookie.

“I think he’s running phenomenal,” he said. “His biggest thing is he’s breaking tackles and he’s making the first guy miss, which is an awesome talent for a running back. He’s making big plays, he’s running hard and you can’t really ask for anything more from him — especially being such a young back. He’s just going to continue to get better. The biggest thing for me with him is to help him make sure he does the little things on the field — like pass protection or making sure he’s not taking the extra hit when it’s not necessary or helping him read things before the snap on certain plays. I can help him with a lot of those different things.”

Grant seems to have a good head on his shoulders, and is saying all of the right things about trying to help the Redskins win — even when he’s not seeing much in the way of playing time. If his biggest contribution to this organization is helping Morris become a more well-rounded player, then his signing will still have been a complete success. And if he is able to get on the field more often and is able to contribute on the field as well … that would be a bonus.