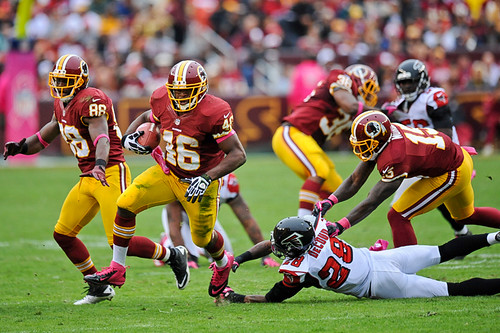 [Editor’s note: This season, the Washington Redskins have asked me to occasionally write feature stories for the team’s official website, Redskins.com. This article is my first contribution, so please check it out.]

No rookie has had a more improbable start to his professional career this season than Washington Redskins running back Alfred Morris.

Seemingly overnight, the unheralded Florida Atlantic product went from fighting for a roster spot during training camp to becoming one of the most productive ball carriers in football.

But if there is anyone who has the right mindset to handle this newfound attention and publicity, it’s arguably Morris thanks to his upbringing.

The Pensacola, Florida, native was one of seven boys growing up, which he admits kept things very competitive.

“We all loved each other, but we would compete over everything. It was just part of our nature,” he said. “You couldn’t pay us to stay inside. We’d always be outside playing basketball, playing foursquare, playing football or running through the woods. We were always playing something and always competing. If you were an only child, man, I feel sorry for you. You missed out on a lot of good times with siblings.”

While he’s always been competitive, Morris believes there is a time and a place for that mindset.

“On the football field or when I’m playing a game, I’m a competitor,” he said. “But at the same time, I have a heart for other people. Like if I’m playing someone in Madden and I know I can beat this person, I’ll run a few bad plays or something to keep them in the game and make them feel better. I’ve just always been that way. I’d much rather make someone smile or lift their spirits up than just beat someone.”

Local fans were thrilled to learn that Morris grew up rooting for the burgundy and gold as well. But how does a 23-year-old from Florida end up supporting the Redskins?

Well, when Washington acquired running back Clinton Portis from Mike Shanahan’s Denver Broncos, not only did they land one of the most productive rushers in franchise history – they also gained a new fan.

“I took a liking to the Broncos and the talented running backs they had,” Morris said. “And I really liked Clinton Portis because he had done such a good job for them, so when they traded him for [cornerback] Champ Bailey, I just followed him to Washington.”

Which makes it all the more impressive that Morris would go on to one day play for Shanahan as a member of the Redskins.

When Morris was selected by Washington in the sixth round (173rd overall), he was the 12th running back taken in the 2012 NFL Draft. And yet, after five games, Morris ranks fourth in the league with 491 rushing yards and is tied for second in the NFL with four rushing touchdowns.

“Most of the players who are successful under Coach Shanahan are free agents and low-round picks,” said fullback Darrel Young. “It just goes to show that if you play hard, it doesn’t matter where you’re drafted.”

That sentiment has served Morris well during his brief time in Washington. Rather than worrying about who was drafted ahead of him or which teams passed him up, he’s simply chosen to focus on becoming the best running back he can be.

While Morris knows he took a roundabout way to get to the NFL, he is quick to say he wouldn’t change a thing about his journey.