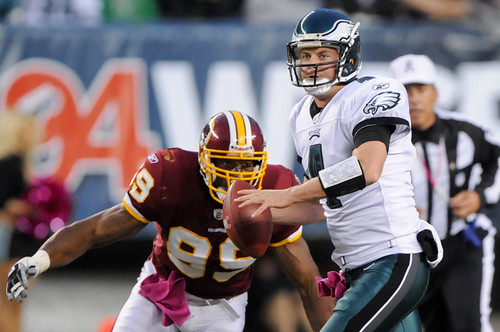 First of all, it was great to see one of the most down-to-earth guys in the NFL get another chance after the 33-year-old finished last season on the shelf with a quad injury. But it was even more enjoyable for me because of the team that signed Carter.

That’s because the last time the Redskins played in Oakland was one of the most memorable and enjoyable games I’ve had the pleasure of covering.

The 2009 season was winding down and the writing was on the wall for lame-duck coach Jim Zorn, but the guys in maroon and black came to play inspired football on that day.

Maybe it was because they had knocked starter Bruce Gradkowski out of the lineup, which forced the Raiders to trot out JaMarcus Russell as their quarterback, or maybe it was just their day, but the Redskins defense imposed their will all game long in a 34-13 rout.

The dynamic duo of Brian Orakpo and Carter combined for six sacks that day — four of which came courtesy of Orakpo who tied a team record. But the play that remains fresh in my mind all these years later involves Carter’s failed attempt to secure a fumbled football for what would have been the first touchdown of his career.

Please indulge me this trip down memory lane as I look back at one of my absolute favorite moments covering this team over the last eight seasons. Here’s what I wrote about that highly-entertaining play in the days following that game:

And that’s why I enjoyed that moment so much. Carter is a guy who racked up 34 sacks during his highly-productive five seasons in Washington. He was a well-respected veteran who provided great leadership to young players and was always willing to answer tough questions after a tough loss. He was a freak of nature with only three percent body fat, even though he was more than 250 lbs.

But watching him try to reel in that fumble in Oakland showed a human side to him that I’ll never forget. He absolutely looked like an excited kid on Christmas morning as he saw that ball just lying there and began envisioning the first touchdown of his career.

Even though he didn’t recover the loose ball, that’s still my favorite play of Carter’s time in Washington. It’s also why I hope he goes to the Raiders and picks up where he left off last season — don’t forget he earned a trip to the Pro Bowl with 10 sacks for New England before suffering that quad injury.

So best of luck in Oakland, Mr. Carter. If nothing else, maybe you can finally score that defensive touchdown we’ve all been waiting on.