stephen bowen wants to be crazy 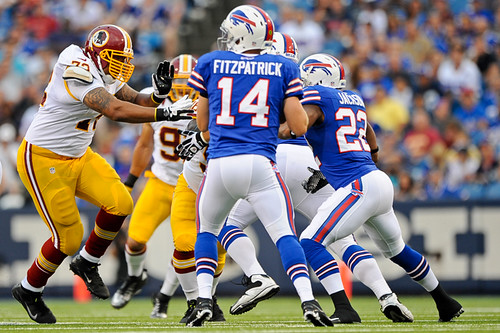 Just last week, Washington Redskins defensive end Stephen Bowen shared with me his plans to dominate the NFL during the 2012 season.

Even after setting a career high in sacks last season, Bowen believes there’s still plenty of room for improvement in his game and isn’t shy about sharing his lofty expectations for the upcoming season.

While Bowen’s name didn’t show up on the stat sheet during his limited playing time in Washington’s preseason opener against the Buffalo Bills, the seven-year veteran was still impossible to miss out there on the field.

That’s because he debuted a brand-new face mask that looks like it belongs on a movie villain in Predator or Total Recall, rather than on the gridiron.

Once the game had concluded and the Redskins emerged victorious, I felt it was duty to track down Bowen and see why on earth he opted to rock the six-bar face mask and if this was a one-time ordeal or not.

So, I’m standing on the sidelines minding my own business and then I look up and see you with this ridiculous face mask on your helmet and I’m trying to figure out what’s really going on. Are you trying to be like Justin Tuck and the New York Giants or what?

(Laughs.) “Nah, man,” Bowen said. “I just liked it and wanted to change my look up a little bit. I thought it looked nice.”

All I’m saying is — if it wasn’t for the name and number on your jersey, I don’t think any of us would have been able to confirm it was you out there …

“I know, I know. Everyone tells me I look a little crazy with it on there, but I want to be crazy out there on the field,” he said, still laughing. “It’s not like I’m trying to intimidate anyone with it — because I feel like I already had that factor before the new face mask. I was intimidating before I made the switch.”

So is this something you’re trying out for the preseason to see if you like it?

“I’ve been wearing it throughout training camp, so I’m just gonna stick with it,” Bowen said.

Okay, taking the new face mask and everything into consideration, how did you and the rest of the starters do against Buffalo’s starting offense in the opener?

“I think we did pretty good,” he said. “We got off to a little bit of a slow start on offense and as far as our defense … they were going with a bunch of empty sets and stuff, so our defensive line didn’t get much work because they were getting rid of the ball so fast. But they had a lot of three-and-outs and we gave our offense a lot more opportunities.”

And then once your night was over, the back-ups had a chance to come in and show what they’re made of. Talk to me about that goal-line stand they put together.

“I think that was amazing, man,” Bowen said. “That’s what we need — no drop-off on defense at any position. That’s what’s going to get it done for us this season. When an offense is that close and can’t score, that’s just demoralizing to them.

Did you seriously just try to use a football cliche on me? I thought we were better than that …

How do you pass the time during a boring preseason game once you know you’re night is over?

“I try to take mental reps and stay into it a little bit to help the guys if I see something out there with an offensive lineman or something,” he said. “I try to stay involved with the game they best I can.”