stephen bowen plans to dominate in 2012 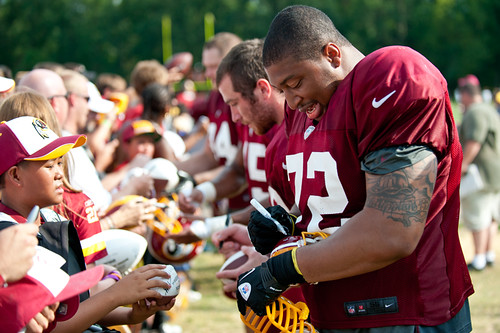 When it comes to pass rushers on the Washington Redskins, the first two names that come to mind are linebackers Brian Orakpo and Ryan Kerrigan.

In 2011, Orakpo led the burgundy and gold with nine sacks and Kerrigan finished second on the team with 7.5.

But it’s the third name on that list that might come as a bit of a surprise to some — defensive end Stephen Bowen.

While he’s not as flashy or publicized as the two pass rushers listed above, Bowen finished last season with six sacks. That’s especially noteworthy because from 2006-10, Bowen registered just 5.5 sacks in 63 games played for the Dallas Cowboys.

“It wasn’t a surprise to me, I thought he was the best defensive lineman on the [Dallas’] football team and that’s why we went out and got him,” said head coach Mike Shanahan last Thursday. “He didn’t disappoint me last year at all. He gets one-on-one match-ups and does a great job. I think he’s doing a very good this year, coming off the knee [injury], coming off the surgery. I don’t think it’s 100 percent yet. That’s one of the reasons why we gave him a day off yesterday. But he will be there. He is a guy that plays hurt and he’s very consistent.”

Seeing the Redskins steal a player from their hated rival and then watching him take his game to another level is a dream come true for many ‘Skins fans, so I decided to catch up with the 28-year old to see how everything is coming along as he rehabs his knee and prepares for his second season in Washington.

So what’s the story with your knee? When did you injure it and how’s everything coming along?

“Last season, I tore my PCL,” Bowen said. “I tried to rehab it first, but it still wasn’t acting right so they went in there and just cleaned out some loose cartilage. But I’ve been working hard the whole time and my knee is feeling strong. I’m feeling good now.”

Earlier this offseason, you were relegated to the sidelines while your teammates were going through OTAs and everything. How good does it feel to finally be able to get back on the practice field?

“It feels great to be back with the team, man,” he said. “When you’re standing around watching and stuff, you feel like you’re not putting forth an effort. You see those guys putting in that hard work and you just want to be a part of it with them. Now, everybody is working hard and I’m in the grind with the defensive line, so it feels great.”

How much more familiar are you with everything this year compared to last season? Is life much easier now that you’ve been around a while?

“It’s great,” said Bowen. “We had a chance to play together last year and jell together. This year we’re just going to play with a lot more confidence, understanding the scheme and also being together every day. We all are like a family. The D-line are like brothers. It’s great. I’m looking forward to it.”

Of course, last offseason you also had to deal with a difficult family situation. I’m guessing you’re happy to have a much quieter offseason the second time around, right?

“Last year was just crazy when I lost my son and my other son was in the hospital and coming here right when the lockout ended, everything was just a blur,” Bowen said. “This year, everything has been relaxing and I have just been enjoying my family and really being able to focus.”

If you ask me, the front seven is not only the strength of this defense, but it’s the best strongest area of this entire football team. What say you?

“I believe so,” Bowen said. “I don’t believe we have a weak chain in the link. Everybody can play and I just feel like we’re really gonna dominate this year.”

And as far as the defensive line goes, the only change this year seems to be the return of Jarvis Jenkins. How important is something like continuity for a defensive line?

“I think it’s great,” he said. “I will say I don’t like guarantees. When you see teams like the Steelers, they keep the same D-line, outside linebackers and inside linebackers for years. That’s the way you become great. When you move guys in and out, it’s hard to have chemistry going.”

Last year you set a career high in sacks, so what can we expect for an encore in year two?

That’s all fine and good, but if you want people to take you seriously, aren’t you going to have to come up with a legitimate sack dance?

(Laughs). “You know, I really do, man,” Bowen said. “I’ve been working on it this offseason and I’m trying to think of new ideas. But I promise, it’s coming. It’s coming. I’m gonna think of something.”

I try not to think about it much, but before you came to town, you played for the Dallas Cowboys. Do those losses sting a little more than other ones because that’s your former team?

“Yeah they do,” he said. “Those guys over there, I played with them for a long time, but once we got on the field, it’s competitive. I wanted to win so bad. It has been eating me up all year. I’m definitely looking forward to Thanksgiving.”

What’s the biggest difference between your role in Dallas and what they ask of you here in Washington?

“In Dallas, we pretty much split the reps,” said Bowen. “I was mainly a third-down guy. I played first and second too, but mainly third down. Here the workload is mainly on me. I take full responsibility for it and I like having the pressure.”

With your increased role, have you switched up your technique or anything like that?

“No, I think just sharpening up the way we play on blocks in this scheme is a little different,” Bowen said. “It took me a little while during camp but now it is starting to become second nature.”

What have you seen from that rookie quarterback so far in camp? He’s gotten plenty of hype since he came to town. Is he worth all of this attention or what?

“Oh, man. You just never know what you’re gonna get from him — he’s such an amazing talent,” he said. “He can run the ball. He can throw the ball. He’s very accurate, very intelligent and very humble. He fits in right with us and everybody is going to rally behind him. He jokes with the guys and everything, but you can tell he’s very disciplined. That’s what we need at quarterback if we’re going to be great.”

Local fans are understandably excited, but my question for you is just how much pressure should people being putting on Robert Griffin III? After all, he is still a rookie.

“He is a great talent, but rookie or not, you can’t put it all on the quarterback,” Bowen said. “He’s just one player, so other guys on this team have to elevate their game and we have to be good on offense, defense and special teams so it makes it easier on him.”

What has to happen this year for the Redskins to finally turn the corner and be competitive with the big boys?

Did you just throw football cliches at me, man? Come on, now. I thought we were better than that.

“I mean, I’m a defensive guy, so I’m not going to put it on the special teams or offense,” Bowen said. “I’m going to say it’s all on the defense. They say that ‘offense wins games and defense wins championships,’ so if we play great football on defense, we’re gonna be great.”

And what can we expect from Orakpo and Kerrigan this season?

“Oh, definitely double digits sacks from each of them this year,” he said. “Definitely.”