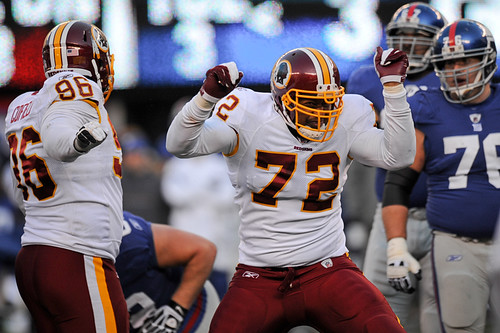 True story – the first thought that went through the head of Washington Redskins defensive lineman Stephen Bowen after he sacked New York Giants quarterback Eli Manning this past Sunday was about me.

Why on earth, you ask, would a veteran defensive end such as Bowen think of me after registering his sixth quarterback sack of the season? Let me explain.

This story starts three weeks ago, when Bowen and I were chatting in the post-game locker room after Washington’s disappointing 34-19 loss to the New York Jets.

I told him that, while I thought he was having a very solid season, I had a bone to pick with him. You see, every time he made a play, such as dropping a quarterback or stuffing a running back for a loss, I’d point my camera on him in hopes that he’ll do a spirited dance or some kind of joyous celebration. But it never happened.

Week after week, the 27-year-old just kind of looked over at the sideline and then jogged back to the huddle for the next play. And while that might make his old-school coaches smile, it does absolutely nothing for a guy like me who is standing around on the sidelines hoping to capture a compelling shot of the big fella.

We laughed about it and Bowen agreed to show a little emotion out there if the opportunity presented itself.

Fast forward a week and, sure enough, Bowen teamed with defensive tackle Barry Cofield for the only sack of the game against New England. And yet, when I locked the camera in on the six-year pro waiting for his breakout moment, it never happened.

“I froze up, man,” Bowen admitted to me in the post-game locker room. “It’s just not my forte. I’ve got to work on my dance moves. I’ve been asking my wife to help me and stuff, but she really doesn’t help me. I’m gonna have to study some moves from across the league.”

At that point I suggested I should enlist the help of Cofield, thinking maybe he could pretend to use his taser on Bowen and jolt a celebration out of his teammate.

“Yeah, Barry’s got to help me out,” Bowen said.

Another week goes by and once again, Bowen makes a huge play for the Washington defense.

During the third quarter, Bowen gave Giants guard Mitch Petrus a stutter step, froze him and then burst through the line. Manning saw him coming, but didn’t have enough time to get away.

Even though Bowen was falling down as he got to the quarterback, he was still able to grab onto Manning and pull him down for an eight-yard loss. On the next play, the Giants missed a 44-yard field goal attempt and the Redskins still held a 20-3 lead.

When I asked Bowen to share the first thought that popped into his head when he dropped Manning, his answer cracked me up.

“I said to myself I gotta think of a dance move for you,” he said with a laugh. “Because you always get on me, I knew I had to come up with something.”

Unfortunately for everyone involved, Bowen’s attempt to celebrate was less than stellar. It consisted of a primal scream and a spastic gyration. Needless to say, I wasn’t the only one who was disappointed.

“He’s got nothing. It’s terrible. It’s terrible,” Cofield said when asked to rate Bowen’s post-sack celebration. “It’s not because he’s humble either. It’s because he can’t think of anything to do.”

So I suggested maybe the next time Bowen got a sack Cofield could break out the taser on him.

*The highlight of this conversation was when rookie defensive lineman Chris Neild overheard Cofield and I laughing it up and talking about an offseason celebration clinic. Neild leaned over and asked his teammate if he could be a part of it. I’m pretty sure Cofield was joking and having fun with my goofy conversation, but his rookie teammate is now legitimately hoping the clinic actually happens. That makes me very happy.

Cofield and I aren’t the only ones who have noticed the one area lacking in Bowen’s otherwise stellar season.

“I try to tell him sacks are so hard to come by,” said linebacker Brian Orakpo. “You gotta have a dance, man. You gotta do something. You’ve gotta have a trademark or something. I guess Bo is still working on it.

“Seriously, it’s not selfish, but you’ve really got to take time in your free time and come up with something unique,” Orakpo continued. “I can work with him though. We’ll get it together because he gets a lot of sacks. He’s going to need something.”

In all seriousness though, Bowen is a first-class guy who has been one of the most consistent players on the defense all season long. While he’s never going to be the flashiest guy in the locker room, he’s been an absolute joy to cover this season and his teammates can’t say enough about the man on and off the field.

“He’s playing great this year,” Cofield said. “He went through a lot, but you’d never know. He always has a smile on his face and he’s been the MVP of the defensive line this year.”

If the worst thing a critic can come up with about Bowen is that he’s not good at showboating and celebrating, then he’s in pretty good shape.

I’m still going to give him a hard time until I finally see him break out of his shell, but even if it never truly happens I’m still glad to have the guy on my favorite football team.